Spokane City Council wanted your solutions to homelessness: Here they are Daniel Walters photo
Henry Valder was among dozens of citizens who gave suggestions to Spokane City Council on Monday night, Sapt. 25, regarding how they could better tackle homelessness.
When the city of Spokane laid down $150,000 in boulders near Interstate 90 and Bernard Street late last month, in part to discourage homeless people from camping in that area and leaving behind litter, the reaction was swift.

Many took to social media to condemn city leaders, with more than a few suggesting other ways that $150,000 could have been better spent.

So Spokane City Council President Ben Stuckart invited concerned citizens to come share their solutions for homelessness. Dozens took him up on that offer at the Monday, Sept. 25 meeting, which was set aside as an open forum.

And while there was the airing of grievances, many offered fixes to problems:

Storage lockers for homeless people to keep their possessions in:
Stuckart mentioned he'd heard this suggestion from multiple people leading up to the forum Monday.

More medical access on-site at shelters to minimize fire calls:
Richie Andal, a man who's been living at the House of Charity shelter, told the council that since the boulders went in and moved people toward the nearby shelters, he thought there'd been more of a burden placed on the shelter. Specifically, he said it seemed like there'd been more fire department calls, with seven calls to the shelter on Friday last week.

"A lot of people there are fine around two or three people, but get them around 10 or 12 and they're having meltdowns," Andal said. "As far as solutions, maybe some more medical services on hand so the paramedics don’t have to come out all the time? I know two of those people were just overstressed." 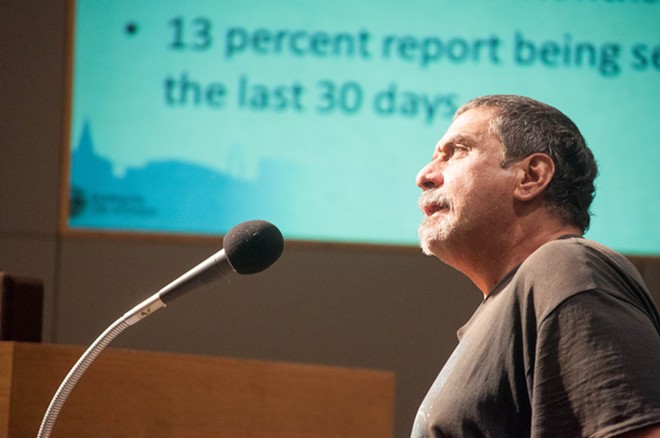 Daniel Walters photo
Richie Andal, a man staying at the House of Charity, shared his thoughts with Spokane City Council on Monday night.


Andal told the council they were doing a great job with services, but just wanted to make sure they knew the burden the shelter was on their fire department.

The council asked Catholic Charities' Rob McCann, who was in the audience along with other homeless service and shelter providers, to confirm if more people were staying at the shelter, which he did.

"If there was another shelter in town that would take the folks we have,
I’d stand right up there
and do the happy dance."
— Rob McCann, Catholic Charities

Daniel Walters photo
Rob McCann, CEO of Catholic Charities, confirmed that more homeless people are staying at the House of Charity.
When asked if smaller shelter spaces might decrease issues, including crowding and norovirus outbreaks that took place there last winter, McCann said he'd love it if other shelters would take the same folks House of Charity and pointed out that norovirus happens to rich people on cruises, too — it's not an illness that people get just because they're homeless.

Get rid of the sit-lie ordinance:
for the city to reconsider its rules against sitting and lying on the sidewalk.

One speaker chastised Spokane's self-designation as a "Compassionate City," calling out the basalt and other environmental designs meant to keep people from hanging around, and specifically calling out the sit-lie ordinance as a rule that only targets homeless people, which he tested.

Daniel Walters photo
Alfred Llamedo: tested out Spokane's sit-lie ordinance as a rule that targets the homeless.
"I was dressed in a suit with a briefcase sitting on the edge of the same flower pot, and then someone with a , he was told by the security guards to move, and I wasn’t," said Alfredo Llamedo. "It does target the homeless. It is discriminatory."

Stuckart said he would be happy to consider repealing the ordinance if there were another rule in place that could help deal with the problems that meant to diminish.

Put a just-cause eviction ordinance in place:
One of the best ways to fix homelessness is to prevent it in the first place, multiple speakers told the council.

"Whenever we’re having a conversation about homelessness, need to talk about why we are adding to the population every month," said Terri Anderson, an organizer with the Tenants Union of Washington State. "Tenants do not have protection. They can be served with notice for no reason whatsoever, and if they don’t move, they can be evicted." Ban the box for employment and housing:
Among the people face in getting housing and jobs to pay rent is the box that asks people to check if they've ever been convicted of a crime.

"Some of the specific solutions would be to ban that box," said Jan Shannon, a part-time volunteer pastor at Westminster United Church of Christ. "If somebody has done the crime and done the time, for God’s let them off. That’s called 'redemption' in the church."

More mental health advocates and resources
"What I've learned is that past the drug addiction, past the alcohol addiction, I think what we need is some mental health advocates who really understand trauma and how to overcome it," said Mercy Aguilar, a woman who is homeless. "Everybody that I have met on the streets, it all comes back to trauma, whether it be childhood or PTSD from being a veteran. To force them into a shelter, where they’re housed with all these other people, it’s too much." Create adult shelter:
Multiple speakers said there is a dire need for a shelter that is welcoming to people in the LGBTQ community, especially those who are transgender.

Jade Ann Annasta, a transgender woman who shared her experiences staying at shelters pre- and post-transition, and said she not only had to initially hide who she but was not welcome to some of the religiously based shelters. She said she'd been kicked out of a shelter for fighting with another woman at one point, and tried to have officers take her to jail rather than spend the night outside in bitter-cold winter weather that night, but since she hadn't committed a crime, they didn't take her in.

Daniel Walters photo
Jade Ann Annasta, who shared her struggles with local shelters as a transgender woman, said there's a need for a trans-friendly shelter.

The council gave the shelters a chance to answer whether they accepted people or not.

Major Ken Perine, with the Salvation Army, said they do accept all people who want help, and wanted to know who had turned the woman away for being transgender.

Phil Altmeyer, director of the Union Gospel Mission, said they do turn people away, including transgender individuals, if they think there will be a problem for their safety or the safety of others.

"We have chosen to say our shelter will be safe, so not only that person, but the people staying there, will be safe," Altmeyer said.

Daniel Walters photo
James Earl said the city should get more marijuana revenue from the state and put it toward solving homeless issues.

Stuckart said he'd love it if the state gave the city more marijuana revenue, and added that the city actually received less of that money this year than last year, even as sales have grown. This year's amount doesn't even cover the cost of one full-time police officer, he said.

Work on the voucher system:
Multiple people who were either homeless themselves, or worked with others who are, said that even when people get housing vouchers, they often wait for months, or more than a year, to find a place to live.

Give them meaningful work:
The city's panhandlers may soon be offered volunteer work with a stipend as part of a program called "Hope Works," modeled after an , New Mexico, program that went viral on social media.

The program will aim to help a handful of people volunteer in opportunities that will build their job skills, and be the first step toward connecting with services. Because it will be volunteer work, people won't need to have an ID already, though part of the program will likely be helping folks who want one get on the path to doing so, explained Mark Richard, president of the Downtown Spokane Partnership.

Daniel Walters photo
Mark Richard, president of the Downtown Spokane Partnership, shared a few ideas, including funding job training opportunities for people who are on the streets.

Other organizations partnering to make "Hope Works" happen include Goodwill, Catholic Charities and the city.

Currently, the program is getting set up, and they still need about $37,000, Richard said.

Stuckart, who said the city will cover that gap, added that he planned to get that item on the agenda as soon as possible.

A word cloud of what speakers told Spokane City Council on Monday night.