What's the best recent example of urban design in Spokane? Here's your chance to vote

That's what the Mayor’s Urban Design Awards are all about. The awards have been running biannually for the past decade.

"Two years ago, the Spokane Tribal Gathering place won the Mayor’s Urban Design award," says Omar Akkari, an designer with the city of Spokane. "That reclaimed an underutilized parking lot and turned it into this beautiful park. It opened up views to the river. "

But don't think the choice is just being left up to the snobby elites in their ivory towers. Voting has opened for the "People's Choice" award: Pick from seven options, ranging from the updated STA Plaza to Iron Goat Brewing's building.

You can vote online here, or vote in person at River Park Square until Oct. 6.

But wait: Before you vote, the city of Spokane wants you to take into account the "qualities of good design."

Ask yourselves questions about each building:

Does it appeal to our "intellect, emotions, senses and spirit?" Does it provide for public safety, by taking into account lighting, visibility, and pedestrian access? Does it clearly show which parts of the property are public and which are private? Can it be used for a wide array of activities? Is it designed for pedestrians first, cyclists second and cars last? Is it accessible to everyone, no matter their age or ability? Does it create a strong sense of "place," something that gives the community happiness and meaning? Is it easy to navigate and find your way around in? Is it good for the environment?

Then, and only then, pick from options:

Yes, those reports a few years ago that signs pointed to a "dim future" for the STA Plaza renovations were incorrect. Today, the proof is in the Plaza. The renovation is complete.

The brick exterior on Sprague Avenue was torn down and replaced with a window, so people could sit nearby and wait for their buses to arrive. Banks of real-time monitors were placed throughout the facility, allowing riders to check on bus locations up to the second.

The big escalator that divided the Plaza in two has been moved.

"Now that it's up against the south wall, it opens up the center plaza quite a bit more,"
STA spokesman Brandon -Betty says.

And the loud waterfall that thundered past the cougar statue has been removed, replaced with LED lights intended to flicker like a stream.

But the most effective change may have been the simplest one: Everything that most bus riders use, from fast-food joints to the lost-and-found, has been moved to the first floor.

"Our ticket sales and lost-and-found [visits] and questions from customers have skyrocketed since we put it on the first floor," says -Betty.

WSU Spokane
Washington State University's Spokane campus gets not one, but two nominations. Both the Spokane Teaching Health Center and the Pharmaceutical and Biomedical Sciences building are central to the transformation of the university from a mere health-sciences campus to the site of the state's newest medical school.

"These buildings are visual exclamation points for the mission of the campus, clinical and health sciences research," says Ken Roberts, vice-dean for academic and community partnerships at WSU Spokane.

The Spokane Teaching Health Center is particularly crucial to the development of doctors in the region. The facility is part of a partnership that has created 18 new residency slots, addressing the biggest bottleneck to adding more doctors to the Inland Northwest.

Roberts says the design does a few important things: The exam rooms are larger than a typical exam room, able to easily accommodate the presence of a physician, a and a student. And while the individual disciplines within medicine have their own workspace, they're directed toward a central core to encourage collaboration. That, Roberts says, is crucial as "as medicine becomes team-based and team delivered."

WSU Spokane
This facility before the intensity over the WSU medical school really began to heat up.

"It got two things done for us: To expand our ability to do research, and also have specialized teaching spaces for medical spaces and pharmaceutical students," Roberts says. "It does it in a way that that is wonderfully aesthetically pleasing, but very functional."

Roberts notes that the labs were built with an open design, easily allowing the space to expand or contract, depending on which faculty members are working there.

"Those open labs create a lot of space for collaboration," Roberts says. "The building also has collaborative study spaces, with a lot of whiteboards everywhere. You can pick up an erasable marker and jot your ideas on the whiteboard."

Roberts also praises the prominent open staircase that encourages students to walk up the stairs instead of taking the elevator.

"It looks out toward the river," Roberts says "The artwork that follows the staircase up and down is to mimic the river."


THE CORNER OF THIRD & WASHINGTON 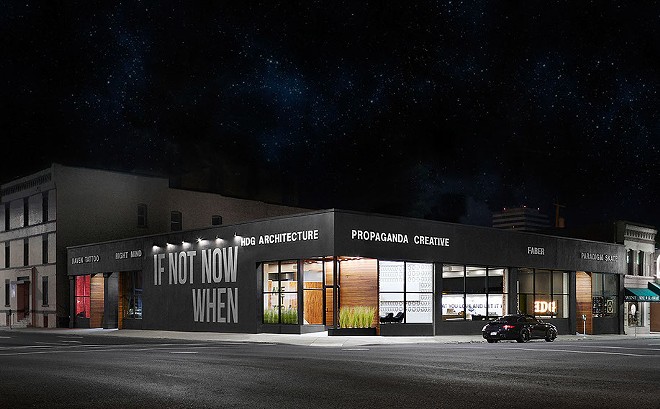 Few local design firms have imprinted their own signature style on the face of Spokane and Coeur d'Alene as quickly as HDG Architecture. When you see a building with big letters painted directly on a flat, colored wall? That's probably HDG.

So look at how HDG transformed the old, crumbling Carr's Corner building at the corner of Third and Washington into something sleek and modern.

"The condition of the building and the design we were after was going to work well together.
says Armando Hurtado,  and principal at HDG. "The building was decaying, and we didn't want to spend to repair what was there."

It allowed HDG to start largely from scratch.

"We just peeled away the years of layers, ceilings and walls, and just exposed the inherent, beautiful qualities of the building," Hurtado says.

The rooftop billboards were torn out. The surfaces were turned into flat canvases that allow  clear, simple fonts to stand out in dramatic ways. It's the headquarters for HDG Architecture and Propaganda Creative, and provides space for three tenants: Paradigm Skate Supply, Twisted Raven Tattoo, and Right Mind Printing.

"[We wanted] a unified look across all faces, which is usually a challenging thing to accomplish when you have tenants," Hurtado says. So any tenants had to agree to abide by the basic design of the building. No big signs out front. Stick to the clean look of the building.

"Everyone gets the same font, same color, including ourselves," Hurtado says.

Beyond hosting one of the best Trivia nights and slinging delicious Bánh Mì pizza (It's like a Bánh Mì sandwich — but as a pizza), Iron Goat Brewing is the classic example of modern urban transformation: Take an old auto parts store on Second Avenue, in a spot that can sometimes feel more like Sprague/ auto row, and turn it into a thriving open-space pizza joint.

What may have been a forgettable corner of Downtown Spokane near River Park Square has been transformed into one of the most striking architectural elements in the area.

"We were really trying hard to make it an exciting place that people can go," says ALSC Architects project manager and interior designer Tina Johansen. "STCU has been very eager to tie their branches to the community that they’re a part of."

Since STCU didn't have very many branches in an urban setting, this was a chance to capture the flair of the downtown core. ALSC Architects wanted to reflect the brick buildings downtown, while incorporating its own style.

"[STCU] wanted to partner with a local business and create a space that people could come and sit and do their banking and enjoy coffee," Johansen says. "We opened up the building and made it as transparent as possible toward the park. Inside, you could enjoy that view."

STCU paired up with Rocket Bakery, and ALSC tried to blend the feel of a hip coffee shop with the sleek professionalism of a respectable credit union.

In the words of ALSC: "The raw, eclectic aesthetic desires of Rocket and the more refined, polished desires of STCU resulted in a design solution that utilizes a wide variety of complementary materials and finishes, culminating in the shared mural painting."

Despite all the water flowing into this facility, "Spokane Falls CSO 26 Control Facility" is a very dry name. But the way the city has been using CSO tanks is actually pretty cool. First, they're building them as a way to stop stormwater surges from flooding directly into the river, a piece of the city's master plan to fight potholes, and save money while doing it.


But instead of just being satisfied with underground stormwater facilities looking like big gray tanks, the city sees these spaces as major opportunities. This tank on Spokane Falls Boulevard will lead the way for another plaza on top of it.

"The CSO 26 plaza creates an opportunity for a number of things," says city spokesman Brian Coddington: "A new vista and view of the river and the falls. A new trailhead for the new Gorge Loop trail. And an extension of the outdoor programming space outside the library."

Superintendent: Reardan student posted picture holding AR-15, said he was "ready to gun down some b—-"