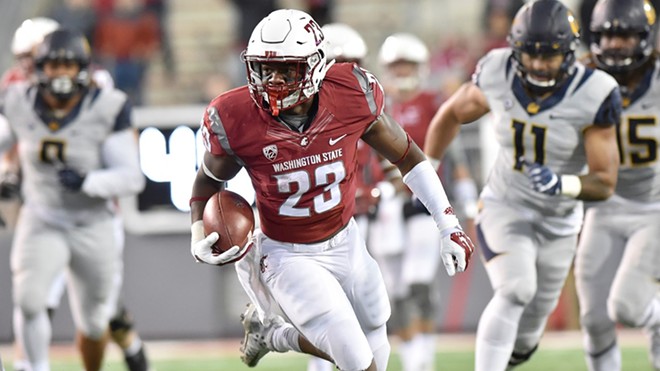 WSU Athletics
Last November, Gerard Wicks rambled for 128 yards against Cal, averaging more than 14 per carry, in WSU's 56-21 win.
A victory tonight in Berkeley would keep undefeated Washington State, the nation's No. 8 team, on the path to a potentially epic Apple Cup matchup. But the Cougars could face an unanticipated obstacle in the nationally televised Pac-12 North matchup with Cal at Memorial Stadium (7:30 pm; ESPN, KXLY 920 AM); poor air quality in the Bay Area resulting from Northern California's devastating wildfires.

After passing the season's first test away from home with flying colors (at least in the second half) in last Saturday's 33-10 win in Eugene, the Cougars (6-0, 3-0) play the second of five road games in their final seven contests; 3-3 Cal — which started promisingly, with non-conference wins at North Carolina and home against Mississippi under first-year head coach Justin Wilcox —  has lost all three of its games in the Pac by increasing margins and comes off a 38-7 beatdown at Washington last Saturday night, particularly notable for the Golden Bears' rushing total: minus 40 yards.

That's music to the ears of a Cougars defense that held the Ducks (who have a much better running game than Cal) to a paltry 2.9 yards per rush and just six first downs on the ground.

The Bears, who have surrendered an average of nearly 38 points per game in their three conference losses, couldn't do much to stop the Huskies on the ground or in the air, and it's hard to see how they slow down the Cougars, especially senior quarterback Luke Falk, who continued his assault on the Pac-12 record books in Eugene, throwing for three TDs, good for 19 this season (also the number of times he's been sacked) and 108 in his career, second in the conference all-time. USC's Matt Barkley holds the record of 116.

Eastern fans will see a familiar face on Cal's sidelines: longtime Eagles coach Beau Baldwin, who in his first year as the Bears' offensive coordinator and running backs coach, has yet to light a fire under the unit: Cal's offense resides at or near the bottom of the Pac-12 in nearly every offensive category. The Bears don't look likely to break out of their offensive doldrums against an Alex Grinch-coordinated WSU defense that's at or near the top in nearly every respective category.

And Greater Spokane League fans will see a familiar face on the Cal defense: inside linebacker Evan Weaver, who starred at Gonzaga Prep. The 6-foot-3, 245-pound sophomore has appeared in all six games, starting three, and led the Bears last week at Washington with six tackles, two for losses.

Last November, Falk strafed Cal for 373 yards and five TDs as the Cougars routed the Bears 56-21 at Martin Stadium, only their second victory in a dozen games vs. Cal, both in the Mike Leach era.

Has this game been scheduled for Wednesday instead of tonight, it would have been canceled due to unhealthy air quality in the Berkeley/Oakland area. Cal issued a statement yesterday saying it expected the game to go on as scheduled, due to improving air quality; if that turns out not to be the case, one possible option is moving the game south — where the air quality is much better — to Levi's Stadium, home of the San Francisco 49ers, who are on the road this week.

The NCAA's standards for air quality, as it relates to its athletic competitions:

The air quality index in Berkeley this week has been as high as 187.  Despite the conditions, the Bears have practiced outside all week; the Oakland Raiders, who practice in nearby Alameda, ended their workouts early on Wednesday.

One factor that could cause Cougar fans concern is injuries, especially on defense:  The Cougars — who lost Peyton Pelluer with a broken foot a month ago against Oregon State, likely ending the senior inside linebacker's college career — entered last week's game minus starting defensive end Nnamdi Oguayo, then lost two more inside linebackers, starter Isaac Dotson and Nate DeRider, a fifth-year senior who initially walked on, as well as cornerback Darrien Moulton, who departed with an apparent arm injury and reappeared on the sidelines wearing a cast.

Despite the injuries, the Cougs' defense got better as the game went on, shutting out the Ducks in the second half while forcing three turnovers, and redshirt freshmen Jahad Woods and Justus Rogers displayed great potential in the middle of the defense

If tonight's game comes down to a field goal (which doesn't seem likely), the Cougs are in good shape — kicker Erik Powell was named Pac-12 Special Teams Player of the Week, for the second consecutive week, after connecting on all four of his field goal attempts, including a career-high 52-yarder in the second quarter that gave WSU the lead for good. The previous week, Powell was true on all three of his attempts against USC, including a 32-yard game-winner late in the fourth quarter that broke a 27-27 tie.


Meanwhile in Cheney, Eastern Washington returns to Roos Field seeking its 12th consecutive Big Sky victory dating back to the beginning of last season, and Montana State doesn't seem like it's quite in a position to stop the Eagles, who are tied for No. 9 in the latest FCS coaches' poll. Eastern (4-2, 3-0), riding a four-game winning streak, is coming off a thrilling, come-from-behind 41-38 win at UC Davis that saw the Eagles rally from an 11-point fourth-quarter deficit; the Bobcats (2-3, 2-1) defeated Portland State 30-22 at home last Saturday, responding to high winds in Bozeman by resorting to an overwhelming ground game that accounted for 403 yards, averaging more than 7 yards per carry.

Sophomore quarterback Gage Gubrud, after a slow start, has been torrid during the Eags' streak, completing 141 of 209 passes (67.5 percent) for 1,655 yards and an eye-popping 18 touchdowns, running for three more scores (though his five interceptions are a slight concern) as Eastern has averaged near 50 points per game. Montana State has an emerging star of its own in sophomore Chris Murray, the 2016 Big Sky Freshman of the Year and a classic dual-threat QB who leads the Bobcats in rushing with 543 yards and three TDs, breaking the 100-yard mark the past four weeks, and has passed for eight more scores.