Washington State bounced back strong in Pullman after a week to forget, Eastern Washington's Big Sky winning streak ended at 12 at the hands of a new conference power, Idaho absorbed a big road loss and received a big check, and Whitworth got a major boost from its returning star, if only for a half. The Seahawks rode a stout defense and Russell Wilson's strong right arm to victory in New Jersey. Your Monday Morning Placekicker: 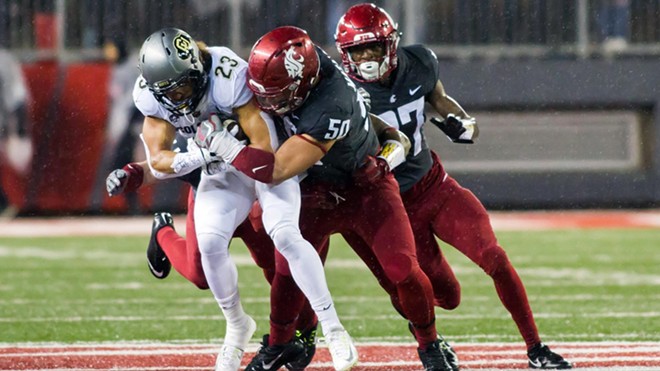 COUGARS MAKE A STATEMENT AGAINST COLORADO
Washington State's defense, shredded in last Friday's 37-3 loss at Cal that knocked the Cougars from the unbeaten ranks, made a powerful statement Saturday night at soggy, windy and chilly Martin Stadium: We're back.

WSU, which remains No. 15 in the AP Top 25 poll, pitched its second shutout of the season and first in the Pac-12 since 1994, methodically dismantling Colorado 28-0.

The Cougs, who bounced back from a week that saw them drilled 37-3 in Berkeley, then lose longtime athletic director Bill Moos to Nebraska, played without leading receiver Tavares Martin Jr., suspended after the Cal game. None of that mattered Saturday at Homecoming; WSU simply outclassed the Buffaloes. The numbers tell the tale: The Cougs outgained Colorado 406 yards to 174, including 194-80 on the ground and 212-94 in the air, as Luke Falk (17 of 34, 197 yards; 9 carries for 41 yards) shrugged off the less-than-ideal conditions, tossing scoring passes to Brandon Arconado and true freshmen Tay Martin and Renard Bell. Falk's 111th touchdown pass leaves him just five shy of Matt Barkley's Pac-12 career record.

"That was the worst offensive performance we've had since I've been a coach here," said Colorado head coach Mike MacIntyre. "Mainly, they just whipped us." Mike Leach's succinct postgame assessment of his Cougars, compared to the Cal game? "Less pathetic."

Washington State (7-1, 4-1 Pac-12) next takes a trip to the desert to face resurgent Arizona (5-2, 3-1), which just hung 45 points on a Cal defense that held the Cougs to a field goal the previous week. Kickoff is Saturday at 6:30 pm; it's Homecoming in Tucson and the Wildcats have a revenge motive as well; they were drilled 69-7 by WSU last November in Pullman. 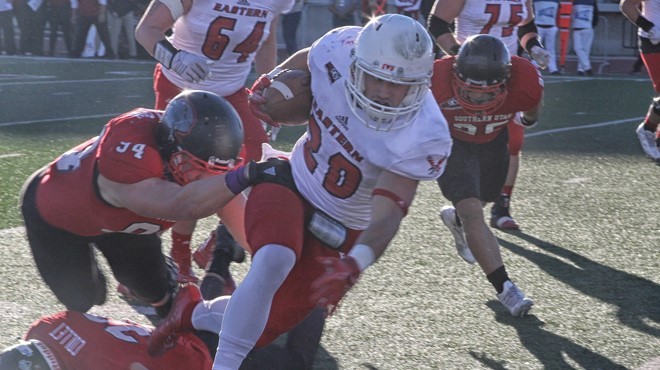 SOUTHERN UTAH ENDS EASTERN'S BIG SKY STREAK
All good things must come to an end; Eastern Washington's nearly two-year-long dominance of the Big Sky Conference is no exception. The Eagles, who hadn't lost a conference game since Nov. 21, 2015, came up short Saturday in Cedar City, Utah, falling 46-28 to Southern Utah,  which is emerging as a new power in the Big Sky.

The Eagles (5-3, 4-1), who in addition to their 12-game Big Sky run saw the end of a five-game winning streak, dropped four spots to No. 12 in the Football Championship Subdivision coaches poll. Curiously, Southern Utah (5-2, 3-1) remains unranked.

Things started well for Eastern, which jumped out to a 21-8 lead late in the second quarter on Dre' Sonte Dorton's 96-yard kickoff return, but an unrelenting Thunderbirds ground game, a suddenly stingy D and the strong right arm of QB Patrick Tyler combined to blitz the Eagles 38-7 from that point forward, though they led as late as 28-25 early in the fourth quarter. James Felila ran for 143 yards and two touchdowns as Southern Utah rolled up 272 of its 455 total yards on the ground, and Tyler tossed a trio of TD passes in the second half.

QB Gage Gubrud threw for 246 yards and a score and ran for 64 more, but completed just 24 of 44 passes and threw an uncharacteristic three interceptions. Eastern gets a bye week, followed by Weber State (5-2, 3-1) in Cheney on Saturday, Nov. 4; kickoff is 1:05.


VANDALS PICK UP CHECK, 47-POINT DRUBBING
In the big-time business that college football has become, it's known as a paycheck game: Go on the road to play at a hostile stadium against a much better team, and take home a check for several hundred thousand dollars.

Idaho followed the narrative to perfection Saturday in Columbia, Missouri, absorbing a 68-21 beatdown at the hands of Southeastern Conference also-ran Missouri. The Vandals (2-5) led early after Armond Hawkins' pick on the first play from scrimmage set up Scott Linehan's 7-yard TD toss to Kaden Elliss, but it got ugly fast. The Tigers responded with 34 first-quarter points, rolling up 282 yards of offense despite holding the ball for less than 5 minutes, and extended the lead to 51-14 at halftime. Linehan, sacked five times, was 19 of 32 for 139 yards, numbers that were dwarfed by Tigers QB Drew Lock (467 yards, six TDs).


KOLSTE RETURNS, POWERS PIRATES
Senior QB Ian Kolste returned from an ankle injury to complete 20 of 32 passes for 224 yards and touchdowns to Garrett McKay, Mason Elms and Michael McKeown, all in the first half, as Whitworth defeated Puget Sound 38-23 on Saturday at the Pine Bowl.

Whitworth visits Pacific (Oregon) next Saturday, with kickoff at 1 pm. 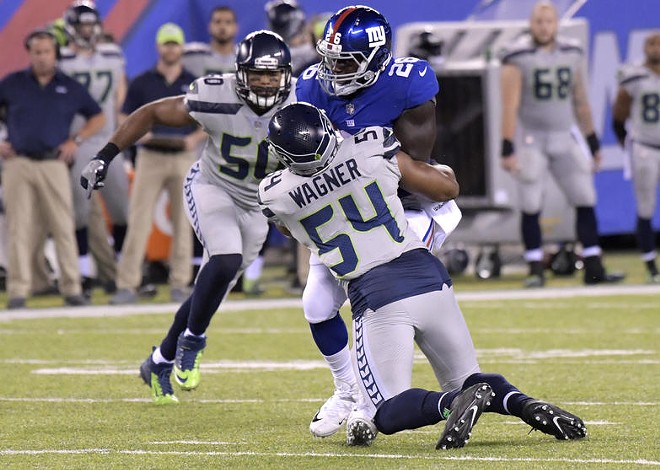 Seahawks.com
Bobby Wagner wraps up Giants running back Orleans Darkwa, while K.J. Wright closes in for the takedown.

HAWKS' D CUTS GIANTS DOWN TO SIZE
In an NFC lacking a dominant team, the Seahawks could be favored to advance to the Super Bowl if they had any semblance of a running game. Instead, one of the NFL's elite defenses carried the day once again on the road Sunday in a 24-7 victory over the Giants. New York made the Hawks' task easier by failing to field even one average NFL wide receiver; rookie tight end Evan Engram was Eli Manning's lone good option.

A salty Seahawks D made sure that Engram's second-quarter touchown was the lone score, holding the Giants to 177 total yards, 46 on the ground, and no first downs rushing. Seattle, which won Super Bowl XLVIII four seasons ago on the Giants' home field, beat New York there for the third straight time and improved to 4-2, a half-game behind the Rams for first place in the NFC West. Linebackers K.J. Wright and Bobby Wagner were in on 19 tackles, and second-year defensive tackle Jarran Reed enjoyed his best game as a Seahawk with seven solo tackles (two for loss), a sack and a forced fumble.

WIth Thomas Rawls (36) and Eddie Lacy (34) managing just 70 yards on their 22 carries, it fell to Russell Wilson to overcome a 7-3 halftime deficit; he came through in the second half, with touchdown passes to Doug Baldwin, Paul Richardson (who capped a flea-flicker by wrestling the ball away from Landon Collins in the end zone) and Jimmy Graham. After a slow start, Wilson finished 27 of 39 for 334 yards, with no interceptions.

Baldwin caught nine passes for 92 yards and provided the first half's defining image, yelling at Wilson and head coach Pete Carroll and shoving offensive line coach Tim Cable during a sideline disagreement in the second quarter. After the game, Baldwin said he had apologized to Cable, and took full responsibility for his words and actions. The Hawks, the NFL's fifth-most-penalized team, continued to be their own worst enemy, committing 15 penalties for 110 yards, including some drive-killers.

The 3-3 Houston Texans, coming off a bye week, arrive Sunday with the league's top rookie in quarterback Deshaun Watson, a taller, faster, stronger-armed version of Wilson who leads the league with 15 touchdown passes and has run for two more scores.

The division's big news came from an unlikely place: London's Twickenham Stadium, where the Rams improved to 5-2, throttling the Cardinals 33-0 and likely ending Carson Palmer's season; Arizona's starting quarterback departed in the second quarter with a broken left arm.

Rams rookie Cooper Kupp caught four passes for 51 yards and scored his third NFL touchdown on Jared Goff's 18-yard pass in the fourth quarter. The former Eastern star was a third-round steal for L.A.; through seven games, he's second on the team in receptions, with 23, and receiving yards (316; nearly 14 per catch), and leads the Rams in red zone targets and receptions. The Cardinals, who looked like the main threat to keep Seattle from its fourth division title in five years, fell to 3-4. The 49ers, not projected to contend, aren't. They're the NFC's (if not the league's) worst team, 0-7 after being drubbed 40-10 by the visiting Cowboys.