WSU at Arizona: After dominant win, Cougars will be tested by Tate in Tucson 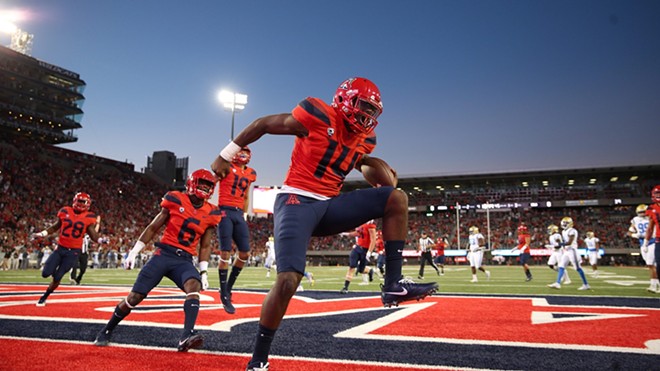 UA Athletics
Arizona quarterback Khalil Tate wants to dance all over Washington State's defense the way he has against Colorado, UCLA and Cal this month; the Pac-12's breakout star ran for 694 yards and seven touchdowns in the three victories.
Which Washington State team will show up in Tucson?

The one that rolled undefeated through the season's first six games, five at home (though wins over Boise State and USC in Pullman were close calls) and bounced back from its first loss with a dominant performance last Saturday against Colorado?

Or the one that was outplayed, outcoached, outschemed and outclassed in its one real test away from home, a 37-3 humbling at Cal two weeks ago? Last Saturday in Berkeley, Arizona hung 45 points on that Bears team in a one-point overtime win, the Wildcats' third straight in the Pac-12, with two on the road (Colorado, Cal) and one at home (UCLA).

It may not matter on Saturday night at Arizona Stadium (6:30 pm; Pac-12 Network, KXLY 920 AM) if Khalil Tate keeps playing at a superhuman level.

Arizona's surprising resurgence — the Wildcats, thought to be Pac-12 South cellar-dwellers, are 5-2, 3-1 in conference play — has been led by Tate, who's emerged in his sophomore season as the nation's top dual-threat quarterback, and it's not particularly close.

Arguably the closest thing that college football has seen to Michael Vick since his glory days at Virginia Tech almost two decades ago, Tate has gone through conference defenses like a hot knife through butter in October, racking up three consecutive Pac-12 Offensive Player of the Week awards. That hadn't happened in nearly 30 years, since 1988 when the player was USC quarterback Rodney Peete and the conference was the Pac-10.

The 6-foot-2, 215-pound Tate's numbers are eye-popping: since taking over midway through the first quarter for injured starter Brandon Dawkins in Boulder three weeks ago, he's struck for 1,162 yards in less than three full games; 694 of those have come on the ground, including video-game numbers against the Buffaloes — 14 carries for 327 yards (23.4 yards per), a Football Bowl Subdivision record for a quarterback, and four touchdowns, on runs of 58, 28, 47 and 75 yards. He threw 13 passes, completing 12.

There's more to Tate than his wheels — he's got a cannon for a right arm. Tate hasn't had to throw a lot, but when he has in October, he's completed 31 of 41 (76 percent) for 468 yards and four touchdowns, with one interception.

For the Cougars (7-1, 4-1), Tate is the one who got away — they recruited him out of Junípero Serra High School in San Mateo, California, where he was a four-star prospect, but only as a defensive back. Tate — who also had offers from Florida State, Nebraska, Texas A&M and Pac-12 schools USC. UCLA, Cal, Utah and Oregon State, wanted to play quarterback, not nickel back, and chose Arizona instead, believing that Wildcats coach Rich Rodriguez's high-powered offensive scheme would provide the best opportunity for a dual-threat QB. Turns out he was right; it just took a little longer than he'd anticipated.

WSU's defense, predicated on speed, has become one of the Pac's best under coordinator Alex Grinch, recording 64 tackles for loss (8 per game) and getting to the quarterback to the tune of 26 sacks; Arizona QBs have been sacked just five times. They shut down Colorado with authority last week, but haven't faced anyone with Tate's skill set. The closest they've come was another dual-threat QB, Montana State's Chris Murray. who led the Bobcats with 55 yards rushing, though it took him 17 attempts. Murray was a non-factor thorough the air, throwing for just 28 yards in WSU's season-opening 31-0 victory.

Befitting a team ranked No. 15 in this week's AP Top 25 poll, Washington State is favored —by 3 points, with an over-under of 64½ (hint: take the "over") — which given Tate's heroics is a reflection of just how bad Arizona's defense has been this season. They're surrendering nearly 37 points per game in Pac-12 games. That plays into the hands of the Luke Falk-led Cougars, who have averaged more than 50 points per game against the 'Cats the past three years, including a 45-42 victory in Tucson two years ago and a 69-7 romp last November in Pullman, a result that surely will be on the minds of Arizona coaches and players.

In two games against Arizona (Connor Halliday was the QB in 2014's 59-37 loss in Pullman), Falk has put up some ridiculous numbers of his own — 79 of 97 (81 percent) for 825 yards and nine touchdowns, with no picks. Keeping him upright is imperative for a WSU offensive line than has given up 34 sacks. He may need to replicate that kind of performance on Saturday night if the Cougars — who get leading receiver Tavares Martin Jr. back from a one-game suspension — want to keep pace with the scintillating Tate and surging Wildcats.

REVIEW: Anthony Jeselnik knows no boundaries, and it's hilarious