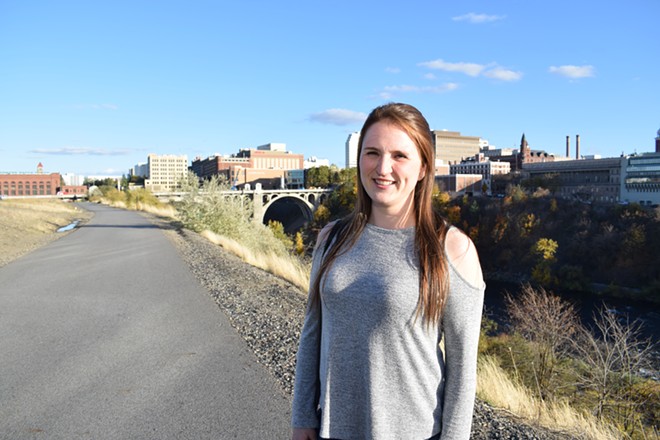 That was until she learned what teaching special education would really mean. She could teach a whole spectrum of students — students who were nonverbal, students with specific learning disabilities, students with dyslexia.

"It just felt a little bit more impactful for me," she says.

Now, Connor-Boyle is a second-year ABLE teacher (Autism and Behavioral Learning Environment) at Madison Elementary. It's the only ABLE elementary-school program in Spokane Public Schools. It takes kids, often autistic, who have displayed behaviors disruptive enough that they require specialized intervention.

"It's kind of like a rehabilitation," Connor-Boyle says. "You teach them calming procedures and more appropriate ways to get what they want."

Typically, these students have come from "designed instruction" classrooms, meaning the class is specially designed to help them achieve grade level. Sometimes, they struggle to communicate verbally, which can cause them to express themselves in other ways.

Consider a kid in a grocery store who wants a candy bar, but their parent won't give it to them. If the kid throws a tantrum, sometimes a parent will give in. For the kids who Connor-Boyle works with, that can reinforce that throwing a tantrum is a more effective way to communicate than words. And sometimes the kids hurt themselves to get what they want.

"Most of my kids, their behaviors have been reinforced because it's hard not to give a kid what they want if they are hurting themselves," Connor-Boyle says.

Connor-Boyle has eight students she's with from the time they get off the bus at 8:15 am until they get back on it at 3 pm. Four paraeducators give her some help in the classroom. Together, they work to provide structure and predictability, so the kids feel more comfortable. Than can mean teaching them a method of communication, like a sign or a picture, that's more effective than throwing a tantrum.

Connor-Boyle says she couldn't do it without the help of trained staff. One day, she says, a student wanted to run away. She remembered that particular student calms down when drinking water, so she stood in front of the door with an empty water bottle until one of the paraeducators came to fill it up.

"It's about that communication," she says. "And it's hard to trust each other and ask for help. That's hard to do. But we're definitely given enough resources to stay safe."

As teachers across Spokane Public Schools report feeling unsafe in their classrooms, Connor-Boyle says there is demand for more ABLE classes — and more special ed teachers. Her classroom can only take eight kids, but most designed instruction classrooms in the district, she says, have at least one kid who might be better served by an ABLE classroom.

"The goal would be to intervene early so they can be phased out before they go to middle school," she says.

Working with some of the highest-need kids in the district, she says, can be a challenge. But she says their good qualities outweigh the bad. Sometimes she thinks she's not making a difference. Then she steps back, and notices the little things: that, unlike before, one kid all of the sudden follows directions without extra prompting.

"At least once an hour one of my kids makes me smile, or laugh, or reaches out to me," she says. "And even though my kids have autism and people think they don't want or need other people, they do."
Each month, the Inlander will highlight a local teacher making a difference in our schools. Feel free to nominate a teacher by emailing wilsonc@inlander.com.

Arts Buzz: The latest events, awards and projects in our arts community