Arts Buzz: The latest events, awards and projects in our arts community


Spokane's art community is a busy bunch. There's never a shortage of events, calls for proposals, and other opportunities for artists (and everyone else) to get involved in the local creative scene. Without further ado, sit back and take a look at what's happening artistically of late:

A fourth and final sculpture denoting the boundaries of Spokane's Nettleton's Addition National Historic District was installed in mid-October. Local artist Steffan Wachholtz, also a resident of the historic district — part of the West Central neighborhood and named a National Historic District in 2006 — fabricated all four of the post-like sculptures from reclaimed steel and aluminum. Each of the signposts are located at primary entrances to the historic district; previous sculptures were installed along Chestnut Street at its intersections with Broadway, Boone and Maxwell avenues. The newest and final piece was installed along the Centennial Trail at West Bridge Avenue, overlooking the Spokane River. Each of the markers indicate whether pedestrians, cyclists or drivers are entering or leaving Nettleton's Addition or its neighbor, the Kendall Yards development.

Riverfront Park's snazzy new logo.
Last week, the city of Spokane's Parks & Recreation department and Spokane Arts hosted a public open house to reveal potential options for new public art installations as part of the ongoing Riverfront Park Redevelopment project. Award-winning lead artist, architect and urban planner Meejin Yoon shared several preliminary designs with attendees, for both a signature, large-scale art piece and overall art plan for the park that comes with a $500,000 budget. If you missed the open house, a video of the presentation can be found here. A final decision by the park's Joint Art Committee on Yoon's designs for the park is expected to happen this coming spring. In related news, a newly designed logo for Riverfront Park was also unveiled earlier this week.

In other public art news, Spokane's Public Facilities District is seeking proposals for an art installation at the INB Performing Arts Center. Specifically, the PFD is seeking applications from regional artists (with a preference for artists residing in the Spokane area) for plans for a large-scale artwork to be permanently installed in the center's lobby, with the potential for that art to extend into the outdoor breezeway between the INB and Spokane Convention Center. The public art project comes with a $150,000 budget. Interested artists can find more details about the project online, and submit their proposals here no later than Wednesday, Nov. 15.

This Saturday marks the annual Spokane Arts Awards, a culminating celebration of October's month-long spotlight on the regional arts community and the presentation of several notable accolades. Spokane Arts will not only announce winners of the arts awards' four categories, but also the incoming Spokane Poet Laureate and the recipient of the Spokane Arts Grant Award (SAGA) program's fourth and final round — a $10,000 cash prize. Proceeds from the formal event benefit Spokane Arts' programs, including the "Meet the Makers" short documentary series, public murals, the signal box art project and more. Tickets ($30/artists, students, seniors; $75/general) for Saturday evening's event, from 7-10 pm, are still available online. (Full disclosure: the Inlander is a media sponsor of the Arts Awards.) 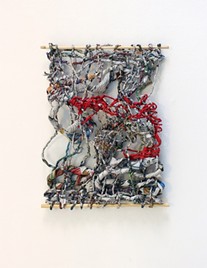 May Kytonen
"When Things Fall Apart;" newspaper, crepe paper, gold thread, 10' x 13'. 2017.
Recipients of Artist Trust's 2017 Grants for Artist Project (GAP) awards were announced last week, including several Spokane creators. The statewide arts nonprofit's flagship award program supports projects by artists in all stages of their career, and who live across Washington state. Of the 61 total awardees of this year's grants, four call Spokane County their home base: media artist and podcast creator Dylan Nelson, photographer Jonathan Adamshaspert, Spokane Tribe ancestral artisan Shawn Brigman and multiethnic fiber artist May Kytonen. Click on each artist's name to read more about their work and what they plan to use their grant award to accomplish.