NEWS: Washington ranks poorly compared to many other states when it comes to its policies for people accused of crimes who haven't yet been convicted, according to a report from the Pretrial Justice Institute.

MUSIC: Miss Deer Tick's show at the Bartlett? They almost did too, but after a late start, Dan Nailen says it was all worth the wait. 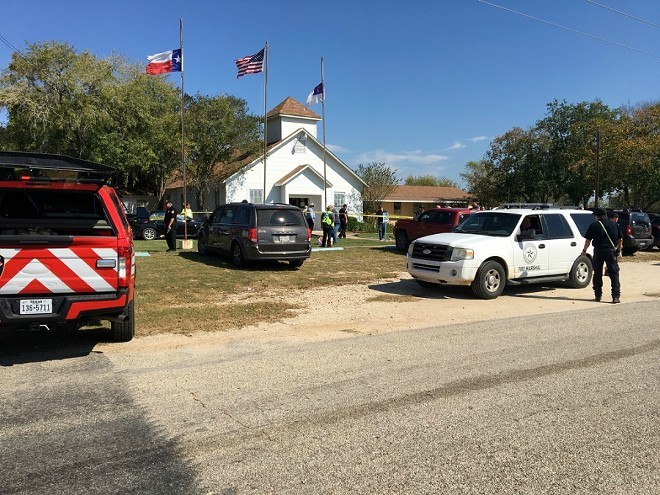 The New York Times
The scene Sunday outside the First Baptist Church in Sutherland Springs, where a gunman armed with an AR-15-style semiautomatic rifle killed 26 people and wounded 20 others, 10 of whom remain hospitalized in critical condition.

26 killed in shooting at Texas church
A gunman opened fire on parishioners at a church in a tiny town in south Texas on Sunday, killing a pregnant woman, children, and others, before driving away while chased by an armed bystander, the New York Times reports. The gunman was found dead with a self-inflicted gunshot wound, but it wasn't clear if that's what killed him.

6 inches more than normal
Over the weekend, Spokane received 6 inches more snow than we usually get by this time of year, setting a daily snowfall record Sunday, but most of it isn't sticking around. (KREM, Spokesman-Review)

Seahawks lose, and that makes us sad
No Seahawks player is willing to point fingers at their teammate for Sunday's 17-14 loss to Washington, the Seattle Times' Bob Condotta reports, as plenty of other areas of the team's play were lacking, but a lot of fans felt fine pointing out that the W could've gone to Seattle had kicker Blair Walsh not missed three field-goal attempts in the first half.

The horror of the Blair Walsh Project has peaked. #Seahawks

Seahawks, pay me what he’s making. I’ll miss field goals too. Should have known not to pick his ass up after watching him choke in playoffs.


Trump's circle was in contact with Russia
At least nine people in President Trump's inner circle were in touch with Russia during the campaign, theWashington Post reports, though special counsel Robert Mueller still needs to determine if those incidents amount to intentional collusion with the Russians.