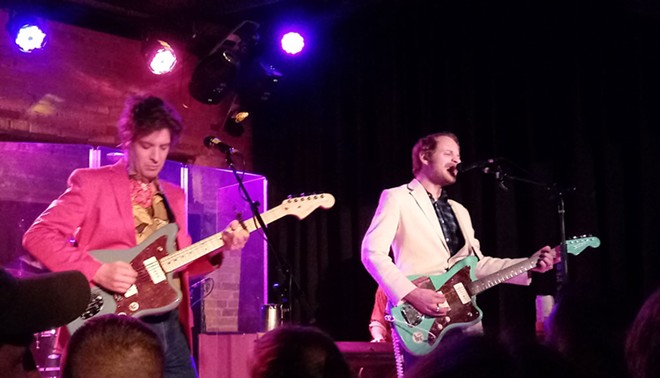 For a while on Thursday, it looked like Deer Tick's first-ever visit to play Spokane would fall to this year's Curse of Halloween Week that caused Silversun Pickups to quit after four songs Tuesday night at the Knitting Factory, The Courtneys to cancel their Friday show due to weather and The Weather Station to cancel their scheduled Saturday night show at the Bartlett. A broken-down tour bus in Boise didn't bode well for the Rhode Island roots-rockers, and the planned 8 pm start time, and then rescheduled 9:30 pm show launch, ended up being a 10:30 pm-ish kickoff following an extended loitering session in cold, drizzly rain outside the Bartlett, while the band did a not-so-quick sound check inside after they finally arrived.

And you know what? The show was totally worth the wait for the fans who hung around and (mostly) filled the club, as Deer Tick roared through a career-spanning set that was at turns thrilling, heartbreaking and hilarious.

Plans to play two sets — one acoustic, one electric — went out the window due to the late start, and comedian Jena Friedman, the opening act, only did about five minutes of jokes to a well-lubed audience before singer/guitarist John McCauley, guitarist Ian O'Neil, bassist Chris Ryan and drummer Dennis Ryan hit the stage and proceeded to knock out about 25 songs, playing well past midnight.

The band's two new albums, Deer Tick Vol. 1 and Deer Tick Vol. 2,  are split between all-acoustic and all-electric tunes, but Thursday night it was mostly electric throughout, save the occasional appearance of a mandolin here and there. The new acoustic songs were still excellent, delivered with added muscle (and an assist from a touring keyboard player), and all the new material fit in easily with a catalog that has touched on everything from folk and country to blues and garage-rock on the band's releases over the past decade.

McCauley is a remarkable craftsman in penning his songs, which was clear as the band started the show with three straight new tunes. The sweeping, gorgeous "Sea of Clouds" and shuffling "Card House" immediately indicated that the soundcheck had worked, as the band sounded great from the start, McCauley's rasp leading the way. Both of those songs are acoustic on record, and the churning "Jumpstarting" from Vol. 2 that came next could be an homage to the power-pop side of Guided By Voices; it killed. 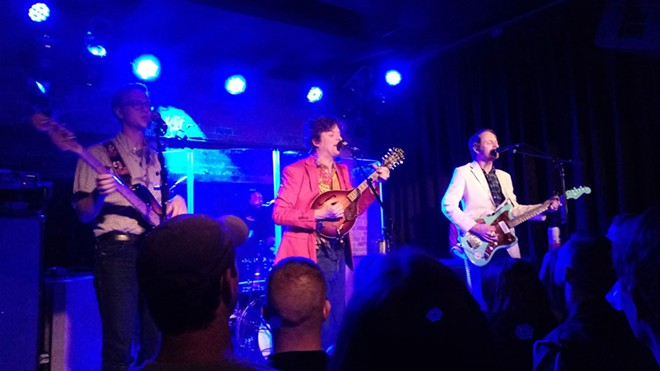 Dan Nailen
Deer Tick arrived late and played late into the night Thursday at the Bartlett.
From there, the band bounced across pretty much every album they've ever made, stretching as far back as their 2007 debut War Elephant for nice versions of "Baltimore Blues No. 1" and "These Old Shoes." O'Neil took lead vocals on a couple of tracks ("The Dream's in the Ditch" and "Look How Clean I Am"), as did drummer Dennis Ryan. At some points, the four-part harmonies among band members were goose-bump-inducing, and some of McCauley's lyrics beg for more quiet contemplation than a boisterous bar scene (I'm thinking of "Not So Dense," with searing lines like "Have you ever been in the corner of a room, and it feels like the farthest corner of the world?"). But I'm not complaining; for the most part, the crowd shut up for the occasional quiet moments.

Deer Tick also showcased their proclivity for killer cover tunes Thursday night. The Pogues' "White City" mid-set was a rambunctious treat, and Dennis Ryan's spirited take on Chris Montez's 1962 hit "Let's Dance" wasn't even needed to get the crowd moving, but it was great. Among the other highlights of the show were the raucous "The Bump," the soaring "Hope Is Big," as well as "Only Love," "Art Isn't Real (City of Sin)" and "Ashamed."

In their encore, as McCauley thanked the crowd for sticking around and pronounced his hopes that it won't take Deer Tick another decade to visit Spokane again, he launched into "(What's So Funny 'Bout) Peace, Love and Understanding," the Nick Lowe tune made most famous by Elvis Costello, and the band shut it down with a surprisingly touching take on Joe Cocker's "You Are So Beautiful."

You can't really ask for a better distillation of a band on their first visit to town than what Deer Tick delivered Thursday night.

WSU vs. Stanford: Cardinal's Love will start, as will Falk in final home game