WSU vs. Stanford: Cardinal's Love will start, as will Falk in final home game

In Cheney, it won't come easy for Eastern against Weber State 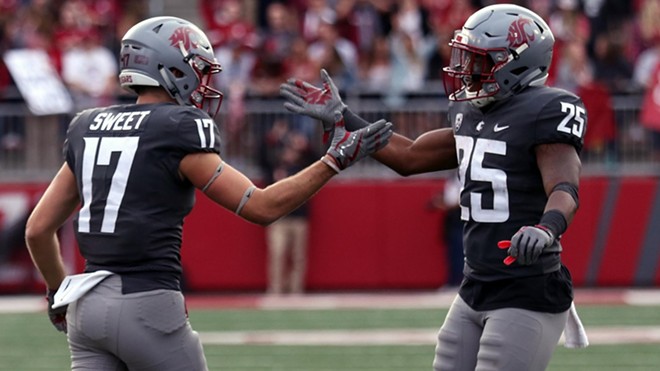 WSU Athletics
Senior captain Jamal Morrow, right, who has averaged 7.1 yards per carry, caught 39 passes out of the backfield and leads the Cougars with eight touchdowns, will play for the final time at Martin Stadium on Saturday.
Two weeks ago, Washington State responded to a resounding defeat on the road (37-3 at Cal) with an impressive victory at home (28-0 over Colorado).

Falk was uncharacteristically ineffective in the first half last Saturday night at Arizona, completing 13 of 23 passes for 93 yards and a touchdown, throwing his final pass with a little less than six minutes left in the second quarter and the Cougs trailing 17-7.  With the Wildcats up 20-7, head coach Mike Leach opted to go with sophomore QB Tyler Hilinski, who drove WSU downfield, completing seven of eight passes for 59 yards and capping the scoring drive himself with a six-yard run. When the Cougs lined up for the first snap of the second half trailing 23-14, it was Hilinski, not Falk, under center, and WSU's all-time leader in nearly every meaningful passing statistic would be a spectator for the rest of the game.

With the Cougs unable to mount even a semblance of a ground game (17 rushes for 51 yards; meanwhile, Arizona shredded the WSU defense for 310 yards on 34 carries), Hilinski threw the ball all over the yard in the second half. Some of his numbers were impressive — 509 yards on 45-of-61 passing, with two touchdowns through the air and two more on the ground; he even guided the Cougs to a 27-23 lead early in the third quarter.

But the most important number was anything but: Hilinski, who's far more of a risk-taker than Falk, often bordering on recklessness, gifted the Wildcats with four interceptions — including Colin Schooler's devastating, 66-yard pick-six early in the fourth quarter, as Arizona blew the game open and eased to a 58-37 victory. The loss nearly dropped Washington State out of the national rankings, as the Cougs fell 10 places to No. 25 in the AP Top 25 poll.  They were also 25th in the initial College Football Playoff rankings.

Falk is one strong game away from topping the the Pac-12 record books in two significant categories; at 13,464 career passing yards, he's 137 away from overtaking Oregon State's Sean Mannion. With 112 career touchdown passes, he's four short of the record Matt Barkley set at USC.

Leach announced on Monday that Falk would start against the Cardinal. Which version of Falk shows up on Saturday will have a lot to do with whether the Cougars (7-2, 4-2 Pac-12) can find a way to defeat Pac-12 North Division-leading Stanford (6-2, 5-1) for the second straight year after ending an eight-game losing streak to the Cardinal. Washington State, which finishes the regular season at Utah and Washington, needs a victory to keep its flickering hopes to win the division alive.

Stanford has a personnel issue of its own — the health of running back Bryce Love, who suffered an ankle injury in an Oct. 14 win vs. Oregon and sat out the Cardinal's 15-14 win at Oregon State last Thursday night. That's the only time Love has been stopped this season; the junior thrust himself into the middle of the Heisman Trophy discussion over the course of the season's first seven games, racking up 1,387 yards (10.3 per carry; 198 per game) and 11 touchdowns, including a 301-yard, three-TD performance against Arizona State.

The Cardinal were fortunate to beat the Beavers, the Pac's worst team, rallying in Corvallis for the game-winning touchdown with 20 seconds on the clock. Love's absence was glaring; his team averaged a paltry three yards per rushing attempt without him. Stanford announced Friday afternoon that Love will play in Pullman. One change for the Cardinal will come at quarterback, as sophomore K.J. Costello replaces senior Keller Chryst, who flailed all night long in Corvallis before throwing for the game-winner.

The weather will be a wild card at Martin Stadium, forecast as snow showers or a rain/snow mix, with temperatures in the low-to-mid 30s. Wind, however, is not expected to be a factor.


Meanwhile in Cheney, Eastern Washington has had nearly two weeks to lick its wounds after suffering its Big Sky Conference loss in almost two years. The Eagles (5-3, 4-1 Big Sky) had better put that 46-28 defeat at Southern Utah on Oct. 21 behind them, because Weber State — which beat Eastern 14-13 in Cheney two years ago; the teams didn't play last year — is more than capable of extending that skid to two games Saturday afternoon at Roos Field. The Wildcats are doing it with defense, the Big Sky's best, giving up just 17.4 points per game. The Eagles' defense? 36.4 per game, second to last. Eastern can score (34.9 ppg), but Weber's not far behind at 33.4.

Quaterback Gage Gubrud is Eastern's top offensive weapon, throwing for 21 touchdowns and running for four more, but Weber is leading the Big Sky against the run (124 yards allowed per game; just six TDs) and stopping the pass: the Wildcats are allowing opposing QBs to complete just a tick over half of their passes and giving up only 215 yards per game (Gubrud is completing 64 percent of his passes for 332 yards per).

The teams have five opponents in common, all in the Big Sky; Weber faced Southern Utah at home, falling 32-16. Eastern rallied to edge Montana 48-41 in Missoula; the Wildcats beat the Griz 41-27 in Ogden, Utah. Montana State fell 31-18 at Eastern, 25-17 at home to Weber. Eastern romped past Sacramento State 52-31 at home; the Wildcats beat the Hornets 31-24 in Sacramento. Gubrud rallied the Eagles to a 41-38 win at UC Davis; Weber crushed the Aggies 41-3 in Ogden.

Eastern is ranked 11th in the Football Championship Subdivision Top 25 coaches' poll; Weber State (6-2, 4-1), is 14th. The Wildcats may be higher than that in next week's poll. 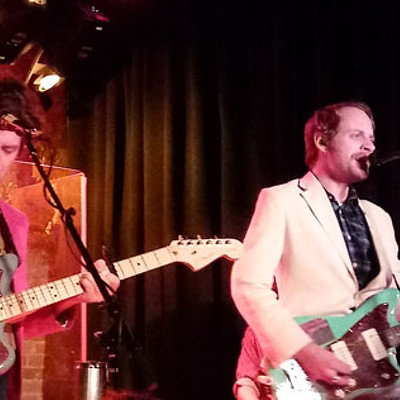