NEWS: You already knew that Washington state Attorney General Bob Ferguson likes suing the Trump Administration. Now, thanks to our running tally, you get to know exactly how many times he's sued Trump — it's up to 17.

SPORTS: Gonzaga's formula for success on the court has much more to do with player development than one-and-dones.

Son accused of murdering father
What apparently started as some sort of family dispute north of Spokane ended with a 35-year-old man, Matthew Bossard, murdering his father, Robert, and leaving his body in the bathtub, according to police. (Spokesman-Review)

Justice served
Kyle Odom was sentenced to 25 years in prison yesterday, a year and a half after he wrote a manifesto about an alien conspiracy to enslave the human race, then shot a Coeur d'Alene pastor who he suspected was part of it before fleeing to Washington, D.C., where he was arrested throwing items over the White House fence. (KXLY) 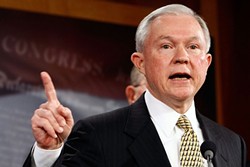 Attorney General Jeff Sessions:
Selective memory in House testimony.
Attorney General Jeff Sessions is being grilled by the House Judiciary Committee about his contacts with Russians during the 2016 election, and he's having a hard time remembering things that might incriminate him. As the New York Times puts it: "Mr. Sessions said he could not remember much about Russian influence on the Trump campaign, except when he could block such influence."

Wikileaks messages leaked
As his dad underwent his presidential campaign, Donald Trump Jr. was secretly messaged several times on Twitter by WikiLeaks, which solicited Trump Jr.'s cooperation on a series of requests, some of which Trump Jr. followed through on. (The Atlantic)

Get your RVs and boat trailers off the street today, Spokane