Long-term relationships are the key to Zags' success 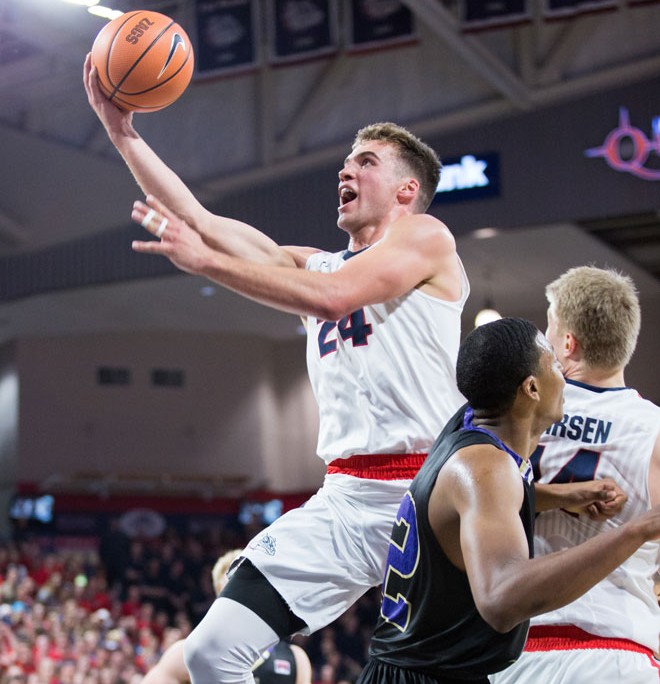 Libby Kamrowski
Freshman Corey Kispert made an impression in the Zags' first game on Friday, starting and scoring 10 points.
Gonzaga struck a familiar balance of old and new in the team’s 97-69 opening night victory over Texas Southern on Friday at the Kennel.

Despite those numbers from Gonzaga’s trio of veterans, it was freshman Corey Kispert’s 10-point performance, in an all-around solid collegiate debut, that stands out the most. Not that Gonzaga’s youngest players stepping in and shining from day one is anything new.

“He’s somebody physically that is ready to walk right up there,” Bulldogs head coach Mark Few said of Kispert.

Standing 6-foot-6 and weighing 215 pounds, Kispert is a menace on the wing, capable of draining threes or driving to slam home dunks. For a guy just out of high school, his game is about as complete as they come, though that’s become quite common.

Today’s college basketball landscape is dominated by overhyped, highly touted freshmen who come to college only because they have to. NBA rules require players be one year removed from high school, at a minimum, in order to enter the draft.

The nation’s most elite programs, like Duke and Kentucky, load up on these players every season. For many one-and-done players, the thought process is that if you have to spend a year in college, you may as well spend it somewhere with a good shot at winning a national championship.

At a school like Gonzaga, which until last season wasn’t in that conversation, trying to get those players on campus is simply a fool’s errand.

Less than five months ago, Zach Collins became the program’s first one-and-done player when he was selected with the 10th overall pick in the NBA Draft. Collins played his way into the draft, though; nobody expected him to make the jump straight from high school, even had it been allowed.

So Mark Few, and coaches like him, build the old-fashioned way.

For years, Few and his staff have built teams around a core of veteran players, ones who were better as upperclassmen than they had been as freshmen. Last season’s team made the title game led by a fifth-year senior in Przemek Karnowski and a fourth-year junior in Nigel Williams-Goss. All five starters on 2015’s Elite Eight team were upperclassmen. Even Adam Morrison in 2005-06, the season he was named National Player of the Year, needed a supporting cast of juniors and seniors to help him to the Sweet 16.

Each of those successful squads was veteran-laden, sure. But they all have something else in common. Each had a freshman who stepped up from the very start of the season.

Last year it was Collins coming off the bench. In 2015, it was Domantas Sabonis. And more than a decade ago, when Morrison’s mustache was the talk of the town, it was a point guard from Chicago named Jeremy Pargo. All three of those freshmen, after collegiate careers of varying lengths, went on to make good money playing in the NBA.

It’s too soon to tell if that’s in the cards for Kispert, and certainly nobody expects he’ll make that jump anytime soon. But honestly, that’s probably a good thing for both Kispert and Gonzaga.

Kispert helped King’s High School in Shoreline, north of Seattle, win back-to-back state titles at the 1A level as a junior and senior. He’s a four-star recruit who chose to stay in-state despite offers from Virginia and Notre Dame. On Friday night, he showed that he’s ready to play at the collegiate level, though that’s not to say he’s a complete player just yet.

So Kispert gets to spend some years learning from one of the best in the game, and Gonzaga gets yet another immediate-impact freshman ready to head down what is now a well-trodden path.

Now that’s a win-win for a program, and a player, very much used to coming out on top.

See you in court: A running tally of the times Washington has sued the Trump administration

As Congress punts, states continue to take cannabis legalization into their own hands