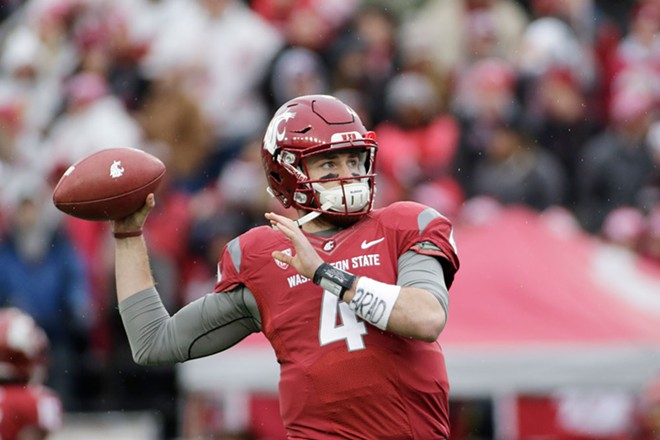 WSU Athletics
Luke Falk set the Pac-12 career record for touchdown passes; he currently has 118 TDs in his four years as a Coug.
Thanks to some stellar D in Salt Lake City and another horrid road trip for UW, Washington State took control of the Pac-12 North over the weekend, while Eastern Washington and Whitworth both won as well. Let's break down the weekend's football action:


COUGS GET DEFENSIVE AT UTAH
With Luke Falk setting the Pac-12's all-time record for touchdown passes and the Cougar defense forcing seven turnovers, Washington State cruised to a win at Utah on Saturday in a game that wasn't really as close as the final 33-25 score.

Falk will get the headlines for setting the record in his home state — he threw for 311 yards and three touchdowns — but the real story of the game was defensive tackle Hercules Mata'afa. He was seemingly everywhere in the Utah backfield, tallying three sacks and countless disruptions.

Coupled with Washington's 30-22 loss at Stanford Friday night, the Cougars suddenly find themselves atop the Pac-12 North with one game to play — at Washington on Nov. 25 in the Apple Cup. Win the game, and the Cougs will face off against USC on Friday, Dec. 1, for the Pac-12 championship and a berth in one of the big-boy bowl games.

Washington State rose four places to No. 15 in the AP Top 25 rankings after the win — one place ahead of the Huskies, who fell from ninth — and has a bye week coming up. 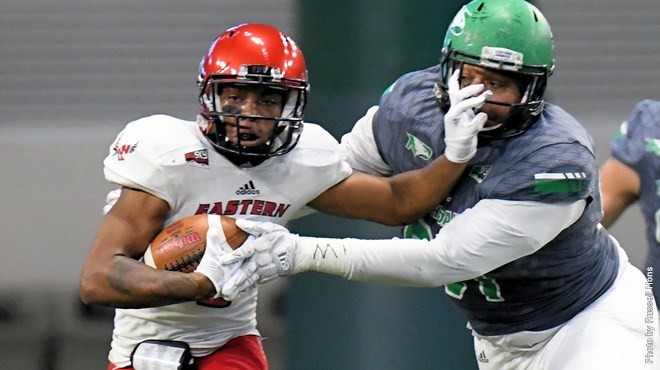 EWU Athletics
The Eagles pushed their way past North Dakota 21-14, keeping their dim playoff hopes alive.
EAGLES' SURPRISING TRIP TO GRAND FORKS
At the beginning of this season, Eastern Washington and North Dakota were predicted to be living large atop the Big Sky, a year after they tied for the conference title without playing each other.

Instead, both teams have found the going rougher than predicted. Injuries decimated the Fighting Hawks early on, and they've struggled all year. EWU has been up and down, and a week after star quarterback Gage Gubrud was arrested and suspended for the teams' showdown Saturday, it wouldn't have been surprising to see the Eagles go down. Instead, backup quarterback Eric Barriere and running back Sam McPherson did just enough to get the Eagles a 21-14 win on Saturday.

The win leaves the Eags at 5-2 in the Big Sky, tied for fourth place with Montana and Sacramento State. They're currently ranked No. 20 in the FCS, and they host Portland State on Saturday. They need a win and good luck to get in the playoffs starting Nov. 25.


WHITWORTH ENDS SEASON IN STYLE
The Pirates finished their season by crushing winless Willamette 57-24, and quarterback Ian Kolste went out in style in his final home game, throwing for 264 yards and five touchdowns. Whitworth finishes 8-2 overall and 5-2 in the Northwest Conference, good for second place. Linfield once again was the class of the NWC, going undefeated in conference play and 8-1 overall, and going to the NCAA Division III playoffs.

Long-term relationships are the key to Zags' success