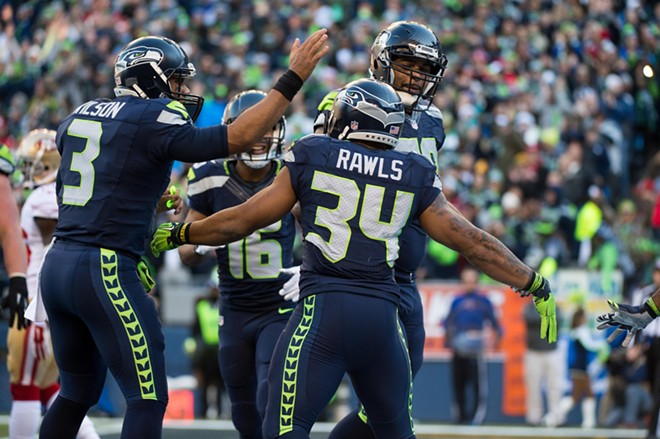 Seahawks.com
Russell Wilson, Thomas Rawls and the rest of the Seahawks hope to have something to celebrate tonight in their only Monday Night Football appearance when they host the Falcons, who knocked them out of last season's NFC playoffs.
In the aftermath of Richard Sherman's season-ending ruptured Achilles tendon, Seahawks fans could at least take comfort in the return of Earl Thomas, who plays Monday night after a two-game, three-week absence as the 5-4 Falcons, away from home for the fourth time in their past five games and looking nothing like the NFC champions they were just nine months ago, come calling.

But that was before the news that Kam Chancellor's season is almost certainly over as well, ended by a neck injury — first diagnosed as a stinger — he suffered in the Cardinals' final possession in the Hawks' costly 22-16 victory at Arizona on Nov. 9. The Hawks are likely to place the four-time Pro Bowl strong safety on injured reserve, ending his season early for the first time in his eight-year career.

What was likely Chancellor's final game of 2017 was also his best — nine of his team-high 10 tackles were solo stops; he knocked down a Drew Stanton pass; forced Adrian Peterson's fumble on the first play from scrimmage, setting the Hawks up at the Cardinals' 48; and tackled Peterson, like Chancellor a future Hall of Famer, in the end zone for a safety that gave the Hawks a 9-7 lead early in the second quarter.

As with fellow eight-year veteran Thomas, who has inserted himself into Comeback Player of the Year discussion — he broke the tibia in his left leg in Week 13, ending his 2016 season — Chancellor entered the season coming off surgery, in his case to remove bone spurs from both ankles.


In this case, the next man up is Bradley McDougald, signed away from the Buccaneers as a free agent to a one-year, $2 million deal in March, a little-noted transaction at the time that's proving to be a big deal in light of the Seahawks' suddenly injury-riddled secondary.

McDougald spent the past two games filling in for Thomas, a four-time Pro Bowl free safety who along with middle linebacker Bobby Wagner is the quarterback of Seattle's defense, responsible for diagnosing offensive formations and getting his teammates in the right position before the ball is snapped. Now he switches over to strong safety, tasked with replacing Chancellor, the defense's soul, a physical, intimidating enforcer and tone-setter.

At 6-1, 210, McDougald was a bigger option at free safety than the 5-10, 202-pound Thomas, but at strong safety is nowhere near Chancellor's chiseled 6-foot-3, 230-pound frame. In three-plus seasons in Tampa Bay, the fifth-year pro with strong ball skills — he was a two-way player (wide receiver/safety) his first two college seasons at Kansas — started 36 games at free safety, including 31 of 32 his final two years.

The cavalry has arrived in a besieged Seahawks secondary in the form of Byron Maxwell, who spent his first four seasons with Seattle, playing a meaningful role on two Super Bowl teams, but left in 2015 for a six-year, $63 million deal from the Eagles; he played just one season in Philadelphia before being dealt to Miami. The Hawks are fortunate to have another veteran corner in Jeremy Lane, who steps in for Sherman; the nickel back, sent to Houston in the Duane Brown trade three weeks ago, was returned by the Texans after failing his physical.

It will be the first time since January 2011 that the Seahawks take the field without Sherman's presence as a shutdown corner; since then, their defense has never been without two among the trio of Sherman, Thomas and Chancellor.

Falcons quarterback Matt Ryan has had success against the Seahawks, even with all of their best defensive backs healthy, completing two-thirds of his passes and averaging 260 yards in six games in the Pete Carroll era, and throwing for three touchdowns in four of them, including a 36-20 victory in January in an NFC divisional playoff game in Atlanta.

Former Huskies and USC head coach Steve Sarkisian, regarded as an offensive savant of sorts at the college level and hired by then-Trojans coach Carroll in 2001, has been a bust in his first season as offensive coordinator in Atlanta, responsible for an offense that has scored just 197 points (a 21.9 average) through nine games; the Falcons racked up 540 points (a 33.8 average) last season under Kyle Shanahan, who left to coach the 49ers.


As long as Russell Wilson (290 yards, one touchdown, four fumbles; Seattle has recovered all of them) remains the Seahawks' leading rusher, they're going to have a tough time advancing in the playoffs — if they even get there. If the season ended right now, they'd be the NFC's sixth seed, with no possibility of a home playoff game. A loss to the Falcons would knock the Hawks down to a tie for seventh in the conference; a win would tie them with the Rams, who lost 24-7 at Minnesota on Sunday, for the NFC West lead.

But an even bigger factor in making (or not making) the postseason has been a constant all season — the team most likely to beat the Seahawks is the Seahawks. It's not just the sheer volume of penalties — 94 for 780 yards, both league highs — it's their timing and the detrimental effect they've had on this team's momentum on offense, and lack of ability to blunt opponents' momentum on defense.

C.J. Prosise's sprained ankle vs. Arizona doesn't help matters, though Prosise, a second-year player from Notre Dame, has played in only five games, getting just 11 carries for a paltry 2.1 yards per. He's averaging a career-high 14.5 receiving yards, but on just six catches. Next man up is Mike Davis, a third-year pro signed off the practice squad who represents a far more conventional running back skill set than the speedy but fragile Prosise. Seattle lists left tackle Duane Brown (ankle) and defensive tackle Jarran Reed (hamstring) as questionable. Also out are outside linebacker Michael Wilhoite (calf) and Luke Joeckel (knee), who has started every game at left guard and will be replaced by rookie Ethan Pocic.

The Seahawks, the most successful team in the history of Monday Night Football (23 victories in 34 games, 67.7 winning percentage) have won 11 consecutive Monday night games dating back to 2005, second only to the Raiders' 14 straight wins from 1975 to 1981. 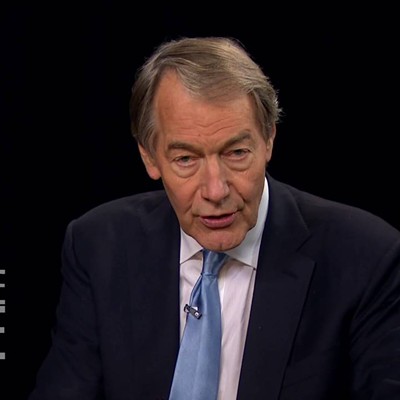