MONDAY MORNING PLACEKICKER: 7 wins not enough for EWU, no bowl for Idaho


It was a limited football schedule over the weekend; Washington State enjoyed a bye week before next Saturday's Apple Cup in Seattle, with the Pac-12 North Division title at stake for the Cougars. Whitworth's season ended last week, and the Seahawks don't play until tonight. Eastern Washington won big on Saturday, then lost big Sunday morning, and Idaho started its gift-giving early, handing a 1-9 team its second win. 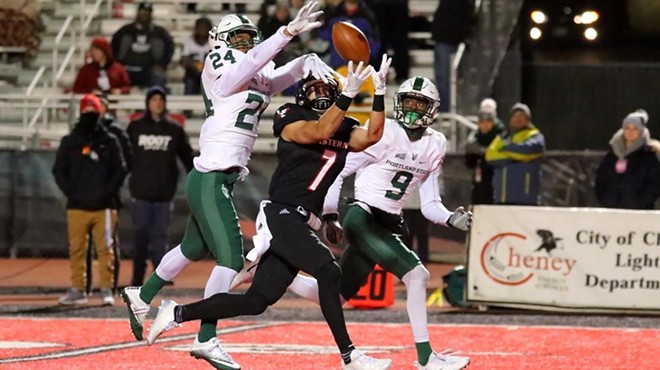 EWU Athletics
Nic Sblendorio ended his Eastern Washington career with a bang, catching nine of Gage Gubrud's passes for 273 yards, including touchdowns of 60 and 74 yards, Saturday in Cheney as the Eagles soared past Portland State 59-33.
EASTERN"S SEASON ENDS SHORT OF PLAYOFFS

Eastern Washington fans head to be feeling good Saturday night: the Eagles had pounded Portland State 59-33 at Roos Field, ending a regular season that fell short of lofty expectations on a high note and leaving the door open to a trip to the 24-team Football Championship Subdivision playoffs and the chance to pursue the school's second FCS title.

A few hours later, reality hit home as the FCS snubbed Eastern, which had hoped to receive one of 14 at-large berths. Only three teams from the Big Sky Conference, perceived to have had a down year, made the field — champion Southern Utah (9-2, 6-1), which beat Eastern 46-28 a month ago; runner-up Weber State (9-2, 7-1), a 28-20 winner last week in Cheney; and Northern Arizona, like the Eagles 7-4 overall and 6-2 in Big Sky play; the Lumberjacks did not play Eastern this season. It was only the second time in the past six years that EWU, which advanced to the semifinals last year, failed to qualify for the FCS playoffs.

There was nothing wrong with the Eagles' performance against the Vikings — Gage Gubrud rebounded strongly from a one-game suspension, completing 17 of 32 passes for 445 yards and four touchdowns and running for 67 more yards. Senior wide receiver Nic Sblendorio caught nine of Gubrud's passes for a career-high 273 yards — 2 shy of the Eastern record of 275 set by Cooper Kupp, now with the NFL's Los Angeles Rams, at Northern Colorado in 2015 — including touchdowns of 60 and 74 yards. Running back Antoine Custer ended his sophomore year in style with a career-high 177 yards and touchdowns of 6, 27 and 28 yards.

Eastern, which finished 7-4, 6-2 in conference play, rolled up 728 yards of total offense against the Vikings, the third-highest total in school history and 15 short of the record of 743, set at Idaho State in 2013. 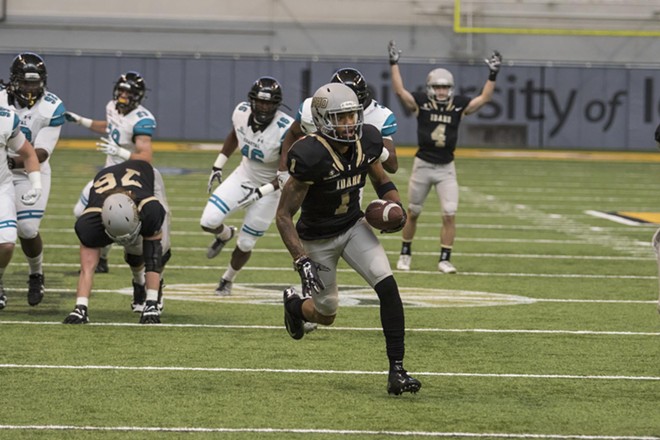 U of I Athletics
Alfonso Onunwor's 18-yard touchdown catch was the lone bright spot in the Vandals' 13-7 loss to Coastal Carolina.
VANDALS COME UP SHORT IN HOME FINALE

In the program's 125 seasons, Idaho has never played in bowl games in consecutive years. That streak continues as the Vandals dropped their final home game Saturday at the Kibbie Dome, falling 13-7 to a Coastal Carolina team, playing its first season in the Sun Belt Conference, that entered the game 1-9 overall and winless in six conference games.

Without injured starting quarterback Matt Linehan, a senior, Idaho generated 277 yards of total offense — 2 more than the Vandals' defense allowed the Chanticleers — managed only 14 first downs and found the end zone just once, on the game's opening drive. The loss left Idaho at 3-7 overall, 2-4 in the Sun Belt; the Vandals, who drop down to the FCS and the Big Sky next year, play their final two Division I games over the next two weeks, at New Mexico State next Saturday and Georgia State on Dec. 2.