Are Zags' struggles a trend, or just a blip as Gonzaga heads toward WCC play? 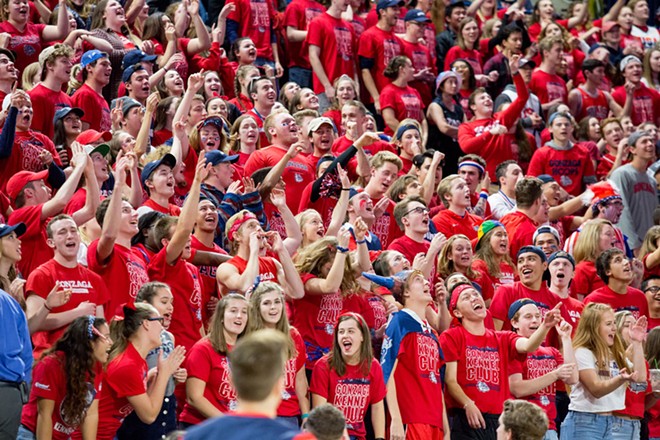 Libby Kamrowski
The Kennel kids have had reason for consternation in recent games.
The Zags were unbelievably good last season. Lately, though, they’ve looked underwhelming. Are the wheels falling off, or are fans under the spell of some serious recency bias?

If you see the glass as being half full, you’ll take a 2-1 record that includes a 30-point blowout and a narrow two-point loss to a good San Diego State team inside one of college basketball’s toughest road venues. But after the Zags’ most recent three games, many fans are seeing the glass as half empty. Their focus is on how the Zags played three sloppy games in a row, all against inferior competition, and needed overtime at home to survive against a bad North Dakota team.

Both viewpoints are accurate. A 72-70 loss at Viejas Arena, against an Aztecs team likely to make the NCAA Tournament, isn’t going to hurt the Zags much on Selection Sunday. And while the play was sloppy, Gonzaga was in it until the end. But then again, they lost when they should’ve won. And North Dakota had no business hanging with the Zags, yet the Fighting Hawks nearly pulled off an upset that would’ve been highly detrimental to Gonzaga’s NCAA Tournament resume.

So, what can we make of all this? Where do the Zags stand at the end of the non-conference portion of the season? It’s too soon to panic, but past time to throw away any rose-colored glasses. Maybe the best thing to do is take a look back at history.

Last season Gonzaga navigated non-conference play with a 12-0 record. This year’s Zags are clearly not as good as last year’s. Nobody expected they would be. So what’s the problem?

Gonzaga has made 19 consecutive NCAA Tournament appearances, and in eight of those seasons the Zags have entered West Coast Conference play with more than three losses. In six of those eight seasons they’ve won at least one NCAA Tournament game. Three of those seasons came to and end in the Sweet 16. Back in 1999, when the Zags dropped four games before conference play, they advanced to the Elite Eight.

But it’s worth pointing out that it’s been a while since the Zags have lost more than three games at this point in a season. You have to go back to the 2011 season, when Gonzaga held a 10-5 record at the start of WCC play.

To find the team that perhaps most resembles this year’s squad you only need to look back a couple of years.

At the start of the 2015-16 season Gonzaga was ranked No. 9 in the AP poll. By the start of WCC play, just seven weeks later, the Zags had taken on three losses and fell all the way out of the Top 25.

Przemek Karnowski, who combined with Domantas Sabonis and Kyle Witljer to form the best frontcourt in all of college basketball, suffered a season-ending injury just four games into the year. Suddenly without their center, the Zags had to adapt on the fly. Gonzaga’s guards were thrust into a greater role, and questions about the quality of their play were raised daily.

Hey, that Karnowski guy left campus after last season. And two of those guards, Josh Perkins and Silas Melson, are still on the team and running the offense. Sounds familiar, doesn’t it?

Perkins had his worst game of the season against San Diego State. The junior made just one shot, scored five points, committed seven turnovers and fouled out of the game.

Turnovers have been an issue for the Zags all season long, but especially of late. It’s easy to pin it on the point guard, especially since we’ve done it before. But, as was the case two years ago, when the Zags entered conference play with three losses, it wasn’t the guards’ fault. They were just the scapegoat.

Here we are again, watching the Zags take three losses into the WCC. Let’s see if history repeats itself. Because that team two years ago made the Sweet 16.