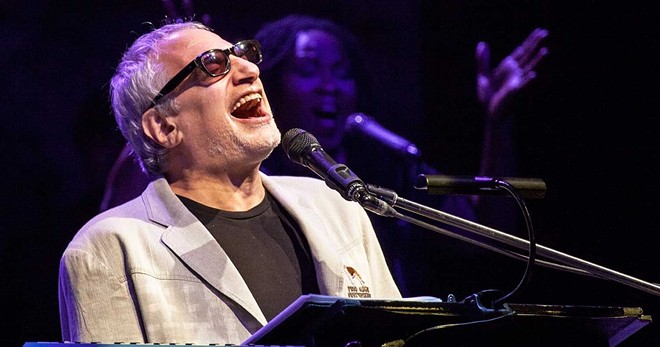 Donald Fagen of Steely Dan
Steely Dan and the Doobie Brothers are embarking on a co-headlining tour this summer, and one of their stops will be Spokane. The classic rock icons will play the Arena on June 7, one of 37 shows they'll perform during their Summer of Living Dangerously Tour.

It might seem like an odd pairing at first, but both bands have had remarkably long shelf lives and have seamlessly changed styles and musical identities over the years.

The Doobies started life as a California blues-rock outfit in 1970, producing radio staples like "Listen to the Music," "Jesus Is Just Alright," "Long Train Runnin'" and the No. 1 hit "Black Water." They then pivoted into pop with new frontman Michael McDonald, knocking out Top 10 singles like "Takin' It to the Streets," "Real Love" and "What a Fool Believes" into the early '80s.

The current Doobies lineup includes two founding members — guitarist, vocalist and songwriter Tom Johnston (who left the band in the mid-'70s following health issues) and guitarist Patrick Simmons — and multi-instrumentalist John McFee, who has played with the band off and on since the late '70s.

Steely Dan, meanwhile, has been back in the headlines following the September death of co-founding member and songwriter Walter Becker. Donald Fagen, Becker's longtime musical partner, continues to perform under the Steely Dan moniker, which has resulted in a legal battle with the Becker estate.

Fagen and Becker's strange blend of jazz, prog rock and pop made them unlikely stars, with their great 1972 debut album Can't Buy a Thrill producing the hit singles "Reelin' in the Years" and "Do It Again." Following a string of more experimental albums that included 1974's Pretzel Logic and 1977's Aja, the duo went on a long hiatus, reuniting in 1993 and continuing to record and tour until Becker's recent death.

ENTRÉE: A round-up of noteworthy culinary and libation events this January