Julie Gautier-Downes photo
Artist Keenan Bennett designs public restrooms like these, a way to try to spark...
Let's be clear: the design team in charge of the Riverfront Park redevelopment isn't actually considering any dramatically redesigned bathrooms at Riverfront Park by, say, tearing down the walls, having the toilets facing each other, or putting all the toilets on a carousel.

Instead, the Philadelphia-based artist-in-residence Laboratory is using models of radical open-bathroom designs, including one based on Riverfront Park’s topography, to spark provocative conversations.

He wants to explore how restrooms, once a haven for spontaneous encounters between gay men, could, with the right design, again become boundary-breaking social spaces. And he's doing that through an interactive art installation that opens on Tuesday, Jan. 30, from 5-8 pm at the Richmond Art Collective. 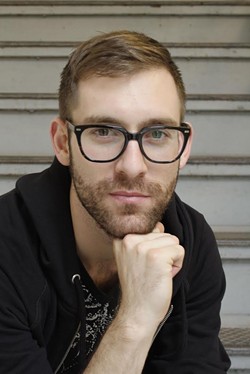 Doah E. Lee photo
Artist Keenan Bennett
Bennett identifies as genderqueer — he doesn't feel he's 100 percent male or 100 percent female — and he's currently in a same-sex relationship. Looking back in history, he's fascinated by the way that bathrooms in the '50s, '60s, and '70s became spaces for people to shed boundaries and societal strictures.

"In the U.S. these public restrooms served as sites for spontaneous romantic encounters," Bennett says. "These sexual networks then led to a political mobilization that helped lead to the success of the lesbian and gay liberation movement."

The idea of tearing down walls was almost literal, Bennett suggests.

"Public restrooms that queer communities were using were falling into disrepair," he says. "These breakage points, the wearing down of the architecture, opened up the [bathroom] as a social-political space."

It wasn't always bathrooms, of course. In Spokane, post-Expo 74, People's Park became known as a nude beach and a spot for gay encounters.

"It has a fantastic history," Bennett says. "I met people who knew more about the park —It’s really fantastic."

The days of bathroom as a hook-up space may be mostly over,  Bennett says. (Although former Idaho Sen. Larry Craig provides a relatively modern exception.)

Some of that may have to do with more tolerance for queer relationships, he suggests, and the ease of apps like Grindr. But he also says that the destruction of these sort of spots was sometimes an intentional result of bigotry.

"The AIDS crisis led to national homophobia that led to the closure of these public meeting spaces. It was this opportunistic response that has stripped away these spaces," Bennett says. "It makes this project feel more urgent to me."

Today, he says, technology has alienated us, driving an unfulfilled longing for human closeness.

So what is the project exactly? Well, it's an art installation at first, involving four architectural models of different bathroom designs. One bathroom design just puts a bunch of toilets in a pit facing each other. Another puts a few alien-looking trapezoidal toilets on top of a sandbox. And the third? That's the one inspired by Riverfront Park, that puts toilets around a Carousel. Yeah, just like the Looff.

The fourth is a large interactive piece, where forum attendees will be able to experiment with adding or subtracting or placing elements of the bathroom in interesting ways.

"You know, there's only so much that can be predicted about how the actual event is going to unfold," Bennett says. He plans to send some of the results of the event to the Spokane parks and recreation department.

While the event description says "Bennett has been in conversation with the City of Spokane," Bennett acknowledges that the conversation has been "somewhat one-sided."

And as much as this exhibit is a sort of artsy high-concept philosophical thing — you know, a provocative rumination upon design, boundaries and queer history — there is a personal level to it for Bennett as well.

"My first same-sex kiss happened in a restroom. And then my second and the third," Bennett says. "When I was really young the restroom became this space where I could be romantic with someone who I couldn’t take home necessarily."

It had happened, he says, back when he was in high school.

"The bathroom in my own life has served as this romantic social space," Bennett says. "Our politics couldn’t be more different, but in those years those politics are aligned in a way. We had this shared voice that was made possible, through the bathroom."

Spokane schools find soap in milk, twins might not both be US citizens, morning headlines