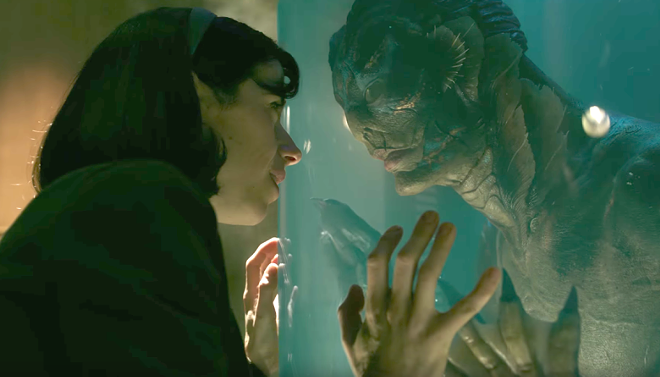 The Shape of Water
The question I've been asked most in the last couple months: "When is The Shape of Water finally going to play in Spokane?" Well, it'll finally be here this week, and with a whopping 13 Oscar nominations, the most of any other film this year, to its name.

Other than that, here's what you can look forward to in movie theaters this week.

HOSTILES (2 stars)
A racist military man (Christian Bale) is forced to transport a dying Cheyenne chief (Wes Studi) to his homeland in the 1890s. Scott Cooper’s brutal tale of frontier justice is, MaryAnn Johanson says, unfortunately far more concerned with the redemption of the white man than the Native American experience. Rated R.

MAZE RUNNER: THE DEATH CURE
Yes, they’re still making Maze Runner movies, and in this third and final installment, our generic post-apocalyptic hero and his friends must escape yet another trap-filled labyrinth. Or something. Rated PG-13.

PADMAAVAT
This Bollywood epic dramatizing the legend of a 14th-century Indian queen has inspired plenty of controversy in its native country, with its cast and crew receiving death threats over its supposed historical inaccuracies. It’s also one of the most expensive Indian films ever made. Not rated.

THE SHAPE OF WATER (4 stars)
With apologies to Pan’s Labyrinth, this is Guillermo del Toro’s finest film to date, a grisly adult fairy tale about a mute cleaning woman’s plans to free a captive amphibious creature from the government facility where she works. Weird, gory, eye-popping, disarmingly sweet and featuring a masterful star turn from Sally Hawkins. Seth Sommerfeld's rave review runs next week. Rated R.

PADDINGTON 2 (3 ½ stars)
Another lovely adaptation of Michael Bond’s classic children’s books, with the raincoat-wearing, marmalade-loving bear (voiced by Ben Whishaw) getting framed for theft and wrongly tossed into prison. It’s funnier and more visually inventive than its predecessor, and Hugh Grant does some of his best work in scenery-chewing villain mode. Rated PG.

PHANTOM THREAD (4 stars)
Writer-director Paul Thomas Anderson explores the world of 1950s fashion, with Daniel Day-Lewis in his (supposedly) final screen role as a high-end dress designer whose relationship with a much younger woman (Vicky Krieps) becomes fraught. Not exactly what you think it’s going to be, a sly dark comedy sewn inside a stunningly beautiful costume drama. Rated R.

A woman claims she was sexually harassed by a Stevens County employee, and a second one tried to cover it up