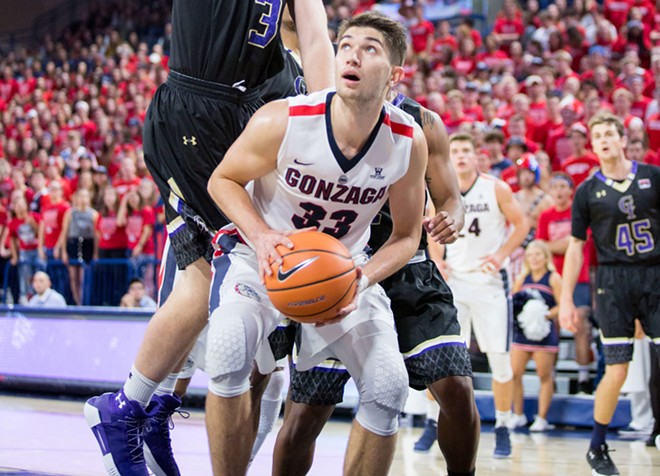 Libby Kamrowski
Killian Tillie and his fellow "bigs" are vital to the Zags success this season.
It used to be that Gonzaga was known as the school of guards: Stockton, Hall, Santangelo, Dickau, Stepp, Raivio, Pargo, Pangos and Bell.

But it appears the front court is where the Zags' bread gets buttered as of late. And that narrative stayed true in the last week's matchups versus the Portland Pilots and San Francisco Dons. One night a barn burner and the other a nail biter, but ultimately both decided by the advantages Gonzaga had in the paint.

Sophomore Killian Tillie had a helluva week, dominating the glass with 43 points and 15 rebounds over the two games. The Frenchman showcased the aerial and ambidextrous skills that has put him on scouts' radars.

It's tough sometimes for players to assert themselves and find a groove in an offense and rotation as diverse and packed as Gonzaga's. How do you hunt your play when you're weaving through minutes and possessions with up to 5 other guys? Perhaps the emergence of Rui Hachimura could be part of Tillie's quiet nights offensively, but credit to the big for consistently racking up rebounds and effort plays.

And the nightly carousel of success is due to Coach Mark Few and the players finding the best way to attack opponents' mismatches when they're presented. The Pilots didn't have an answer for Tillie, just like the Dons couldn't figure out a way to stop the bleeding against Tillie, Hachimura and Johnathan Williams.

The three-headed attack shot 64 percent on the night and accounted for 17 of the team's 30 rebounds. The inside onslaught served as an elixir for a frigid night from outside, where the team only made seven of their 30 attempts.

This week also served as the re-emergence of freshman Corey Kispert. After a couple quiet nights against Saint Mary's and Santa Clara—and dealing with the ups and downs of not only collegiate basketball but an ankle injury to boot—Kispert showcased the talent that turned heads to start the season.

He has a knack for attacking the basket with a quick first move that allows for his mid and perimeter game to come together. Thursday night's game against Portland is where Kispert broke out with an efficient 23 points in 23 minutes.

It's becoming clear that while the Zags' outside shooting should be taken seriously by opponents, it may not be the weapon that early games in the season suggested. The Zags are hovering around 36 percent from three, the lowest average in the last 10 seasons for the program.

IN THE PIPELINE
In terms of prospect news, Saturday's game served as an unofficial visit for 2020 prospect Dominick Harris, who committed the following day. It's an early win for the Zags, who beat out recruitment from Georgetown, Maryland, UCLA, Stanford and Cal. Harris is considered a four-star recruit, with plenty of room to develop in his last two years in high school.

Harris is 6'4 currently and has the body of someone not done growing. His athleticism, shooting skills and hybrid guard ability is absolutely further proof of what national recognition and tournament success can do for a program.