Break it down: Gonzaga lands first round close to home, but an early start time 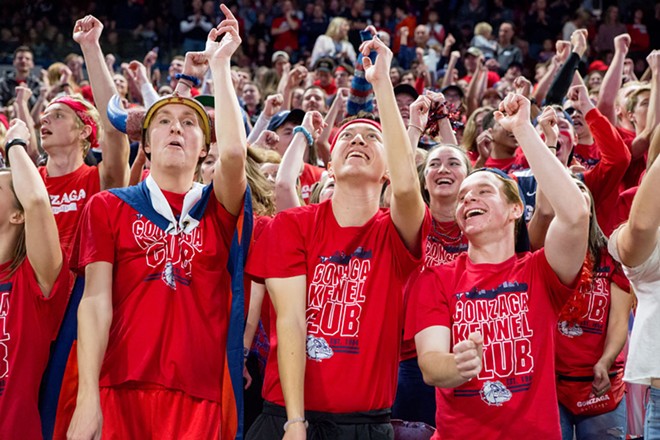 Libby Kamrowski photo
Expect a large contingent of Gonzaga's Kennel Club to make the trip to Boise for Thursday's 10:30 am game against UNC Greensboro.

It's hard to go back to feeling disrespected by the Selection Committee following the year of a national title game and a No. 1 seed, but here we are again, Zag fans.

Gonzaga saw their name called as the No. 4 seed in the West Region on Sunday, one of the bigger under-seedings by the committee for the entire bracket. Perhaps solace can be found in who the Zags find themselves surrounded by. The No. 1-seeded Xavier Musketeers are perhaps the weakest team to be found on any of the top lines.

Retribution could come if the Zags can weave their way to the West's championship and meet up with North Carolina. But first, they'll need to dispose of teams looking for their own payback against the Zags, as well as a sneaky-good 13 seed in the UNC Greensboro Spartans.

The Spartans are tough guarding the basket, boasting the sixth-best scoring defense in all of college basketball. The matchup will likely remind many of the Zag faithful of some of the more frustrating minutes of the games against San Diego this season. UNC Greensboro is a great man-switching defense that can also frustrate teams with the press (cue up the nightmares from that Texas game in the PK80, why don't we?).

They're also a decent three-point shooting team — a weakness of the Zags — with their leading scorer Francis Alonso averaging more than three makes a game. But the Spartans are also horrible at avoiding fouls, with nearly a quarter of their opponents' points coming from free throws. This could mean a lot of Rui Hachimura action in the round of 64.

If successful in the egregiously early 10:30 am game on Thursday, the Zags would face the winner of 5-seed Ohio State and 12-seed South Dakota State. You might recall that Gonzaga trounced Ohio State earlier in the season, but this is hardly the same Buckeye team. And the Jackrabbits from South Dakota hardly forget their loss to the Zags in last year's tournament.

Overall, the committee seems to have done the Zags a favor in having the frustrating defensive team be in the first matchup and the two previously-faced teams being the 48-hour follow-up.

And the Zags are the sexy pick in media circles following the bracket reveal. Publications left and right are bullish while playfully being sheepish with their "can a national championship team really be a dark horse!?" boilerplate ledes.

ESPN's Seth Greenberg and Jay Williams are atoning for last year's poor tea leaves reading by declaring them the likely West representatives. FiveThirtyEight is giving the Zags a 24 percent chance to return to the Final Four, following UNC's 25 percent chance and ahead of Xavier's 18 percent chance.

But we'd be remiss to not also bring up the fact that the Saint Mary's Gaels did not get their tickets punched to the dance. The 20th-ranked team in the country, with a 28-5 record, were rebuked on the simple principle that they didn't play anybody. Only four of those 28 wins were against non-bottom-half quadrant teams.

And CBS Sports' Gary Parrish revealed later on Sunday that the Gaels turned down home-and-home offers from Creighton and Rhode Island, two mid-majors that did make the tournament. If there was ever a sign that the Zags should jump to the Mountain West if the opportunity made itself available, it's being the only bid in a conference you weren't even projected to win.

THIS WEEK: Ham on Regal, Lilac City Live! and St. Patrick's Day parade all on tap