And then they came by the dozens, holding signs saying "#enough" and "Thoughts & Prayers Are Not !!!"

And then hundreds spilled out, covering the stairs to the front entrance and spilling onto the street.

"This is a lot bigger than I expected it to be," says Fiona Whitver, the Lewis and Clark student who organized the walkout at the school.

They held their signs high. They chanted — "Peace Not Guns" and "We Want Change."

A person driving by "You're all doing the right thing!"

Teachers and school administrators and parents stood by, supporting the students. Other adults held their own signs. The kids faced news cameras and the media, cheering loudly, the roar of hundreds of high school students all demanding change.

And after 17 minutes, one minute for each victim of the Parkland shooting, they walked back school for class.

It was just one of many schools participating in the national walkout. Locally, several other schools participated, including Shadle, Mead, East Valley, Gonzaga Prep, even Sacajawea Middle School and Wilson Elementary School. 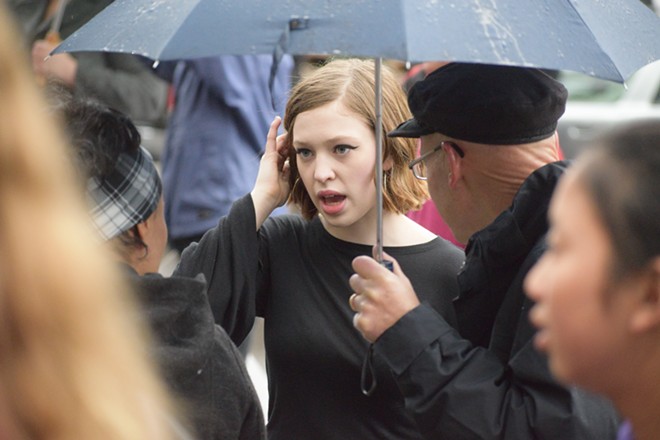 Whitver says she decided to get the word out about the walkout at LC when she learned a couple weeks ago about the national event. She used social media to let other students know about it, expecting maybe 50 students. There ended up being a couple hundred.

"I almost started crying when I saw everyone pouring out, you couldn't see the back of the line," she says.

She says some students questioned her about the walkout before it happened, thinking she wants to abolish the Second Amendment. But she says they just want harsher rules so that it's not so easy for people with mental health issues to buy a gun and walk into a school.

"We want safer schools," she says.

"This is my first year of high school. I've already felt a lot of the stress that comes with being in high school and one of those stresses should not be, 'Am I going to get shot today?'" 15-year-old Larke Schaff says.

Mary Naber, a retired teacher, joined the students with a sign reading "Power to Our Youth."

"I'm hoping to support them taking action for their safety," Naber says.

School districts all over treated the walkout differently. In Spokane Public Schools, the district treated students who walked out as an absence. Shawn Jordan, the district's director of secondary programs, watched the walkout from the front steps.

"Our main interest here today was ensuring the safety of students," Jordan says.

Many of the students participating in the walkout weren't worried about a truancy on their record.

"I'm willing to get a truancy because a student across the country sacrificed their life," Schaff says, referring to the Parkland victims.