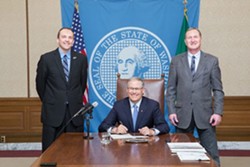 Gov. Jay Inslee signed a bill today that will expand the current three-member Spokane County Commission to five, despite objections from current members.

The bill will increase the Spokane County Board of Commissioners to five by the 2022 election, and it will mean members are elected only by voters in their district instead of from all around the county. It saw bipartisan support from local legislators, including Democratic Rep. Marcus Riccelli, who crafted the bill.

But current commissioners Al French, Josh Kerns and Mary Kuney opposed the bill. Earlier this month, each signed a letter that was sent to Gov. Inslee asking him to veto the bill. They argued that it went against the interests of Spokane voters, who rejected a proposal in 2015 to increase the number of county commissioners from three to five. And they argued it would be costly to implement.

"We would urge you to veto [the bill] and in so doing recognize the voters' decision in 3, 2015, general election," the letter states.

All three commissioners are Republicans. But they were mostly alone in their opposition to the bill — even local Republican legislators supported Inslee's decision. Their support, however, stemmed from the assertion that the Voting Rights Act, which is soon to be signed into law and aims to give minority groups better representation in local government, will likely lead to a lawsuit forcing the county to go to a five-commissioner entity anyway. Republican Rep. Jeff Holy, a co-sponsor of the bill, argues the bill will help sidestep a legal challenge.

"We brought this legislation forward in hopes of preempting the court from inserting itself in this process," Holy says in a statement. "This bill will allow for philosophical and political diversity, and is in the best interest of Spokane County."

In a phone call, Holy explains that he understands the concerns from the current county commissioners from a policy perspective, but he called that a "moot point" because of the Voting Rights Act.

"The rules of engagement have changed with the Voting Rights Act," Holy says.

"This was a great opportunity for us to reach across the aisle and help the county prevent an inevitable lawsuit," he says. "We don't want to get into a situation where the court is determining district boundaries, and the county is left footing hefty attorney fees."