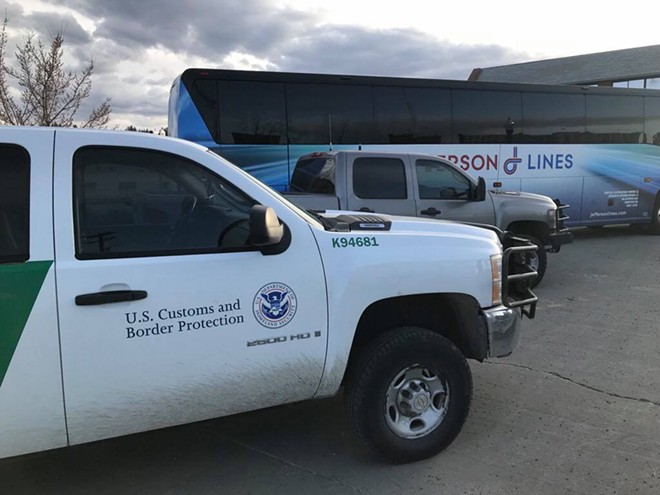 Photo courtesy of David Brookbank
A U.S. Customs and Border Protection truck parks outside the Intermodal Center on March 18, 2018.

Last week, the Inlander reported that the city's plans to open up a one-stop social services shop to address homelessness in the city's Intermodal Center had run into a major snag: The center also houses the Greyhound depot, which has, for many years, been a target for Border Patrol sweeps.

Worried that the Border Patrol activity would discourage vulnerable individuals from accessing the social services facility, City Council President Ben Stuckart, vowed to oppose the funding of the facility until his concerns about the Border Patrol sweeps could be addressed.

But when several City Council aides and city staffers met with Border Patrol on Friday to hear more about their operations, they learned that Border Patrol — not only doesn't plan to decrease its emphasis on Spokane — planned to actually expand its operations.

Today, a press release made that official: Border Patrol was reopening its station at 10710 N. Newport Hwy., just east of Whitworth University, where the  Spokane Sector Border Patrol Headquarters are currently located.

The station had been shuttered a decade ago in response to attrition from Border Patrol agents.

“We have seen a need for this station for some time now,” Chief Patrol Agent Henry Rolon stated in the press release. “Currently, I have to take Border Patrol agents and assets away from other stations along the border to complete the local mission in Spokane. The Spokane station will eliminate the need to deplete the number of agents patrolling the border and help in our continued efforts to support local, state and federal law enforcement partners in the area.”

In an email, U.S. Border Patrol operations Officer Bill Kingsford estimated that the office will be staffed with about 30 agents. They will be transferred from surrounding facilities. (New hires are going to the southern border.)

Local Latino activists like Mesa, however, have raised concerns that the sweeps at the Greyhound depot and elsewhere end up targeting individuals by race or according to their accents.

Nationally, the Border Patrol has denied such charges.

"It is the policy of U.S. Customs and Border Protection (CBP) to prohibit the consideration of race or ethnicity in law enforcement, investigation, and screening activities, in all but the most exceptional circumstances," the Border Patrol policy explains.

In many of the controversial cases on Amtrack and Greyhound buses, Border Patrol has asked to see everyone's identification, not just minority passengers. But there have been apparent exceptions.

In 2013, the Border Patrol settled with the American Civil Liberties Union of Washington and the Northwest Immigrant Rights Project, after the groups accused Border Patrol of racial profiling on the Olympic Peninsula. The settlement required agents to receive additional training trained on the Fourth Amendment principles that require "reasonable suspicion" for Border Patrol to pull over vehicles away from the border.

The concern from activists and councilmember isn't just the possible actions of Border Patrol — it's the perception. Activists like Mesa have encouraged Latino residents — both documented and undocumented — to avoid the Intermodal Center.

In an interview with the Inlander, Mauricio Velazquez, an international student from Mexico studying at Gonzaga recalls needing to take the Greyhound bus to travel to Seattle to renew his passport at the consulate.

He recalls two Border Patrol agents boarding the bus. One stood at the door, while the other agent went to the back and then worked his way forward, asking every passenger about their immigration status and paperwork.

Luckily, because Velazquez was traveling to renew his passport, he had his visa paperwork with him.

"[Even] knowing I had my paperwork with me, I was definitely nervous when I saw them," Valazquez says. "What are they going to ask me?"

Adam McDaniel, Stuckart's legislative aide, says the city did bring up the concerns about the impact on the proposed social services center in their meeting with Border Patrol.

"They made it clear they are not there to detain those who are coming for social services," says McDaniel. "They’re not going to just prop up outside an integrated social service center."

But the possibility of an increased Border Patrol presence still concerns Stuckart. His opposition to the social services center location has only hardened.

"Border Patrol said they’re going to open an office with new agents," Stuckart says. "It will only become more prevalent."

He brought up those concerns at yesterday's public safety meeting, during a heated conversation with Dawn Kinder, head of the city's Neighborhood and Business Services division.

"They're actually moving to a more aggressive stance," Stuckart said. "I don't see how we can consider even moving a step closer to the center... I just don't understand why we're not hitting a pause right now."

Kinder said the city is looking at at least five other locations to locate the integrated social services center.

"We're moving very actively to try to find an alternative location," she said. But she notes the city could lose out on federal funds that could be used to rehab the Intermodal Center for their pilot of the integrated social services center.

Stuckart isn't the only council member with concerns about Border Patrol.

"That just scares me, the thought of [locating the social services center at the] Intermodal," Councilwoman Karen Stratton said at the public safety meeting.

"We should abandon, for now, the Intermodal Center as one of the options," Stuckart said.  "There is no way, unless the Border Patrol says we will not stop going to the Intermodal, puts that in writing. ... I would rather get it right ... and move forward than have one person be detained because we set it up there. Because, to me, we are now culpable for that happening."

Spokane Sector patrols approximately 308 miles of border with Canada (an area covering from the Cascade Mountains to Glacier National Park in Montana). For years, agents have traditionally worked in Spokane because it is the largest city between Seattle and Minneapolis, Minnesota and is a major hub in the Pacific Northwest of the United States. Additionally, Interstate 90 and Highway 2 are major east/west routes that traverse through Spokane.

“We have seen a need for this station for some time now,” Chief Patrol Agent Henry Rolon stated. “Currently, I have to take Border Patrol Agents and assets away from other stations along the border to complete the local mission in Spokane. The Spokane Station will eliminate the need to deplete the number of agents patrolling the border and help in our continued efforts to support local, state, and federal law enforcement partners in the area.”


This story has been updated.