Should the left ally with Republicans in the fight against the alt-right? 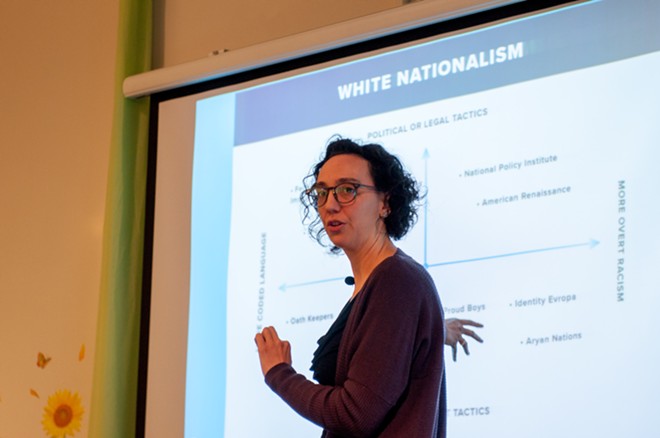 
For one lesson, she pointed to John Tanton, the founder of the modern organized anti-immigration movement. As time had gone on, Tanton's anti-immigration rhetoric had become increasingly racist, even supportive of eugenics.

"There was an organized effort to discredit him and push him out of the mainstream. When folks started going after him, other people said it was impossible. But what they did is really expose his beliefs and bring conservatives on board. Because he's working in Republican spaces," Schubiner said. "They built a coalition of folks who wanted to distance themselves from John Tanton and his influence. Once more conservative folks started going after John Tanton, other people felt they could voice their disagreement."

It all culminated in a New York Times article that resulted in Tanton being largely shunned from the movement.

It's a key lesson: If you want to stop the quest to become part of the mainstream, recruit the mainstream right to isolate them and shun them.

“His past statements, affiliations actions are deeply out-of-step with the values of the Republican Party,” the Spokane County GOP chair Cecily Wright wrote.

"I don’t have a relationship with him, but I know what he stands for. His actions and words do not reflect the values of the Republican party or Eastern Washington," Rep. Cathy McMorris Rodgers wrote in a statement. "White supremacy, racism, and bigotry are never acceptable and have no place in America or Eastern Washington."

That isn't the first time that McMorris Rodgers has condemned Allsup either.

But for some on the left, allying with the right to fight white supremacy comes with a concern: Are they giving Republicans cover to say that they’re not racist, obscuring what they see as racist Republican ideology?

Last week, Spokane Community Against Racism hosted a talk by Gonzaga lecturer Joan Braune titled "Countering the Alt-Right Threat to Spokane." Mariah McKay, former Inlander columnist and champion of various left-wing causes, reached out personally to some of her Republican friends — the sort she argues with on Facebook — and invited them to attend.

"I think it’s positive that local Republican party leaders do not see James Allsup as part of their ranks,” says McKay. “I would like to keep it that way.”

McKay argues that Republican leaders have an obligation to recognize that they have a responsibility to prevent the growth of extremist movements within their ranks. And the lecture last week wasn't about an opportunity for Republicans to grandstand, she said, it was an opportunity to ask questions.

"I wanted to make sure that they’ve had access to the information I’ve been steeped in," McKay says.

She also says she hoped that they'd ask themselves why the alt-right identifies closer to Republicans.

"Why does James Allsup think he can infiltrate Republicans?" McKay asks. "Why does he think they can get a toehold in the community? Perhaps by learning more about the history of these extremist groups, they can be more self-reflective."

McKay says the event was great.

"People, our Republican friends included, left the room feeling empowered," McKay says. "There is historical precedent for beating these people back."

And when Braune was asked about including Republican allies in the fight, McKay says, she responded that of course conservatives are a crucial part of stopping the spread of that kind of ideology.

Spokane County Democrats vice-chair Jac Archer was fine with accepting Republicans who want to join the movement opposing the alt-right, but wasn't raring to actively recruit them.

"When I see anti-racist movements, I go to them," Archer said. "I don’t have to be convinced. I don’t have to be cajoled."
Wright, the Spokane County GOP chair, meanwhile, says she's not really a fan of pushing back against white supremacy through large “ kind of get-togethers.”

“That, to me, is phony,” Wright says. She worries about giving the alt-right groups more attention. “It brings more attention to the people who want confirmation that we have racism.”

She resents the idea that she had to issue such a statement against Allsup. That, to be clear, is not because she's anything close to a fan of Allsup's. “I’d like to go punch the guy in the nose myself,” Wright jokes. But to her, the idea that Republicans don’t support white supremacy is so obvious that it shouldn’t even need to be said.
"The way I look at it is both parties absolutely abhor racism," says Wright.
She says she marched in civil right rallies back in the '60s and says the more people focus on racism, Wright argues, the more divided the country becomes.

Rallies can throw gasoline on the fire, she says.

"I don’t really want to honor the nutjobs with something like that," Wright says.

That's one of the big challenges in forming a bi-partisan alliance against racism. Democrats and Republicans can't always agree on what racism even is.

To generalize, on the right, racism is something evil that a person believes in their heart and mind. But on the left, the definition goes much further: Racism is about power dynamics, a toxic ideology embedded deep within societal structures.

Together, they co-founded the “Peaceful Communities Roundtable,” a group of community leaders from a variety of backgrounds aiming to combating racism and finding solutions. But for some on the left, it was an outrage.

"I remember people being pretty upset," McKay says, "For her to think that because she can shake hands with a black man and take a pretty picture that she's an ally of communities of color is very shallow."

McKay raises concerns that events like these can be more of a photo-op than productive, that it can mask the actual conversation that needs to happen.

"It’s easy to demonize one boogeyman and then turn around and pass policies that disproportionately impact [people], and not bat an eyelash about it," McKay says.

But others have been more supportive. In May, Rodney McAuley, a black pastor with Youth For Christ, told the Inlander that he'd attended the roundtables with McMorris Rodgers, and believed that the events have been genuinely influential.

"I have had occasions to be in different settings and personally observed a journey of compassion and heart-shifting in Cathy," McAuley says. "I can state that unequivocally."

Even if they don't see eye to eye, McAuley argues, they can build relationships and combat division together.

After the Unite the Right rally in Charlottesville — attended by Allsup — Trump gave an " unequivocal boost" to the white supremacist movement, according to the New York Times.

White supremacist figures like David Duke and Richard Spencer praised Trump's comments that there are "very fine people on both sides."

And for some on the left, the president who spouts textbook racist comments; who launched his campaign accusing Mexican illegal immigrants of being rapists and criminals; who uses words like "infested" to describe migrants; and who refers to immigrants from Africa as coming from "shithole countries," doesn't just give aid and comfort to white supremacy, he embodies it.

"It is often said that Trump has no real ideology, which is not true — his ideology is white supremacy, in all its truculent and sanctimonious power," writes Pulitzer Prize finalist Ta-Nehisi Coates.

And that complicates any alliances between the left and the right to combat racism: One side supports Trump. The other thinks he's the embodiment of racism.

After the Charlottesville rally, McMorris Rodgers repeated her opposition to white supremacy. But local Unitarian Universalist minister Todd Eklof condemned McMorris Rodgers for being "complicit" in racist violence for not taking a stronger stand against Trump.

In several occasions, McMorris Rodgers has called out Trump on his offensive statements.

But that hasn't, say, stopped McMorris Rodgers from being jeered at by left-wing hecklers at Martin Luther King Jr. events two years in a row.

Pastor Walter Kendricks, the black pastor of Spokane's Morning Star Baptist Church, hosted the "Countering the Alt-Right" event. He considers McMorris Rodgers a friend and has been a part of the Peaceful Communities Roundtables. He says he appreciates the times when she has criticized Trump's offensive words.

“Is it helpful that she condemns the statements? Yes,” Kendricks says. “The flipside to that: I think it was [black novelist] James Baldwin who said, ‘I can’t hear what you say because I see what you do.'"

In other words, Kendricks feels McMorris Rodgers still votes in a way that is not in the interest of the everyday working people. He wants a stronger stand, not just with her words, but with her actions.

Kendricks says the Peaceful Communities Roundtables have not been held since the Inlander reported on the long history of domestic violence allegations against Tyler, the Roundtable’s co-founder.

He says he plans on reach out to McMorris Rodgers this week to restart the meetings.

“We have to reach out to the people of good will from every political party from left to right,” Kendricks says.

3-year-old dies from Boise stabbing, Trump tells schools not to consider race in admissions and other headlines

Protester climbs the Statue of Liberty, local teacher wants to be an American Ninja and other morning headlines