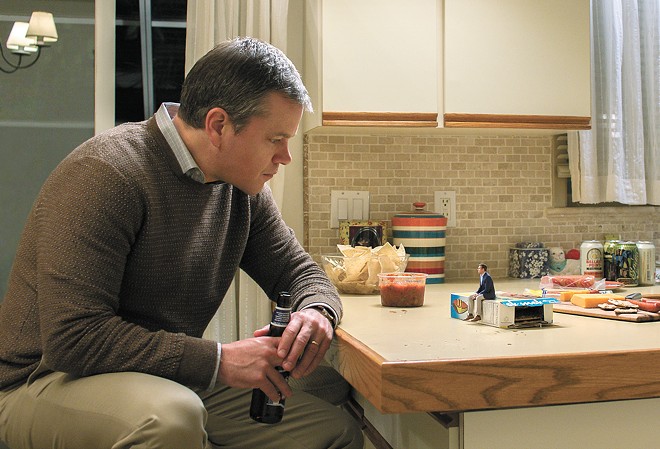 The not-so-incredible shrinking man: Matt Damon is an everyday guy who contemplates living just inches off the ground in Alexander Payne's Downsizing.

Among the many curious surprises offered by Downsizing,

a social satire about mankind's efforts to reduce the entire population down to an average height of five inches, is the fact that Alexander Payne made it. Co-writing with regular collaborator Jim Taylor, Payne (Election, The Descendants) is no stranger to tongue-in-cheek commentary, but Downsizing has the loopy, unpredictable, melancholy plot line of something by Charlie Kaufman (Adaptation, Anomalisa). To put it bluntly, I had no idea Payne was this imaginative.

The premise is that Norwegian scientists have perfected a means of shrinking people with a single injection into the bloodstream. Whatever other purposes such technology might have, the aim here is to relieve overpopulation and save Earth: Tiny people not only take up less space, they also eat, use and waste a lot less food and other resources than their full-sized counterparts. After a handful of brave scientists reduce themselves and live that way for several years, occupying specially made small houses and such, the procedure is opened up to the general public.

The selling point for average people — such as Omaha occupational therapist Paul Safranek (Matt Damon) and his wife Audrey (Kristen Wiig) — is that being small is also drastically less expensive. A palatial home that would cost hundreds of thousands of dollars in the big world can be made from a few dollars' worth of lumber. A fancy steak dinner is significantly cheaper when you only need to eat a quarter of an ounce to feel stuffed. People like the Safraneks, barely making ends meet now, can live like tiny kings.

Focusing primarily on Paul Safranek, the film walks us through the shrinking process and into the small community he's chosen to live in, called Leisure Land. Now, no one says smalls have to live apart from bigs, and they do interact sometimes. (Yes, there's a scene where a tiny person has to sign a giant document with a giant pen, and yes, this is funny.) But for logistical purposes, the big and small worlds are mostly separate, and this allows for one of the few plot developments that you could have seen coming: This new society has many of the same problems as the old one. Human nature doesn't change just because the humans are smaller.

Among the people Paul meets in Leisure Land are Dusan (Christoph Waltz), an unnecessarily weird neighbor from Eastern Europe, and Ngoc Lan (Hong Chau), a Vietnamese dissident and devout Christian who escaped to America. It is because of these two that the story takes its fascinating twists and turns — not in a meandering way, but in the manner of a whimsical picaresque about a man going from one adventure to the next. There are a thousand directions you could go with the basic premise, giving you plenty to think about as you ponder the path Payne chose.

Damon is fine as a well-intentioned everyman muddling his way through life, but Paul is often merely an observer to the miniature world around him. His choices and character aren't as interesting as the film's real standout, Hong Chau (recently seen on HBO's Big Little Lies) as Ngoc. She's the one who opens Paul's eyes to the poverty and inequality of the small world, giving him a renewed sense of purpose (albeit one with a "white savior" thread to it) and opening the door for Chau's layered performance of a surprisingly complex character.

Still, despite Chau and despite the fantastical premise, Downsizing belongs to the same category as most Alexander Payne movies: sharp-edged comedies about the problems of comfortable white people. Those who were put off by this element in, say, The Descendants or Sideways won't find Downsizing any more palatable, and may be frustrated by the more complicated characters being pushed off to the periphery. I found the whole thing so stimulating as a thought experiment that I'd happily watch another film set in the same world, exploring more of the thematic possibilities. ♦

Downsizing is not showing in any theaters in the area.