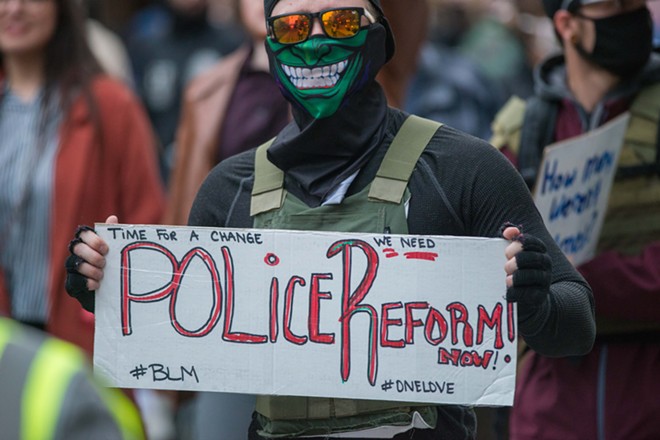 Sometimes, timing is everything.

Spokane's Police Guild has gone over three years without a new contract. Since 2017, the city and the Guild have been locked in behind-the-scenes negotiations over pay scales, benefits, and police oversight. Even after an ordinance passed this November requiring union negotiations to be held in public, neither side was willing to say what proposals were being offered behind closed doors.

The public could only wait for an official draft of a proposal to be released.

On Friday, they got one. But the proposed new contract, argues City Council President Breean Beggs, ultimately represents a step backward for police oversight, one that he believes could create a chilling effect on the police ombudsman in charge of ensuring police accountability.


One proposed change, he says, would allow the Guild to try to remove a police ombudsman or a member of the volunteer ombudsman commission for "exceeding their authority."

"You might as well not have an ombudsman if you have that provision in there," Beggs says. "I can't vote for the contract with that."


City Administrator Wes Crago argues that the ombudsman has been "strengthened" overall.

But on Monday, Spokane's current police ombudsman, Bart Logue, sent an email to Crago, the City Council and the mayor ringing many of the same alarm bells as Beggs, warning that "this potential contract greatly infringes upon the independence" of his office.

That loss, he writes, would be devastating.


"In this job, I have faced numerous accusations, disrespect, and outright hostility from the police guild. I have faced countless obstacles from the police department and city as I have worked to fulfill the requirements of the office," he writes. "What has become crystal clear to me over nearly four and a half years, is that there would be NO chance I would still be standing in this role without independence from the city."

The City Council plans to vote on the contract next week. It would have been a tough sell for the council to approve at any time.

But right now? Night after night, Spokane's streets are packed with protesters decrying police brutality and racism. Similar protests have hit all 50 states. We've seen calls to defund the police, abolish the police — or at least bust their unions. The city of Minneapolis has even announced a plan to dismantle and rebuild the police department entirely.

"It has become very clear that in communities nationwide, trust of the police continues to erode," Logue writes. "The protests and outrage should impress upon us the seriousness of their concerns; we should not rest until there is not another case of injustice, maltreatment, or abuse of people at the hands of the police."

And what does it say, Logue says, if Spokane can't get real reform done now, with all this national demand for change?


"If not now," he writes in a refrain he repeats multiple times throughout the letter, "then when?" 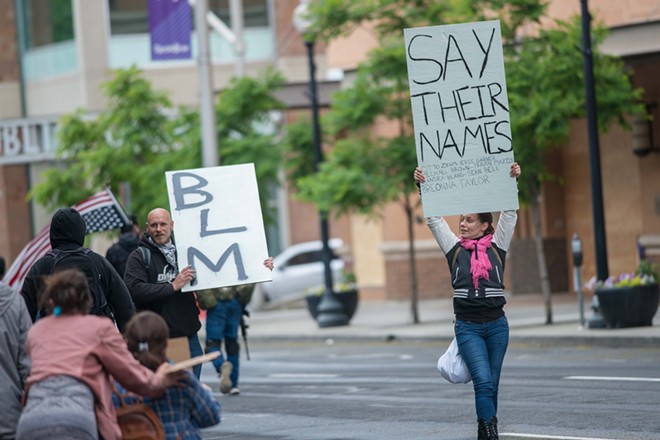 Daniel Walters photo
A Spokane protester includes "Otto Zehm," a Spokane man who died after being beaten and hogtied by police in 2017, on the list of names of victims of police violence.
A protester on Sunday marches through downtown Spokane, holding aloft a posterboard sign almost as big as she is, inscribed with the familiar slogan: "SAY THEIR NAMES."

And underneath there's a familiar list of victims killed by police, including New York City's Eric Garner and Sean Bell, Louisville, Kentucky's Breonna Taylor, and Ferguson, Missouri's Michael Brown. But the first name the protester wrote — "Otto Zehm" — was the death that forever altered policing in Spokane.


In 2006, Zehm, a mentally disabled janitor, walked into a Spokane Zip Trip to get a Snickers, only to be tased, beaten and hogtied by Spokane Police officers. He died, and police officers lied about it. The officer who struck Zehm 13 times with his signature ironwood baton was sent to prison — though not before 50 officers in the courtroom, including future Police Chief Craig Meidl, stood up and saluted the convicted officer.


Long before he was council president, Beggs sued the city on behalf of Zehm's family. He was a major force in pushing the city to empower an independent police ombudsman to scrutinize the Spokane police department's actions.

Almost immediately, however, the ombudsman's office was defanged by a state arbitrator, who declared a significant portion of ombudsman's powers to be an "unfair labor practice."

Even after 70 percent of Spokane voters supported an ordinance in February of 2013 to etch the ombudsman's right to conduct independent investigations into city law, that power has remained at the mercy of the Police Guild's contract. 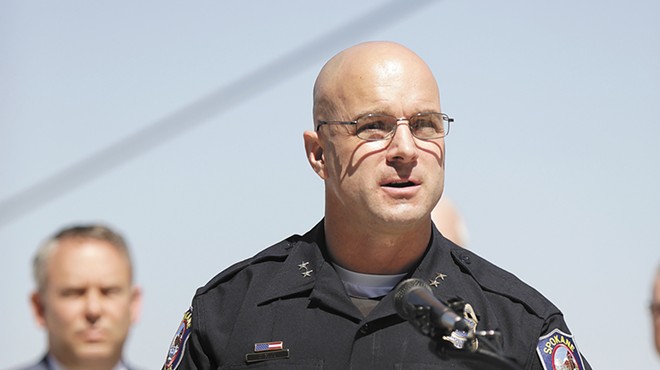 Even now, Logue says, he still doesn't have the full investigative authority. And the new contract wouldn't fix that.


"Right now, the Guild’s stance is that we can only investigate things that the police department won’t," Logue says. "That’s them dictating what we can look at."


Sure, Beggs and Logue say that the proposed new contract contains some improvements. The ombudsman would be guaranteed more access to evidence. He'd be able to investigate minor complaints. Most of his powers are expanded to his assistants in the ombudsman office as well.

But all that modest progress, Beggs and Logue say, is washed away by the proposal to give the Guild the power to try to get the ombudsman — or a member of the ombudsman's commission overseeing him — fired for either leaking confidential information or "exceeding their authority." The union would be able to file a grievance and send the issue to arbitration to enforce the agreement.

"If the overseen can fire the overseer, that’s a problem," Logue tells the Inlander. "That’s an absolute problem. In no way, shape, or form should that be part of that contract at all."


The proposed contract doesn't outline what exactly "exceeding their authority" means. But Beggs is worried that simply the threat of losing their job could cause the ombudsman to play it safe — and not challenge the police department when it should be challenged.

Similarly, the proposed contract requires all appointed members of the ombudsman commission to have a reputation for "even-handedness," and allows the union to file a grievance to try to prevent candidates who they feel don't from joining the commission.


"To be honest, I’m appalled," says Jenny Rose, chair of the ombudsman commission. "Why are you doing this right now when the country is like this?"

Rose isn't anti-union. She says her dad used to be president of Spokane's police union back in the 1980s. She herself served as the president of the Spokane Education Association for eight years. But she still feels like the Spokane Police Guild is going too far.

The Spokane Police Guild did not respond to a request from comment Friday.

Daniel Walters photo
A black child watches in the background as Spokane police officers ride past in downtown Spokane on Sunday.


During last year's campaign, Mayor Nadine Woodward repeatedly touted the Police Guild's endorsement of her, appearing beside them in campaign ads and going out doorbelling with its members.

She proposed placing a term limit on the ombudsman and lamented that the conflict over the ombudsman's powers may have been hampering negotiations over the police contract.

The closed-door union negotiations mean that we don't know precisely how Woodward's philosophy has influenced the proposed contract.


"Generally speaking, as she came into office, she had it a priority to get the contract done," says city spokesman Brian Coddington. "The Police Guild has operated for three years without it. It was a priority for her to make sure that for both parties of the contract there was resolution and clarity moving forward."

Coddington says that the city's attorneys concluded that the contract didn't clash with the city's charter and that the provision allowing the Guild to try to remove the ombudsman isn't all that unusual.


"There are grievance processes that exist in multiple areas of city government and operation, and that would be no different," he says.

Coddington reels off a lengthy list of ways that the city has reformed its police department since the death of Otto Zehm, including adding body cameras, reducing use-of-force incidents, and implementing crisis-intervention training.

The proposed contract, he says, involved compromises made long before the current national conversation about police brutality.

But even Michael Cathcart, the most conservative member on the City Council, says he doesn't know if he can support the proposed contract.

"It still does not comply with the charter of the city of Spokane with regard to an independent ombudsman. I’m disappointed if they’re not there yet," Cathcart says. "Seven years after the charter amendment was approved — 14-15 years after the tragedy that was Otto Zehm."

Cathcart says he wishes he could separate the financial piece from the oversight piece — granting the police department their long-overdue raises without approving the limitations on the ombudsman.


Betsy Wilkerson, the sole black woman on the council, echoes that frustration.

"These people in blue have been waiting so long for the next chapter of their lives," Wilkerson says. "[But] that ombudsman thing that has dogged us forever. The community needs reconciliation on that."

The community needs transparency and accountability from the police department, she says, to provide healing and build trust.

Spokane police shot more people in 2017 than they have in decades; almost half were Native

The protests, she says, have opened the floodgates of decades of locked-up frustration from older black Americans. She recalls the "How Long? Not Long" speech that Martin Luther King, Jr. gave on the capitol steps in Montgomery, Alabama, in 1965.

But says she's not tipping her hand for how she's going to vote on the contract.

"I want to listen. I want to hear," Wilkerson says. "I now represent a large part of the city. I remember that, as black as I am,  I represent others, too."

Beggs hits a similar theme. He still believes the same things he did when he was an attorney fighting for police reform — but he knows that he's now representing both the cops and those who are marching and calling for defunding them.

Even if the council approves the negotiated contract, it will expire at the end of the year.
Negotiations on the next contract will likely start this fall. As the outcry reaches a volume that's rarely ever been seen in Spokane, Beggs says simply punting on the police oversight questions until the next contract has become a lot more difficult because of the protests.

Yet both he and Logue see that as an opportunity for real reform.

"We’ll never have as many sympathetic ears as we will in this moment," Logue says.