Fresh off competing at the International Blues Challenge, Bakin' Phat continues to show Spokane what having the blues is all about 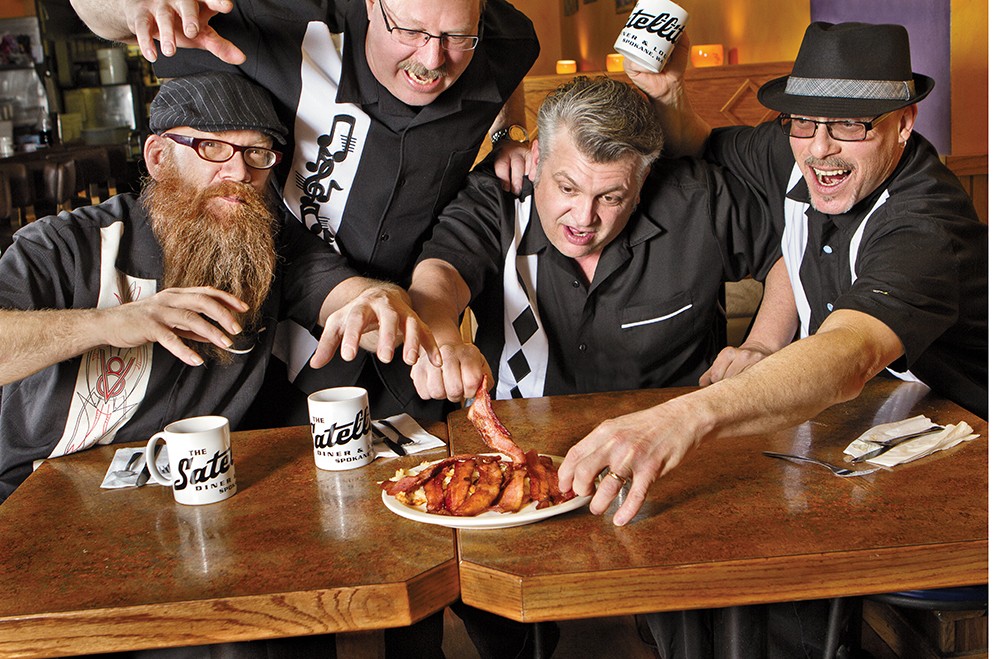 When he's on stage, it's hard to tell what Dave Allen's face really looks like. His fedora is pulled low, glasses shade his eyes, and when not singing into a microphone, he's blowing a mean harmonica. But not seeing Allen's mug adds to Bakin' Phat's intrigue — four middle-aged guys still playing it cool.

This particular night finds the blues band tearing up a private birthday party at the Davenport Hotel. Guests are out on the hardwood dance floor, shaking it like they mean it, suits and party dresses swaying with the heavy rhythms and intricate guitar and harmonica solos.

Bakin' Phat plays a style called "jump blues" with some West Coast swing rolled into it. The music is vivacious, infectious and for a band that's been together for only two years, incredibly slick. And that sound is what's catching people's attention.

After being deemed the Inland Empire Blues Society's Best Blues Band of 2013, they were chosen to represent the region at the International Blues Challenge in Memphis, Tenn., in January. What happened there, with hundreds of world-class acts converging on the city to celebrate the art of the blues, would affect the members of Bakin' Phat profoundly.

"We'd never seen so many musicians, young and old," recalls drummer Ken Danielson. "It was something to have that many musicians wandering up a four-block stretch of road in downtown Memphis. There was music everywhere."

As the guys tell it, that first night the band played at the competition, their set just blistered the crowd, as everyone in the packed room, including waitresses, grooved to the beat. The second night didn't achieve quite the same vibe, and ultimately the band would not go on to the finals, but they acknowledge it was quite an achievement to even make it that far. They spent the rest of the festival connecting with other musicians and touring the historic Sun Records and Orpheum Theater, seeing where blues heroes had performed and recorded.

"I want to go back tomorrow," says bassist Pat Potter. "That Sunday when we were getting on the plane to go home, I wanted to go back to town." The band was guitarist Dennis Higgins' brainchild back in 2012. He brought in Allen, then Danielson and Potter. They had known of one another for years, all playing in various Spokane acts, just never at the same time.

"I wanted to form a blues band that no one had ever heard," Higgins says. "There wasn't this style around here at all."

After a couple of personnel changes, they've found the winning combination — including an ability to write together almost effortlessly. After so short a time together, they have enough material to almost fill an entire 90-minute set with originals.

"The chemistry has settled in so much that if any of us were to leave it wouldn't be Bakin' Phat anymore," says Potter, who joined last year.

It's been decades since the Blues Brothers — Dan Aykroyd and John Belushi — took America by storm on Saturday Night Live, igniting a passion and revival for blues music in the souls of young music aficionados, including some of the Bakin' Phat men.

"They were never as big as Led Zeppelin or anything, but they were a big deal," Potter remembers.

The members of Bakin' Phat realize that younger generations don't know a whole lot about the blues, that it's cast aside as easily as jazz or classical, often thought of as old people's music. People who grow up in Memphis or Chicago are indoctrinated into the genre at birth. But in Spokane, a place that doesn't have a blues club to speak of, it's a lot more challenging to spark interest.

"It's traditionally not a young person's music," Danielson says. "You kind of come across it when you're older, when you actually have the blues."

But when Bakin' Phat has played shows at venues like Zola, they've packed the place. People dance — the band isn't just background noise.

"The younger generation, they like the blues, they just don't know it until they hear it," Higgins says.

Back from Memphis for more than a month, the guys are letting it all sink in. There's talk of getting a second record out by the end of the year — this time with all originals. In the meantime, it's about continuing to play hard, spreading that mystique, growing their fan base.

"We're building this on a very steady basis. Every time we play we pick up a bunch of a new fans," Danielson says. "We have a style that people like — we're connecting with the people." ♦