We ate almost every burger on the Zip's menu, and you're probably jealous about that 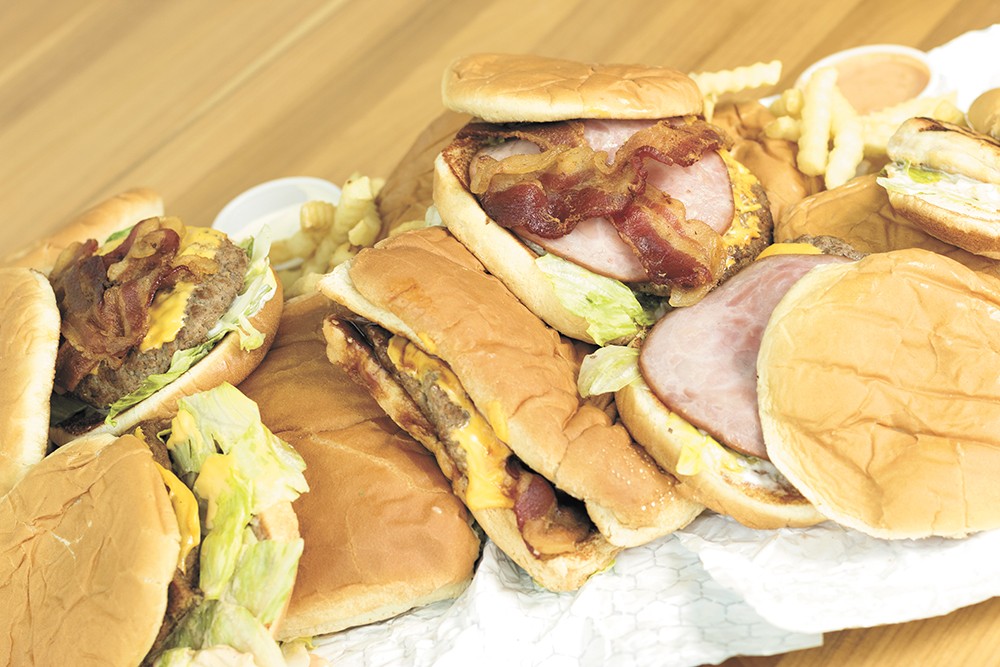 Spokanites have a weird relationship with Zip's Drive-Ins.

First off, folks seem to be largely divided into two camps: those who love the local fast-food chain and those who don't, with the former mostly outnumbering the latter. Zip's is not unlike Richard Sherman or paper grocery bags in this respect.

Those Zip's lovers among us don't let their opinions end with a mere appreciation of Zip's as an abstract concept, but rather will readily tell you which location they prefer and proselytize at length as to the merits of their favorite item. And often, that specifically comes down to the expansive burger options offered on the menu.

Because we love you and we love science (and we love eating, duh), the Inlander staff set out to eat 11 burgers from the Zip's in downtown Spokane and score them on both value and overall taste on a scale of 1 to 10. It was rigorous research that made more than one of us question our belief in burgers altogether. But somebody's got to do this.

Don't agree with our findings? Go to your local Zip's, try all the burgers in one sitting and then send us your opinions, Captain Know-It-All.

Description: A cheeseburger with lettuce and — wait for it — a slice of ham.

Zip's is not afraid to mix up their meats and this is a good example. Our crew appreciated the mixed textures of the marriage of ham and beef. There's a reason this is a tried-and-true classic at Zip's.

Notable taster remark: "As one of the only burgers with mayo, this one is a winner."

This was intimidating just to look at when we brought it out of its foil wrapper. The size will take a second to get your head around, but the aroma — setting it apart from the other barbecue sauce-less burgers — made it unique. No one ate this entire thing, so we can't say how manageable it is to order on your own, but at just under $6, this is a meal for two, giving it a high score on the value scale.

Description: Simple. One patty, one slice of cheese, pickles, ketchup.

We had to recheck our notes to make sure that such a pedestrian-seeming offering could have scored so high. First off, this is the Cheap Eats issue and we were taking value into consideration. But our esteemed testers all gave it positive remarks. Lesson: there is beauty in simplicity.

Zip's bacon seems to make anything better. It's crispy and just greasy enough to spread its flavor over the whole sandwich.

Notable taster remark: "I think this burger should run for mayor on a pro-deliciousness platform."

We never said this was going to be all about the beef. If you're a vegetarian who thinks you can't eat at Zip's, think again.

Notable taster remark: "I thought it was a burger!"

This thing is big. Its weight alone may have been intimidating to some. This may very well violate the "don't eat anything bigger than your head" rule recently adopted by the U.N.

Notable taster remark: "That's a lot of meat. More meat than you'd see at Gold's Gym on a Saturday morning."

Notable taster remark: "This was OK."

Description: Chicken breast on a hoagie roll with lettuce and mayo.

Again, another step away from the beef parade. The grill marks were inviting, but the amount of lettuce put it down the line a bit.

Notable taster remark: "Surprisingly great taste — a little too much money, though."

Notable taster remark: "This is my go-to Zip's order. It's classic, delicious and well-priced," said a member of the crew.

The gang seems to think some lettuce or tomato could have helped.

Notable taster remark: "An overpowering mountain of meat puts this sandwich way out of balance."

Description: A cheeseburger with lettuce and tomato, but topped with ham and bacon.

We're going to get some heat for this. Folks love the Buster around town, but the double dose of pork didn't play well with the committee. We apologize for any hurt feelings.

Notable taster remark: "I love pork. I did not like whatever ham was on this. Bacon helped." ♦

A Brief History of Zip's

What we think of as Spokane's favorite drive-in chain didn't actually begin in Spokane. Zip's Drive-In originated in the Tri-Cities back in 1953, but things didn't take off until founder Robert "Zip" Zuber built a second store on North Division Street, a few blocks from the Gonzaga campus.

After Zuber sold the business, it was sold twice more, eventually landing in the hands of Ed Minor, a potato chip salesman, Don Kelly, who worked for Wonder Bread, and Harold Fettig, who had managed a Zip's. The group added numerous restaurants throughout the region in the subsequent years, and to this day many are still managed by the families of the three men. (Kelly passed away in 2013.)

There are currently 37 Zip's Drive-In's — which are not actually franchises — throughout Washington and Idaho, with the farthest from Spokane being a Boise location.

Keeping It Classic. Or Not.