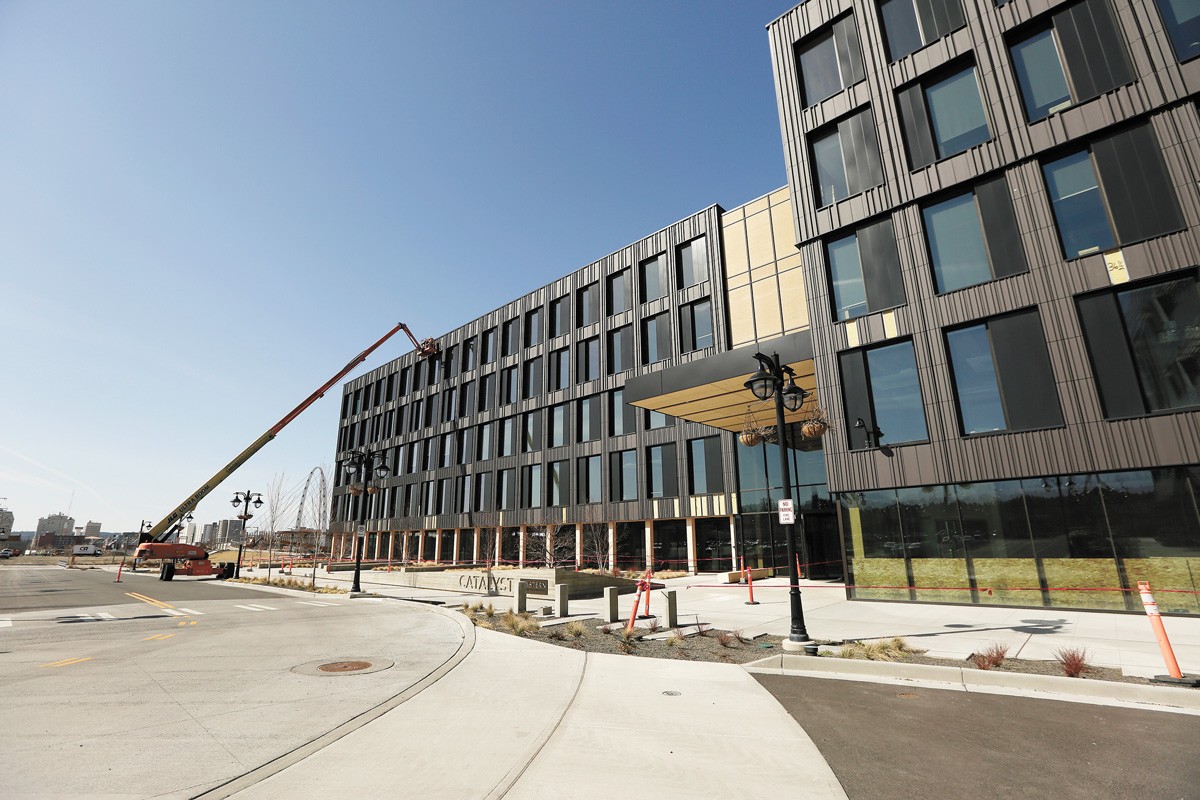 Young Kwak photo
McKinstry hopes the Catalyst Building it built near Spokane's University District in partnership with Avista Development will serve as proof that cutting-edge clean building techniques and technology don't have to come at a premium price.

Even before President Joe Biden announced his historic $2 trillion "American Jobs Plan" on March 31, which includes massive infrastructure investments, it was clear that his proposed solutions would include a focus on cleaner buildings.

The built environment — think office buildings, schools, hospitals, homes and businesses — is one of the largest sources of carbon emissions, largely in the form of energy wasted by inefficient appliances, insulation, lighting and more. Between those inefficiencies and the actual construction and building materials (concrete, for example, is very carbon intensive), buildings represent close to 40 percent of greenhouse gas emissions.

That's partly why McKinstry, a Washington-based national firm that designs, builds, operates and maintains buildings, has focused its work not only on building the next generation of cost-effective, net-zero carbon buildings, but also on proving that public funds can be leveraged to update older buildings and recognize savings.

Before Biden's plan was announced, McKinstry released an open letter of sorts titled "Action for Impact," which proposes that the federal government look to Washington state's policies and success retrofitting older structures as a model for public investment in clean buildings around the nation.

Specifically, they point to energy efficiency grant programs that Washington started in 2009 and 2010 to help public schools and public projects with upgrades.

"Every community really leverages their schools for not just educating their kids, but for community activities and as places of gathering," explains Ash Awad, president and chief market officer for McKinstry. "Anything that gets done in schools becomes an exemplar for the entire community."

The grants enabled multimillion-dollar upgrades and have saved school districts, cities and public agencies up to hundreds of thousands of dollars per year.

What Awad sees as the key to success though is the requirement that applicants provide significant matching funds, which often requires local buy-in and stretches state and other grant dollars further.

As Congress decides how much of Biden's proposal to actually fund, Awad encourages lawmakers to include a similar requirement to match federal money for clean building projects.

"We encourage the feds to ask for leverage, which sounds kind of weird because it seems districts could be mad at us asking for that," Awad says. "But the point we're trying to get to is ... there's so much to do. If you only did what the feds gave you a buck to do, it wouldn't be enough. We hope it's a kickstart, a catalyst."

Fittingly, the company also hopes the Catalyst Building it built near Spokane's University District in partnership with Avista Development (a non-utility subsidiary of the electric and gas company) will serve as functioning proof that cutting-edge clean building techniques and technology don't have to come at a premium price.

Investments in schools are not only key to addressing large, public sources of emissions, but upgrades can dramatically improve the learning experience for students, from the lighting they take tests under to the warmth of their classroom on the coldest winter days, Awad says.

"You've got to have the right physical environment to make sure that you can teach kids in the best way possible," Awad says.

In one local project, a nearly $234,000 grant went to the Colville School District, which provided more than $701,000 in matching funds. With help from that state grant, the district installed a new heating system at Fort Colville Elementary school, retrofitted lighting at four locations and improved summer cooling at Colville High School. Overall, those projects are expected to save the district $31,300 per year.

Awad says there's also a generational benefit to having children educated in efficient buildings, as it can inspire their own interest in sustainable careers later on.

"If schools add that kind of thinking and learning as part of a living laboratory," he says, "students then think about how that can come back to their homes."

The state Department of Commerce's Energy Division oversees the energy grants funded by state and federal dollars. With direction from state lawmakers, 20 percent of the efficiency grants are set aside for the smallest rural towns and districts that may have more difficulty competing for the funds, says Michael Furze, who oversees the Energy Division.

Efficiency grants have also been key for other public projects.

The state Department of Transportation put up more than $1.8 million in matching money to receive a $500,000 grant to upgrade all Washington State Ferry locations with LED lighting and low-flow plumbing, and heating was upgraded at a few locations. The work is expected to save more than $147,000 per year in energy costs.

Meanwhile, the city of Auburn is going to save up to 60 percent on their cost of street lighting after using a $500,000 grant from the state (matched with more than $1.9 million) to retrofit thousands of lights with LEDs and smart controls.

"One of the worst things we can do with public dollars is to burn them," Furze says. "By having inefficient appliances in buildings we're literally burning money."

CATALYST CAN BE REPEATED

But upgrading appliances and lighting alone will not be enough to meet the aggressive carbon reduction targets needed to truly prevent the worst effects of climate change, Awad says.


Changing the overall way we build and power our infrastructure is essential, he says.

In the Catalyst Building, which opened in September 2020, McKinstry worked in a unique partnership with Avista to not only build one of the first zero-carbon buildings in North America, but to test out smart grid technology and districtwide sharing of heat and power.

The five-story building, constructed largely from cross-laminated timber, generates power through solar panels, and with unique connections with other buildings in the new eco-district, it can share and store heat and electricity generation with the other facilities. The systems will reduce the district's reliance on the electrical grid and reduce waste through lost heat or power generation.

Using the so-called Internet of Things, the actual functionality of systems like lighting within the building are also kept at optimal levels to reduce waste, Awad says. Even the most efficient systems can prove inefficient if they're not used properly, he says.

Up to this point public agencies considering zero-carbon projects have typically assumed that work could be at least 20 percent more expensive than other construction, Awad says. But the pretty incredible news is that by working in a private-public partnership, McKinstry showed that efficiencies in the building process and obtaining materials can keep clean projects affordable.

"There's probably no reason that a significant cost premium has to be paid to get a building ready that's zero carbon and zero energy together," Awad says. "We've done the same modeling for Seattle, and we believe we could build Catalyst 2.0 in Seattle at no cost premium."

While the private industry-led team cut out unnecessary subcontractors and the public bid process, Awad says that doesn't mean that trades people weren't happy with the process. Cost savings allowed for more extensive work on the passive building envelope — the space separating the climate inside and outside — which required plenty of skilled work, he says.

"We got to procure the teams in the most cost-effective manner possible," Awad says. "The major trades that are really needed to make a building more efficient end up with more of the interesting work, not less of it." ♦

The original print version of this article was headlined "Building Better"