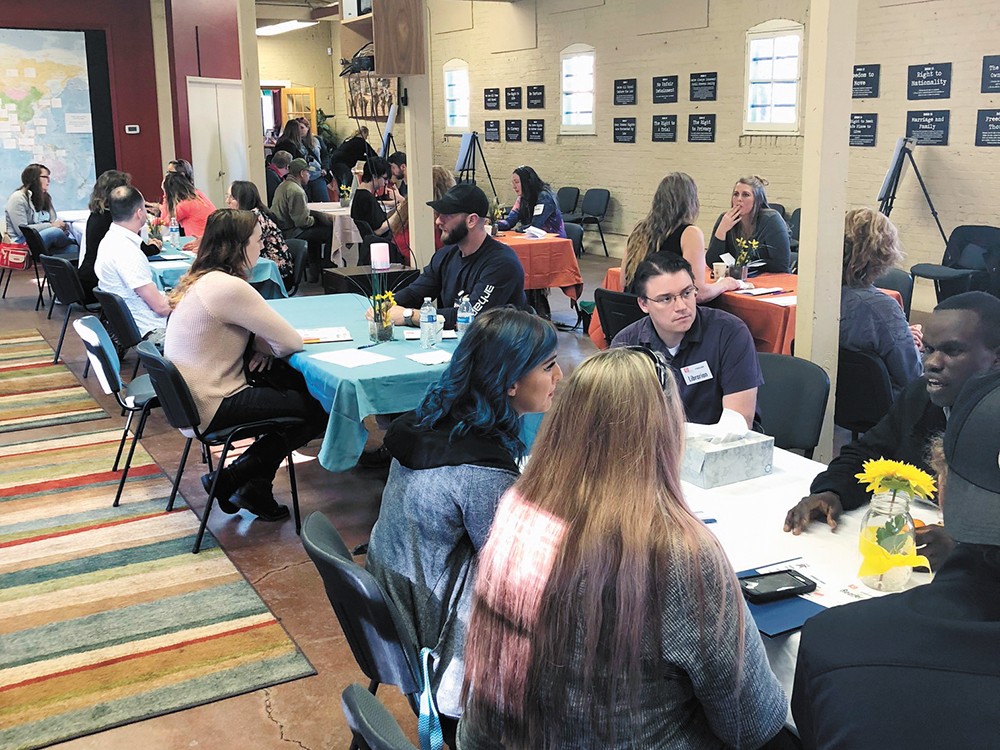 When we talk about her role as

a human "book" for the Human Library project, Jenny Seibert's olive-colored blouse accentuates her hazel-green eyes. Silver pendant earrings oscillate as she talks and her face, framed by frosted wisps of hair, is surprisingly smooth for a 57-year-old.

"It's the hormones," says Seibert, who transitioned from male to female in 2014.

Then she lets loose a laugh as quick and easily dispensed as a curse word or occasional tear while discussing her experiences, like growing up in Cut Bank, Montana — 30 miles south of Canada, west of Glacier National Park — where a happy-go-lucky boy singing show tunes was frowned upon.

"I grew up in a system where not only was I being a bad boy, I was going to hell," she says. Before she transitioned, Seibert went from ranching to studying classic literature at the University of Montana to working for the Central Intelligence Agency's Treasury division (ask about her close encounter with an armed tax evader around the time of the Randy Weaver debacle), and was married with six kids.

Seibert is one of 10 human "books" participating in "Don't Judge a Book By Its Cover," hosted by the Human Rights Education Institute (HREI) as part of its mission to "celebrate diversity and promote human rights by educating, raising awareness and recognizing the value of all humanity." Other books deal with ethnicity, faith, nonconforming gender identity and recovery from substance use.

Readers 15 and older can sign up to "check out" a book for 15 minutes, listen to their stories and ask them questions.

"I hope that readers are able to grow as well as pass on the knowledge that they may be getting from books... a domino effect," says librarian Lindsey Shaw, who, as an intern for North Idaho Pride Alliance, recognized the need to promote understanding for LGBT populations. Later, as an intern for HREI, Shaw facilitated bringing the Human Library to Coeur d'Alene.

The Human Library was created in Denmark around 2000 as an outgrowth of an earlier grassroots movement, Stop the Violence. Membership grew and the activists gained support of the Roskilde music festival organizer, who asked them to create activities that "put focus on anti-violence, encourage dialogue and help to build positive relations among festival visitors," according to humanlibrary.org. To date, Human Library events have occurred in more than 70 countries.

Human Library books don't just benefit readers; when the "books" determine their own narrative and book titles, they're actively promoting their own self-understanding and even healing, both Shaw and Seibert say.

"Being included saves lives," says Seibert, who is concerned by youth suicide related to gender dysphoria. "I hope to find parents who are puzzled by the way their child behaves, and I hope to encourage young ones like me," says Seibert. ♦

The original print version of this article was headlined "Enlightening Reads"