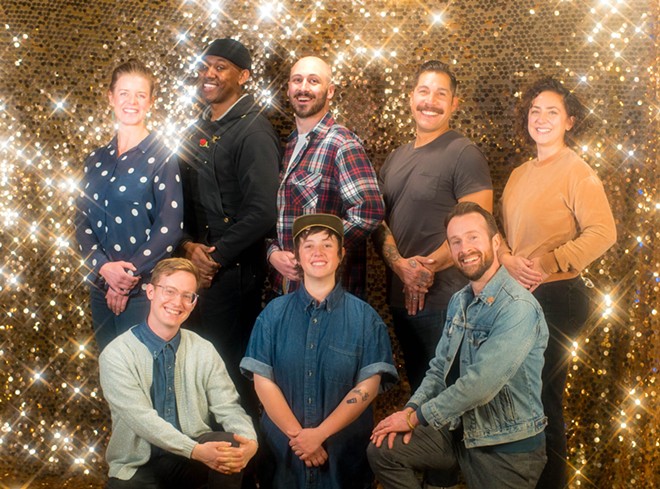 Super Sparkle is returning to say au revoir. The Pacific Northwest music identity tends towards a rather gloomy aesthetic, but for almost six years the Spokane retro-pop collective has been turning local venues into upbeat, sunny, soul-infused dance parties with every energetic set.

Super Sparkle's first Spokane show since 2019 will also serve as its farewell concert as the always-active musicians that comprise the group — including members of Cathedral Pearls, Water Monster, Windoe, and the Spokane Symphony — move onto their own projects. To celebrate the occasion, the band will play literally all of its songs over the course of two sets starting at 8 pm Saturday, Oct. 23 at Lucky You Lounge.

Before bidding adieu, we caught up with Super Sparkle's Karli Ingersoll to chat about the final gig, the niche the band filled, and what the future holds.


INLANDER: How did y'all decide this would be the final Super Sparkle show?

Karli Ingersoll: It just felt like it was just time to move on. We've been doing the band for a long time and it just kind of felt like maybe it had run its course in certain ways. I mean, we're all still friends and I think that we'll probably play music together in other capacities still. There's no like, big thing, it's more just boring band details.

What are you looking forward to in regards to this last concert?

I mean, we just we haven't played [in so long]. We played one show this summer in Sandpoint, but it was an outdoor thing in kind of a unique setting. So we haven't played a club show in about two years. So just really excited for that energy. That's where we are at our best. We thrive on the energy of a small room where you can [create] a collaborative energy with the audience. The music's really fun, and so having that energy will be exciting to feel again. It's been so long.

And we're playing every song we've ever written. So we're doing like two hour-long sets.

How many songs is that total?

Do you have personal favorites among those Super Sparkle songs that you can't wait to play one last time?

Oh, there are so many. I think "Shine Through" is probably like my favorite song to play live. We usually do it like later in the set, and it just has a great build and is really fun. And it has a little kind of sing-along element to it too.

What has Super Sparkle meant to you and what do you feel like is the band's lasting impact?

"Joy" is always the word that comes to my mind when I think of Super Sparkle. It's like this kind of surprising joy. I remember the first couple times we played some of my favorite songs — where we would like try to work them out in practice — and it would just like happen like that. Like you snap your finger and find the groove, and everyone just gels and everyone's smiling. It's such a fun experience.

And then obviously, our shows are similar in that way. Seeing people smiling and having fun and dancing. It's just this kind of contagious joy. That's the big thing for me.

Most of the music I've played throughout years of being a musician... some have been more melancholy. Generally, they're not really like hype-y bands. It's a fun experience to be in something that just exudes that sort of energy.

I imagine you get an even bigger collaborative rush from it due to the sheer size of the band versus just like a trio or something.

Yeah, there's even more power to it. I think [that translates] for the audience too. Seeing a solo act or duo or whatever can be amazing, but when you see eight people on stage it's a bigger thing. It has more innate power to it.

So do the Super Sparkle members have future musical endeavors planned out?

Everyone's already super busy with other stuff. Scott Ryan has a solo project and he's making a record right now. But then Scott and Max [Harnishfeger] are also in an '80s cover band. And Caleb [Brown], the saxophone player, I think will be playing with them some. Caleb plays with his dad's band some, Big Red Barn.

And then Claire [Fieberg] is in Marshall McLean's new band. And she's also playing with the Terrible Buttons. And she's kind of been brewing her own solo thing, too, which is a little slower moving, but I'm hoping she'll work on that more.

Max has Water Monster and Cathedral Pearls, which is the band him and I are in together. We don't have any shows scheduled at the moment, but we've been doing a lot of recording.

I'm doing my solo project Windoe, and I just put out an EP. And then I also do a kind of country and folk covers night at Lucky You once a month with Jenny [Anne Mannan] and Caroline [Fowler].

I think Adrian [Saludes] is the only one that's not in anything else at the moment.

Bryan [Bogue] who plays percussion with us is obviously in the symphony.

Yeah, I mean, all through being in Super Sparkle we've all had other stuff going on. So nothing's really like hugely new. But everyone's sad. I mean, it's definitely mixed feelings for everybody.

Beyond being a collection of various local musicians, how did Spokane shape Super Sparkle?

I think when we started the band, there wasn't a lot of, like, fun music. I think Spokane has a general history and pull towards kind of heavy stuff, like content-wise or genre-wise. It's just kind of where we gravitate.

And so I think when we started the band, that was like, "Man, we really just want to play some fun music." That was more of a rising trend in the indie culture, and still kind of is. That soul movement and like horn sections being used more. And just seeing that happening, was like,  "Oh, that looks so fun."

And maybe not take ourselves too seriously. That was a big part of it too. Scott, Max, and I have all been writing and doing music projects for so long. We put everything into it. It's so serious and so personal. And I was like, let's just do something detached from that pressure, like being "so original" and "so profound." Just kind of let songs be what they feel like they should be and not shy away from that.

That's kind of how it started: an experiment of like, I think we all have some chops to do stuff that's a bit more pop-oriented and have a little bit more fun if we let ourselves go there.

We're just excited to have one last big party.