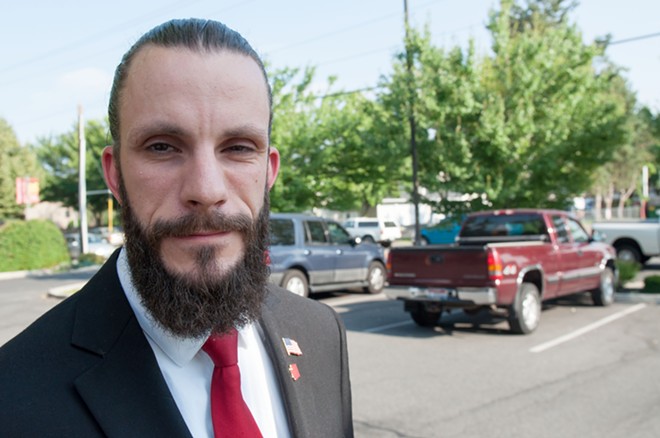 Daniel Walters photo
If there's any politician that you'd think would be supportive of primary contender Jered Bonneau, it would be Spokane Valley Matt Shea. In 2014 and 2016, he refused to support incumbent Rep. Cathy McMorris Rodgers.

And in the primary this year, you could pretty much call Bonneau a "Matt Shea Conservative."

Bonneau listens to Infowars. Shea has been interviewed multiple times on it. Bonneau argues that the government has dramatically abused its powers of surveillance and due process. So has Shea.

Bonneau argues that any restrictions on guns unconstitutional. Shea has called for a show of civil disobedience after Washington state passed a voter initiative requiring background checks for firearm purchases.

Bonneau started a small militia, saying they could help law enforcement in the event of a crisis. Shea has argued that preparing for the governmental collapse means being well-armed and well-trained.

“I’m very saddened that we only have one candidate running against him,” Bonneau says. “As sheriff, he’s done some things against the people of this county.”

And so when Bonneau first announced his candidacy, he specifically noted that he would be seeking Shea's endorsement.

Yet he found himself getting ghosted.

“I've tried meeting with him, but as everybody knows, he’s pretty hard to get ahold of," Bonneau said in an interview with the Inlander last month. "I have not had that meeting with him."

And then, as first reported by the Spokesman-Review, Shea announced that he was supporting McMorris Rodgers instead.

It shows even as McMorris Rodgers has distanced herself from the alt-right, she's been aligning herself more closely with a different part of the GOP fringe — the patriot movement — as she gets ready to face her first truly competitive election.

Even though McMorris Rodgers is nearly certain to survive the top-two primary, her performance — and the performance of her Democratic competitor, former state Sen. Majority Leader Lisa Brown — could have major impacts on fundraising and voter enthusiasm. If McMorris Rodgers crushes Brown in the primary, it could hobble the Democrat for the general election. But if Bonneau — or fellow Trump-loving conservative Dave Saulibio — gained traction it could split the vote.

In 2016, primary candidates like independent Dave Wilson and Republican Tom Horne chipped away at McMorris Rodgers' vote total, resulting in the incumbent only getting a mere 42 percent of the primary vote.

“I reached out to Matt Shea to talk about some of the others that were in the race," McMorris Rodgers told the Spokesman-Review. “And in the course of that conversation, he let me know that he was going to be supporting me.” 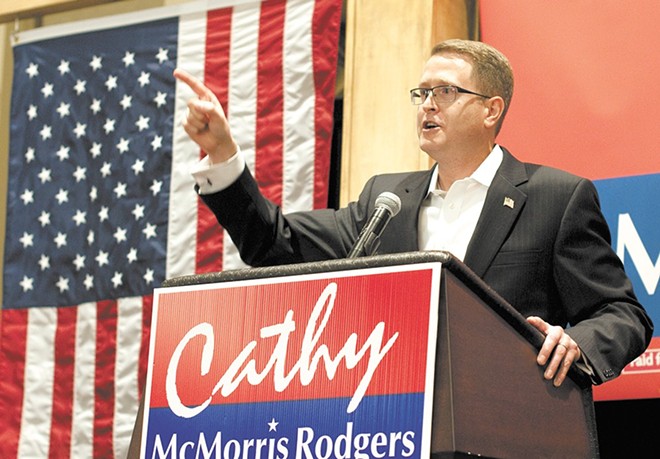 Christian Wilson photo
It's not the first time Washington state Rep. Matt Shea has thrown his support behind U.S. Rep. McMorris Rodgers — but it's been a while.

"I can tell you Cathy McMorris Rogers [sic] has supported bills like the Energy and Infrastructure Act antithetical to Constitutional Conservatism and endorsed against and/or opposed every good conservative in this area," Shea wrote on his website.

Today, that language on his website has changed. Shea's endorsement, in which he spells the congresswoman's name "Cathy McMorris Rogers," argues that she has been an asset.

"The Democrat plan is Trump impeachment and chaos," Shea wrote on his website. "Lisa Brown is a committed socialist arguing for more government, higher taxes, and less freedom. Cathy reached out to me this year and was very helpful in the pardon of the Hammonds and other veterans issues."

Last month, Trump pardoned Dwight Hammond Jr. and Steven Hammond, two ranchers, who had been sentenced to the minimum five years for arson on public lands, after the federal government successfully appealed a lighter sentence.

The Hammond case inspired the occupation of the Malheur National Wildlife Refuge in 2016. Shea was such a supporter of the action he drove to Oregon, intending to speak with the local sheriff to convince him to support the occupation.

Similarly, Shea was heavily involved in championing the 2014 standoff at Cliven Bundy's ranch.

"They stood the line when everybody said they were 'radical' and that they were 'domestic terrorists.' And you know what happened when we stood united on principle and didn't waver?" Shea enthused at a celebration of the standoff in 2014. "We won and those tyrants tucked tail and they ran," Shea says, his finger thrusting into the air. "And that's the way it's supposed to be in America! They're supposed to be afraid of us and not the other way around!"

It could have been something that united Bonneau with Shea.

Bonneau was such a supporter of the Oregon standoff that he got a tattoo on his right shoulder commemorating the death of refuge occupier LaVoy Finicum. He watched a live-stream of the standoff while he was on his break at work.

"They murdered him in cold blood," Bonneau says.

He says he supported the Bundy standoff in Nevada, too, but his wife was nine months pregnant at the time: “She goes, ‘If you go, I’m going to ' kill you,’” Bonneau says, chuckling.

And yet, McMorris Rodgers was the one in the position to reach out and speak with Vice President Mike Pence about the Hammonds. According to the Spokesman-Review, she did so before her conversation with Shea. (Neither Shea nor McMorris Rodgers' team returned the Inlander's request for comment.)

It's not like McMorris Rodgers is unwilling to distance herself from certain controversial figures within her party.

As the Spokane GOP has been shaken from the fallout of its former board chair's defense of local white supremacist James Allsup, meanwhile, some critics on social media have tried to use an old photo of Allsup with McMorris Rodgers to link the two.

Yet after the extent of Allsup's allegiance to the alt-right became very public with the rally in Charlottesville, McMorris Rodgers has repeatedly condemned Allsup and his message, arguing he has no place in the Republican Party.

According to the internal minutes for the Spokane GOP's June 5 meeting, Ashley Stubbs, then communications director for Cathy McMorris Rodgers, warned then-Spokane GOP Chair Cecily Wright and other members of the GOP board that Allsup was a "known neo-Nazi white supremacist."

Stubbs, according to the minutes, specifically pushed for a press release to be issued to condemn Allsup and suggested four specific points to be included in the release.

Nevertheless, Wright hosted Allsup five weeks later at her libertarian-leaning Northwest Grassroots group, and defended Allsup as a victim of "label-lynching." Since then, Wright has stepped down as chair. Several other GOP board members have stepped down as well, including James Allsup's fiancee, Abigail Osborne.

But how McMorris Rodgers has responded to Shea is markedly different. To be clear, Shea, for all his controversial statements, isn't a white supremacist like James Allsup. He isn't a member of the alt-right movement.

Still, Shea has made plenty of waves — and enemies — over the years. And not just for the road rage incident where he pulled out a gun. Former County Commissioner Todd Mielke has recounted Shea demonstrating "spontaneous, extreme anger" at him. Sheriff Ozzie Knezovich calls him a liar and slammed him for trying to link one of his deputies to a triple murder. Before state Sen. Bob McCaslin died, he wrote a letter insisting "under no circumstances would I support Matthew Shea for any public office."

Shea almost never speaks with the press, referring to the Spokesman-Review as the "Socialist Review" and the Inlander as the "."

In the past few years, Shea has devoted much of his time and passion giving speeches arguing that making Eastern Washington the 51st state isn't just ideal, it's feasible. And those who would dismiss Eastern Washington residents as hicks or rubes, he said, were guilty of "label-lynching."

But tellingly, McMorris Rodgers didn't dismiss Shea's 51st state proposal in her interview with the Spokesman-Review. Instead, she sympathized with it, noting she supported a proposal to give each Washington state county its own senator — a proposal which would have strengthened the political power of rural areas of the state significantly.

And last Wednesday, at a Cathy for Congress Pro-Life Unity Rally, Shea was the one who read the pledge of allegiance. He also got a chance to join other legislators in sharing their views. A photo of the event features him in the front row, just a few feet away McMorris Rodgers. 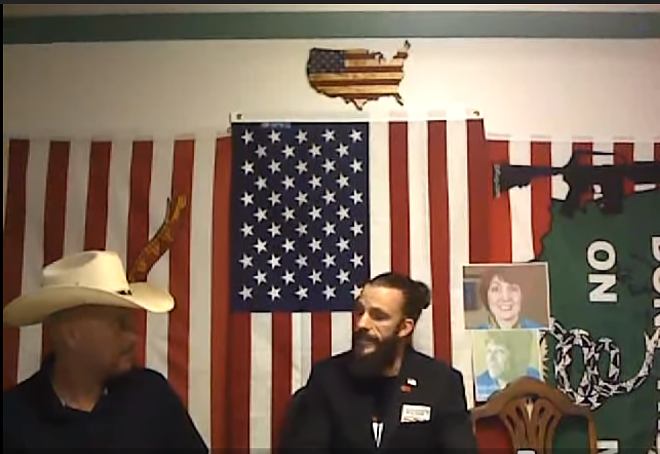 By now, Bonneau doesn't expect to win the primary. He's hoping to get 10 to 15 percent of the vote, but he knows that's a challenge too.

He laughs a little bit of a weary laugh.

Bonneau had hoped to get some traction from a primary debate, inviting McMorris Rodgers and Brown to debate him head-to-head. He says McMorris Rodgers just ignored him. Lisa Brown publicly accepted his challenge:

But the debate never happened. Bonneau says that he reached out to Brown's team, but says they refused to participate in a debate where McMorris Rodgers wasn't participating.

Brown campaign spokesman Jack Sorensen tells the Inlander that Brown welcomed "an opportunity to debate with him and the congresswoman" and says that it is "unfortunate" that Bonneau never heard back from McMorris Rodgers.

Instead, Bonneau held his own "debate." He taped up pictures of McMorris Rodgers and Brown in his basement. And then, with a backdrop imagery of an American flag, a stenciled AR-15 and a "Don't Tread on Me" snake, Bonneau answered questions from one of his strongest supporters. He took the opportunity to slam Lisa Brown ("Socialist values, socialist ideals, backed by a socialist party") and McMorris Rodgers. ("She's been missing for some time. She's been missing from the public eye of Eastern Washington for a very long time. If you find her, please let us know. We would love to hear from her.")

No matter what happens, Bonneau says that he's not going to let a defeat in tonight's primary stop him.

"I'm going to continue. We're not stopping," he tells the Inlander. "We've created this movement that people in this district are sick and tired of career politicians. They're sick and tired of seeing people like Cathy who don't care about their constituents."

"I won't endorse Cathy. I won't endorse either party. I'll probably write myself in," Bonneau says. "Cathy is corrupted. I don't believe in Lisa's [positions] on certain things. I can't support either one of them."