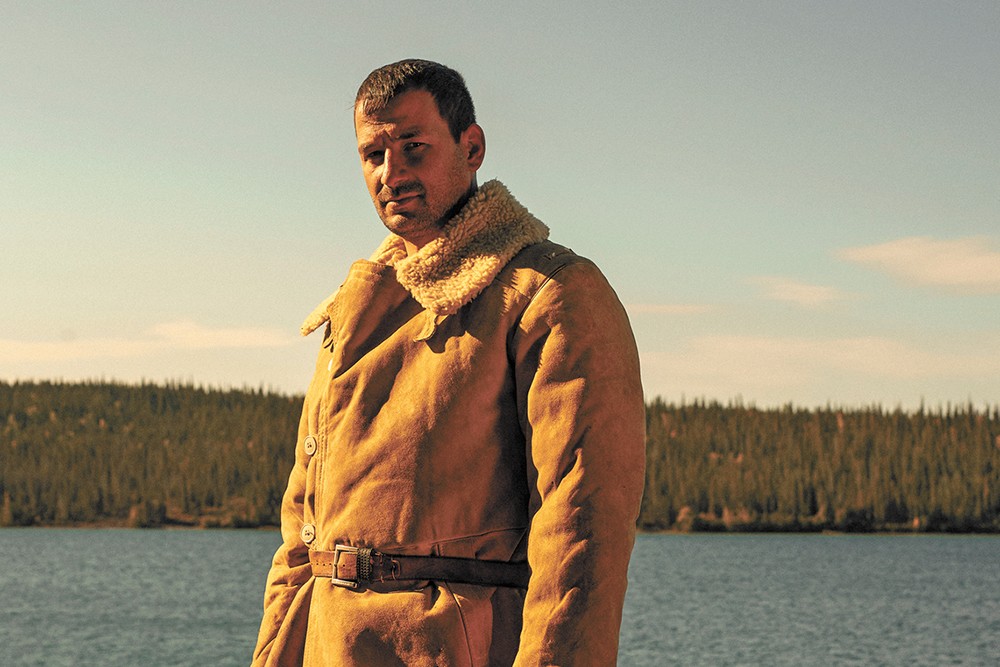 Jordan Jonas is a native of Athol, Idaho.

Stuck in the Arctic alone, dropped in with only a handful of tools, a video camera and no food immediately on hand, Jordan Jonas is positively chill.

The other contestants on the sixth season of Alone, a History Channel outdoor survival reality show now streaming on Netflix, may have fretted about their rumbling stomachs or the dropping temperatures or the encroaching madness of being alone. But throughout nearly all of it, Jonas — a native of Athol, Idaho — seems almost entirely at ease.

Sure, he experiences plenty of setbacks.

He kills a moose, but when he slices the stomach, the guts pour out, contaminating a good portion of the meat. He forgets to take down a ladder and a wolverine climbs it and pillages his food stores. He loses weight and realizes that he can only lose so much more.

But he reacts to all with his wry almost aw-shucks understatement. He chuckles to himself as he talks about the harrowing moments he's experienced.

By contrast, when something good happens? He's ecstatic. He pulls a massive fish out of the hole in the ice and whoops a victory cry.

"Woohoo! Look at that pike!" he yells, staring into the camera with an ice-encrusted beard, "Weehee! I'm in the Arctic!"

Jonas knows that gratitude is crucial.

"I feel mentally crisp," he reassures producers of Alone on Day 77 in the Arctic wilderness. "I feel good."

"I killed a wolverine, too, with a hatchet," he brags to his wife after his victory, using the same tone that other people might use to brag that their boss complimented them on their third-quarter sales presentation.

He attributes his mindset — almost as much as his bow hunting and fire building skills — as one reason why he made it through.

Your mental readiness, how you process the loneliness and isolation and uncertainty, is a crucial part of the survival tool kit.

He says he spoke to another contestant on his season who had all the right training — he'd taken survival courses in the military — but dropped out early because he couldn't handle the isolation.

"He was actually doing very well out there," Jonas says. "He just wasn't ready for the mental aspect."

Mental fitness is one of the biggest lessons that Jonas teaches at his survival school. This summer, he's been offering $1,800 survival expeditions through the Idaho woods. You'll ride out on horseback and spend six days in the Idaho mountains. You'll harvest and forage, learning how to build shelters and catch fish. And also maybe learn a thing or two about psychological resilience.

Jonas has learned from the best. He spent a decade living in Siberia, where he worked with fur trappers and herders from the indigenous Evenki Tribe. He's learned to ride reindeer. And he's learned how to live alone.

"One of the guys sent me out to the land and showed me the ropes for fur trapping," Jonas says. "He left me in the wilderness for like five weeks."

And in an environment like that, mistakes aren't just whoopsy moments. A boneheaded move can get you killed.

"The temperatures are extreme," Jonas says. "There's a small margin of error. Random accidents, unpredictable accidents are the most dangerous."

Jonas says he met an old Evenki man who lived in a teepee, a grizzled herder who'd been saving reindeer herds since the fall of Communism. But the man didn't speak. His sons told Jonas that he got caught outside in bad weather one time with only a cotton hat for his head protection and the damage left him nearly mute.

And Jonas has screwed up, too. He fell through the ice once, he says, when he was "young and dumb." Another time, he was stuck in the middle of nowhere in the winter and let his matches get wet. And then there was the time he tried to siphon gas and ended up swallowing a tremendous amount of fuel.

"I thought, 'I don't know if I'm going to wake up from this when I pass out,'" Jonas says, laughing. "I wrote down my last words."

But here's the payoff for all that risk: incredible stories. He regales the Inlander with an account of being woken up in a Siberian trapping cabin to a dog barking. Maybe the dumb dog was just barking at a squirrel?

It isn't a squirrel. It's a moose. Specifically, it's a moose that's being killed by a Russian bear. The bear runs into the woods, leaving Jonas's camp with a bunch of free moose meat.

But then a few days later, the bear comes back, and begins stalking around their cabin. That's how he ends up in the tall brush, hunting a bear with a Siberian buddy. His Evenki friend is armed with his Soviet-era rifle. He's armed with a camera. He can hear the dog barking.

And then he hears the unmistakable snort of the bear in the brush right next to him.

"My buddy just took off running and he left me there," Jonas says. But Jordan couldn't follow. He'd had a bad knee — blame an injury he suffered when he used to ride freight trains. All he could do is wait.

It's a moment when having the right mindset comes in handy. He doesn't panic.

"Not that many people get killed by bears. Just stay calm. Relaxed. Fairly low odds," he thinks. "It's better not to run anyway, even if I could."

Nearly half a minute passes, a long time to spend with a bear. But then his friend returns.

He's about seven feet tall on his hind legs, he says. His friend fires his magazine into the bear, and the bear runs off to die.

Jonas has survived. And each time he survived — whether from facing down a bear, killing a wolverine or stomaching gasoline — he's become a little smarter at surviving in the future. ♦

SURVIVAL TIPS FROM JORDAN JONAS
Jordan Jonas didn't want to give all of his survival secrets away. For that, he insists, you need to take his class. But here are a few of the basic principles to stick to.

Stay Lit
If you don't have a fire going, have a plan to start one.

"You don't want to ever find yourself in a situation where you have to rub sticks together," he says. "Make sure your matches are protected or your fire steel is not going to get lost."

Stay Warm
"Nobody in Siberia lives through the winters just because they're really tough and can handle the cold," Jonas says. Wool is one of the best materials to be prepared. If you're not, there are a few strategies you can rely on. Maybe build a snow cave. Maybe have two fires, one of each side of you. And in particular, don't let your feet get frostbite.

"Before they go numb, stop, dry your socks out, start a fire," Jonas says. "That's something a lot of people forget."

Stay on Target
"You need to be a bit of a jack of all trades to survive out there," Jonas says.

Address your most immediate need first. Water is the most important resource, but usually it's relatively easy to find a water source. If it's cold, you might want to focus on heat and shelter. Otherwise, look for food. Fishing is often your best bet once you know how to do it, he says. And if your goal is to be rescued, toss a lot of green boughs into the fire to create a ton of visible smoke.

Stay Sane
When you're trying to survive, it may seem absurd to be thankful. But Jonas says that gratitude is one of the most crucial survival skills.

"If you don't have the right mental framework, you can really kind of make you go crazy a little bit," Jonas says. "Positive gratitude for what you have will help you get through some of the suffering."

How Spokane's TV habits compare to the rest of the U.S.