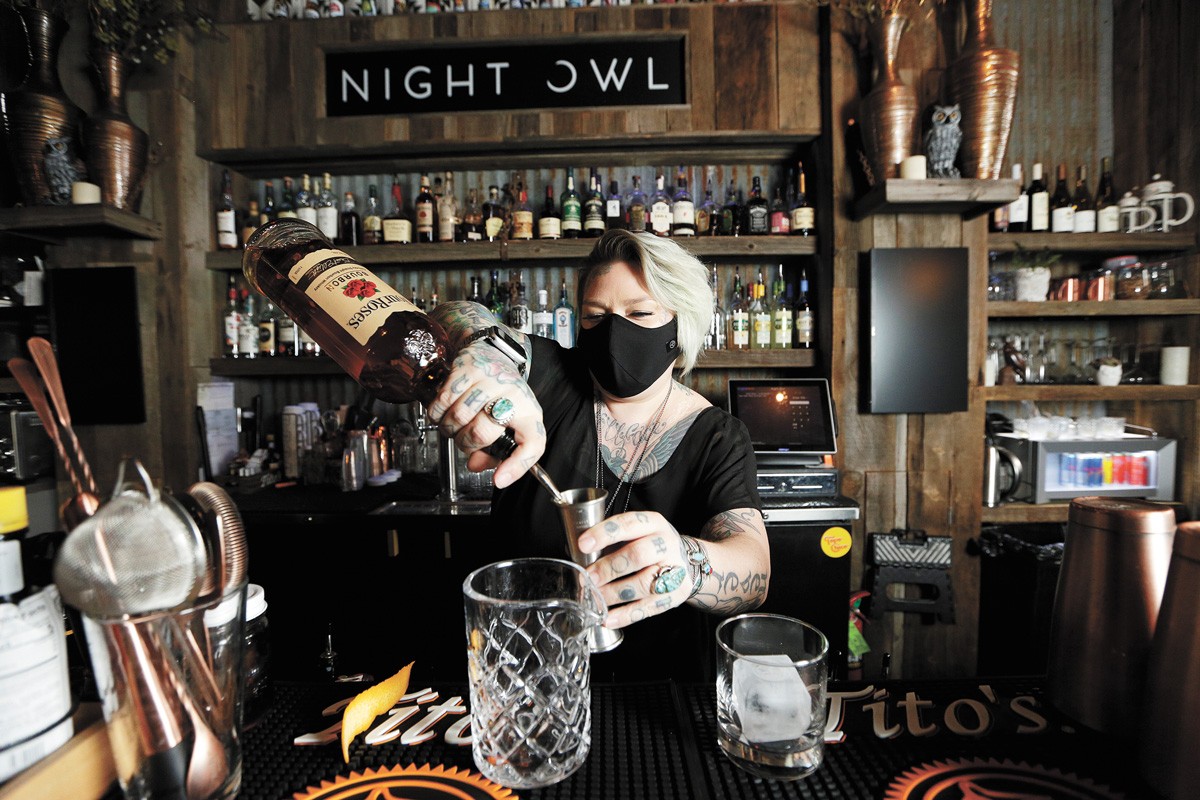 After a year of uncertainty, several bartenders in Spokane are hoping soon to be back behind the bar without interruption as pandemic recovery continues one year after its onset.

Despite Spokane County's move this week to Phase Three of Washington state's reopening plan, allowing eating and drinking establishments to move to 50 percent capacity, some bars still haven't reopened since the initial stay-home order last March. One of those is Berserk, a downtown Spokane bar and live music venue.

"We're feeling extremely positive about not having to close [permanently], which would be terrible to us all," says Berserk co-owner Beth McRae, who operates the bar with her husband, Lon, and business partner James Hunt. The venue has a fourth silent owner.

"We spent our two-year anniversary in COVID jail, and hopefully not again for the third, which is June 6," McRae continues.

In the time since Berserk closed up for its last night of service over a year ago, McRae says she was hired full-time by Volunteers of America to cook meals at its Hope House women's shelter. She says Lon is still on unemployment, and they've been trying to save by not making unnecessary purchases. Hunt, meanwhile, has been streaming live DJ sets on Twitch to bring in some income until the bar reopens.

Even as other bars across the state have been allowed to reopen under ever-changing guidelines, one thing that's held back Berserk is its liquor license classification as a nightclub. Until recently, venues in this class were excluded from reopening until Phase Four. Newly revised guidelines issued in early March now stipulate that such venues can operate if food is served, among many other rules, including a ban on dancing and a requirement that all guests must be seated during any live performances. McRae says Berserk's owners are now working on plans to reopen under this change at a date yet to be determined.

To comply with these temporary rules, other bars in downtown Spokane have added limited food offerings, including Night Owl. The bar is located on a popular downtown block of nightlife venues between Main and Spokane Falls Boulevard, and has partnered with local restaurant Tasty Bun to serve reheatable snacks alongside its craft cocktails.

Bartender Stephanie Goldsmith landed at Night Owl last spring after bars could reopen following the state's initial spring lockdown that lasted about two months. Before that, Goldsmith worked at Bon Bon and the Viking, but couldn't resume either position because Viking reduced staffing and Bon Bon inside the Garland Theater still hasn't reopened.

This past year, she says, "was definitely a roller coaster. I think I realized once they announced the shutdown was happening that it was going to be longer than two weeks, but I don't think any of us could have predicted it would have been a year that we'd be going through this still."

"Since then, it's transitioned from a side project to full cocktail classes online, and each week it's a different program with components delivered to your door," she says. "It's been a lot of fun, and it's really cool bringing people together."

While things slowly ramp back up at Night Owl, Goldsmith says she and other staff have kept busy working on updates to the space, such as adding LED lights and a new sound system.

"It's been really nice over these past few weeks to see people slowly open back up. We finally have a little bit of hope that we're moving forward," she says. "When we reopen [fully], it'll be a really great place for cocktails and dancing."

Other bartenders displaced from previous gigs include Jasmine Barnes, formerly general manager of the Garland Theater and Bon Bon. She's taken a role as assistant manager of Nectar Beer and Wine in Kendall Yards, and says she probably won't be returning full time to the Garland when it reopens.

"I'm 100 percent going to help them reopen, being I was there the longest and worked in every part of it," Barnes adds. "My heart is in Garland, and I'll go make sure everything reopens smoothly and leads to success, but I'll be staying with Nectar since they gave me such a great opportunity and I've really grown with the staff there."

While the scattering of former employees-turned-friends like those at Bon Bon and the Garland Theater isn't uncommon, Barnes says she's also aware that several of her former colleagues are still "patiently waiting to get right back to Garland."

"We were such a tight-knit group of folks," she says. "It is really hard when I think about Bon Bon and all my regulars. I feel like I lost my entire group of friends and my client base. It's been really difficult not seeing anyone anymore, and I miss making cocktails."

Not all established bartenders, however, were forced to leave longtime employers, including Simon Moorby at Hogwash Whiskey Den and Inland Pacific Kitchen. He's been managing the bar programs at both venues since they opened in late 2016.

Though it's certainly not been business as usual, Moorby and his team, which includes his girlfriend and fellow bartender Erin Fasbender, have gotten creative with to-go cocktails during the weeks Hogwash and Inland Pacific Kitchen (IPK) have been open. Both have operated with an on-and-off schedule due to restrictions, and when business has slowed down to a trickle.

"[Takeout] seemed to go better at certain times, and then again it wasn't, and nothing was sustainable," Moorby says. "It wasn't enough to keep the business afloat, and we went through several phases with [to-go] and also trying to juggle with the idea of reopening at a lesser capacity, which we finally did in June at IPK because it was a safer environment" than Hogwash.

Moorby says through all the ups and downs, he feels fortunate to have the support and understanding of the restaurant and bar's owners, Darby and Jovanka McKee.

"They've made sure none of us are struggling financially, and luckily we don't find ourselves in that situation, whereas, unfortunately, a lot of businesses can't say the same." ♦