What do you fear most about climate change?

The obvious, destruction of Earth. But I think that the inability now for a large number of people to realize that we can help slow down climate change and that it's already pretty bad now. And people don't really realize that. So I think my fear is that it'll get bad and then humans will understand too late how bad it really is. 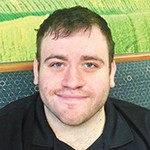 Honestly, the fact that we're all going to be underwater.

How should we prevent that from happening as a society?

Do you think that enough people are aware of the validity of climate change?

A lot of them know about it, but just don't care.

As a resident of Alaska I see examples of good policies... And I see a lot of other policies do a lot of damage, and while they may save the environment, they oftentimes hurt the little people and let the big people off the hook.

I would be really sad if all the polar bears went away. I heard about the wildlife, if climate change was to impact them to where we would have a lot more extinct or even more endangered species that would be really sad because they hold a lot of value for nature and for society.

I just have no idea what's going to happen. I just watched Blue Planet two days ago and they were talking about how in the past decade 40 percent of the polar ice caps melted. In the past decade. Which I knew that was happening, but I didn't know it was that severe.