What is your favorite Beatles song?

What is your favorite Beatles album?

I like Rubber Soul, because it was before they got all psychedelic and drugged-out. There's a little bit of that, and it's still British Invasion pop stuff. 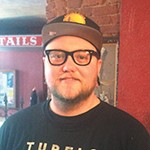 Hmmm. Not big on the Beatles.

What impact do you think the Beatles had?

As far as song structure, they made and established one that nearly everyone follows.

Do you still listen to the Beatles?

Every once in a while, but not too much.

I've always heard Sgt. Pepper was great. I'm a hip-hop guy, so I have heard a lot of their music sampled.

What impact do you think the Beatles had?

They were an iconic group. They had an impression on the States, and you can still hear it to this day.

"Yesterday." It makes me think of yesterday, I guess.

I guess Rubber Soul. It came out when I was in grade school.

Staring down the most significant election of our lifetimes, what do you do with all of this political anxiety?