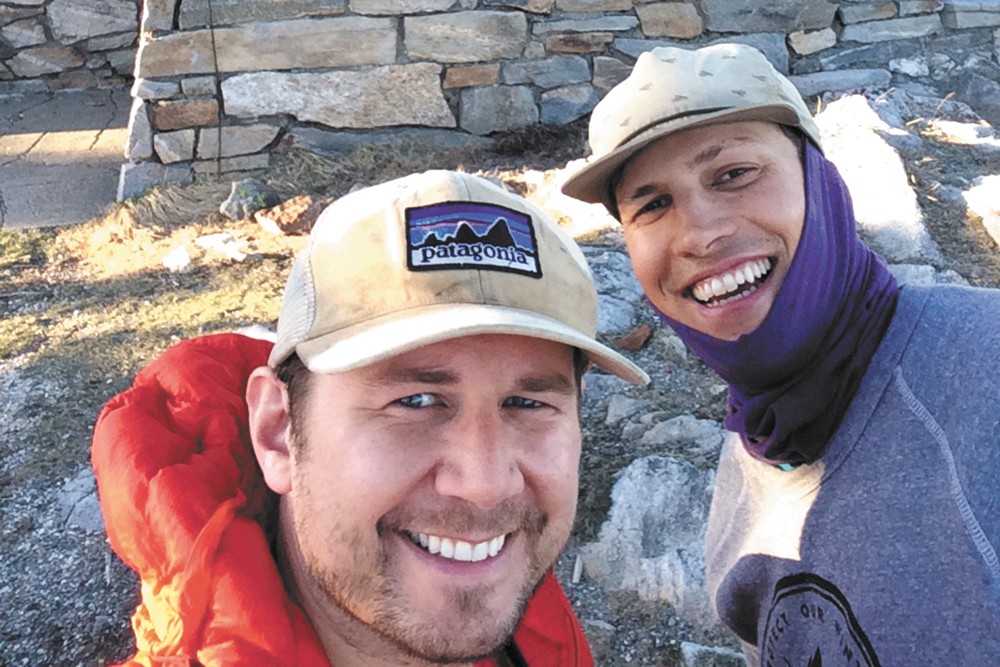 The author (left) and John Stifter on top of Mount Spokane.

It has been a remarkably odd ski season in the Inland Empire. We saw tree-toppling snow in early October followed quickly by substantial snow up high. Then the Pineapple Express rolled in, and we were all back to running in shorts and an extended biking season. Finally, in late December, we were back to seeing significant snow accumulation in the forecast. Unfortunately, it was delivered in the form of rain down low and wind-loading up high.

With substantial avalanche hazards, the backcountry has been limited, finding me at the base of Schweitzer after a day of skiing in near vertigo conditions. With me is John Stifter, one of my favorite ski buddies and ski mentors, and more pertinent to you, the reader, Stifter was a 12-year staffer at Powder, the so-called "skier's magazine," including three years as editor-in-chief.

Due to a broken ankle, which has him sidelined from chairlift banter and turns through Headwall, Stifter, who is a Spokane native, has a twisting, turning story of travel, skiing, loss, and a continued positive outlook on life.

With the enticing reward of tater tots and Rainier bottles, he agreed to sit down with me to have a lighthearted talk about the ski industry, his experience through the decades, and how it has changed and changed him.

Double-chair deep talks, man. It is a ride back in time, setting the scene for intimate conversations. Chair 6 was 16 minutes long; you can't not talk for that long, especially when skiing. It forces you to interact with complete strangers.

As the editor of Powder and devoting almost half your life to that magazine, what is the most significant change you have seen in the ski industry?

Backcountry skiing and the subsequent technology — bindings, boots, beacons, walk mode, outerwear, it's all different from when I started. I also think that the proliferation of skiing in Japan by Westerners has shifted destination skiing away from your normal Rocky Mountain resorts.

Dark and dingy. Poolside is fun, but really dark and classic is awesome. Two of my favorites are Rafters at Red Mountain and the Sitzmark Club at Alta, Utah. You can't find more of an authentic buzz after a day of skiing.

I prefer seeing a perfect daffy, but they are hard to pull off. If we're talking about favorite old school airs, then I would have to say Cossack, which is basically a spread-eagle with your poles pushed down between your legs.

We have known each other our entire lives, and I personally have you to thank for making me a better skier. In your life, who is the person that significantly influenced your ski experience and how?

No one has ever asked me that question. There are so many. But Andrew Eugster, who is from Spokane and grew up skiing Schweitzer, rocked my world as a youngster when he was boosting Bertha rock in North Bowl in his yellow North Face jacket and on K2 Extremes. He now lives outside Seattle and is a ski rep for Line Skis.

What was the expectation vs. reality of becoming the editor of Powder?

The reality was that much of the job was managing others, and that is difficult. I thought it would be more travel and autonomy, but I soon realized you're responsible for everything and have exposure to depressing decisions made by bean counters. And when you love it so much and take it all too seriously, you spend more time in the office than you ever thought possible.

What is better, tater tots or tachos (tater tot nachos)?

It all comes down to time. Tachos are an exciting feast with friends, with tots rather than chips as the foundation. It requires an adaptable mindset.

Skiing can be a miserably cold and uncomfortable sport. Any advice on how to entice the next generation to ride snow on skis or boards?

Feeling gravity and going downhill on snow is the most fun thing you can do with friends because you're outside in the mountains and, for the most part, there are no rules. And eventually, no parents, no coaches. You're free to go anywhere, explore, and then be able to tell silly jokes and chew bubblegum on the chairlift. Plus, skiing is a lifetime activity.

After leaving Powder, John and his wife took a yearlong road trip exploring the U.S. and then landed back in Spokane. John has gone back to school at Whitworth to become a family and marriage counselor. Once his doctor gives him the green light to ski, we will be back to tater tots, chairlift banter and being outside. I look forward to that day. ♦

The original print version of this article was headlined "Tater Tots or Tachos?"