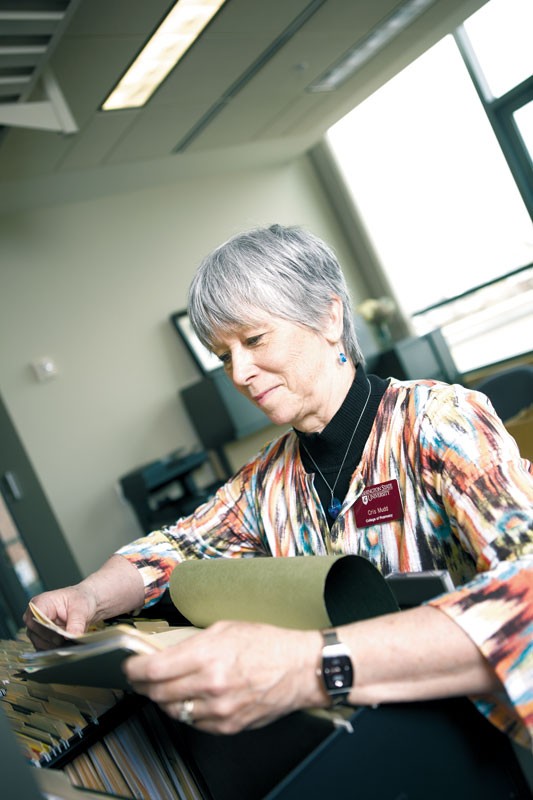 Stephen Schlange
I missed being part of a team, says Cris Mudd, who gave up retirement for a job in September.

Cris Mudd wasn’t a big fan of being retired. After teaching in the athletic department at the Community Colleges of Spokane for decades, Mudd, 66, did what so many people do in middle age. She left the nation’s workforce.

She stayed busy as a retiree — volunteering at Christ Clinic two days a week, for example — but it just wasn’t enough.

“I’m not somebody who works on quilts. I’m not really a crafts person,” she says. “I babysat the grandchildren — until they had the audacity to go to school.”

Following the lead of her seven grandkids, after 10 years in retirement, she went back to school. She took a computer class at the Institute for Extended Learning, which is part of the Community Colleges of Spokane. She learned the ins and outs of Microsoft Word, Excel and PowerPoint — programs necessary for many jobs nowadays.

On a lark last September, she says, she applied for a job as an office assistant at the College of Pharmacy at WSU Spokane. She got it, beating 130 other applicants. “I missed being part of the team,” she says.

“I missed having a parking pass on my car that says, ‘She does something. Somebody finds her valuable. She’s got a job.’ I missed saying to people, ‘Here’s what I do, this is my job.’”

Mudd’s path and point of view are not hers alone. With the baby boomer generation aging into retirement, and with medical advances extending life decades beyond traditional retirement age, many are finding themselves in the same predicament.

“When Social Security was created, the idea was that you had less than 10 years to live in a state of winding down. So a period of extended leisure made sense,” says Marci Alboher, a vice president at Civic Ventures, a research firm focused on baby boomers, work and social purpose. “Now that we’ve added decades or more — and decades in good health for many — it makes sense to push ‘retirement’ to a later stage and to fill your time with some combination of paid and unpaid activities.”

But it’s not just the issue of needing something to do. Recent studies have shown that working after retirement can make you happier and healthier. The paycheck doesn’t hurt, either.

A study published last year in the The Journal of Gerontology looked into the effects volunteering at a Baltimore public school had on women at risk for cognitive impairment. The women, who averaged 67 years old, took a cognitive test at the beginning of their volunteering stint and again, six months later, at the end. They improved by 40 percent.

“Our bodies are meant to move. And our brains are built for novelty,” the study’s author, Michelle Carlson, told the New York Times.

“Keeping active as we age is critical to positive mental well-being,” says Alboher. “In short, staying active and engaged in later life does keep people healthier and happier, staving off depression and physical and mental decline.”

Retirees are already getting it. Of the 78 million boomers out there either in or facing retirement, 9 million have launched into these “encore careers,” according to a study done by MetLife and Civic Ventures. Most of them started thinking about working after “retirement” at the age of 50.

Marc Freedman, author of The Big Shift: Navigating the New Stage Beyond Midlife, says that being old isn’t a state of mind but something put upon us by society. Retirement age is an invented stage of life, much like adolescence.

“We created retirement at a juncture when older people were seen as pitiable — too old to work, too young to die — and they needed a category to better serve their needs,” he said in an interview with AARP last year. “And that’s why we’re going to need to create a category between midlife and old age.”

Part of the reason for this, Freedman says, is the simple fact that we’re living longer. A 30-year retirement is “simply unsustainable. Who can afford to retire for 30 years?”

It’s unsustainable not just for the retiree, but also for the nation. Two Boston-area economists recently argued that there will be more jobs than people to fill them by 2018. Contrary to the belief that boomers are holding on to jobs that subsequent generations want, it looks as though the nation’s ability to remain productive relies on them.

Like Ed Sawatzki. After 30 years running a grain elevator at a Spokane mill, Sawatzki retired at the age of 55. He went back to school and soon had a degree in K-12 education, with teaching certificates in English and history.

Sawatzki’s now 68 and teaches business writing and business math at the Institute for Extended Learning.