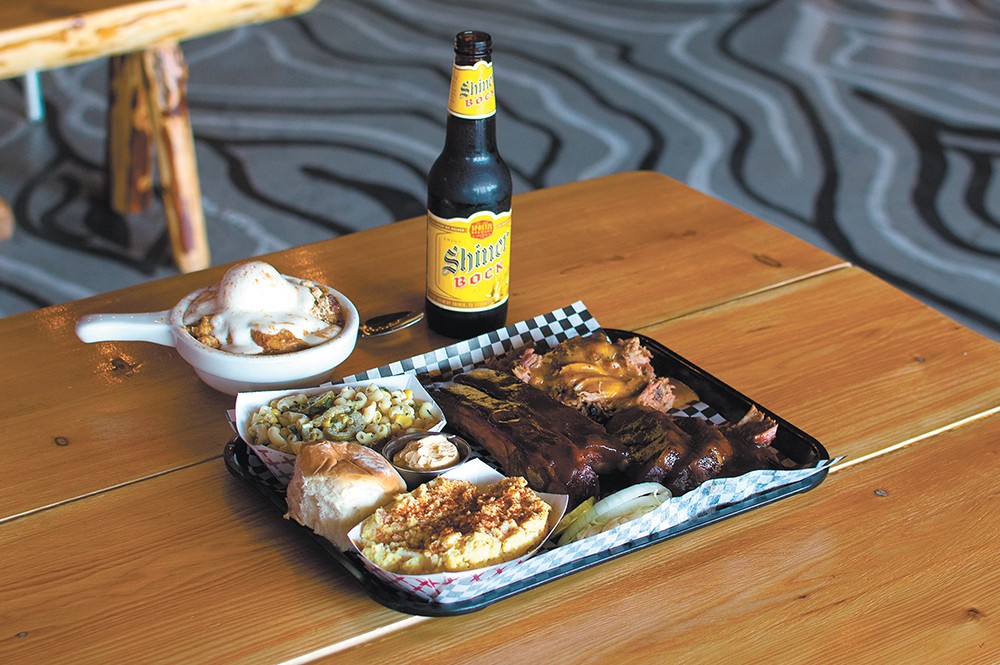 Ray Wilson is quick to say he's a native of the Pacific Northwest.

He doesn't have barbecue sauce coursing through his veins, like some natives of the South claim. His love of barbecue started simply with a taste for quality meat forged through experimentation in his own kitchen, and travel to places where barbecue is as important as religion or football.

"I've been down to Texas 10 or 12 times," says the avowed Dallas Cowboys fan and Nine Mile Falls native. "I just try things and see what works. [Cook] slow and low, play with the smoker, find what's good. Keep it simple, you know?"

Wilson's been learning barbecue on the job since 2004, when he and some buddies opened the now-defunct Boulevard House of Music in downtown Spokane, got a little smoker and started doing some catering. His skills expanded as he opened the Monterey Café in Spokane and then in Cheney (there called the Monterey Pub).

After selling those restaurants, he opened the all-barbecue, all-the-time Outlaw BBQ & Cater Market in May, and he's working to pay homage to Texas barbecue while catering to local tastes and his own love of, say, Carolina-style mustard sauce for his pulled pork.

"We wrap and 'Kansas City crunch' our brisket," Wilson says. "So we smoke them for eight hours, then we wrap them in foil and smoke them another four hours. That's how they come out real tender. I learned it from an old Kansas City airline pilot. He was the raddest guy, he came in and said, 'Son, let me show you how to smoke that brisket!' And he did!"

The results are obvious, as Wilson's brisket is delicious. And whether or not "real Texans" would endorse a Kansas City approach, people clearly love the stuff; he goes through about 880 pounds of beef brisket weekly, in addition to 450 pounds of pork butt and between 65 and 85 racks of ribs.

When Wilson opened his tall smoker to reveal multiple racks of brisket and pork cooking away, this barbecue freak nearly teared up at the sight of the glorious bounty. Happily, it tasted as good as it looked. The pulled pork was excellent, including that Carolina sauce, and the rib was tender enough to literally fall off the bone when I bit into it. Outlaw offers a full array of the expected side dishes, from baked beans to coleslaw, and an array of combination plates and sandwiches.

Outlaw's interior is a wood-heavy wonder built by Wilson himself, from the long bar covered with 26,978 pennies to picnic tables and chairs all made from wood cut from his family's Nine Mile Falls property. On those tables, you'll find rolls of paper towels, silverware in Mason jars, and perhaps a glass of Texas beer favorite Shiner Bock; Wilson says Outlaw is the only Spokane spot with Shiner on tap. Classic country like Waylon Jennings and George Jones plays on the shop's stereo, and the walls are covered with illustrations of "outlaws" like Clint Eastwood and Willie Nelson.

Wilson has tweaked Outlaw a little since opening. The mac and cheese proved too spicy for most tastes, and the cafeteria-style setup was replaced with table service and a more "family-friendly" vibe. Even so, there's no fighting the sense Spokane has something new when one enters Outlaw's front door.

"We try to give you an experience when you come here," Wilson says. "You're getting the full Texas experience."

And if the barbecue isn't strictly true "Texas," it's authentically tasty. ♦