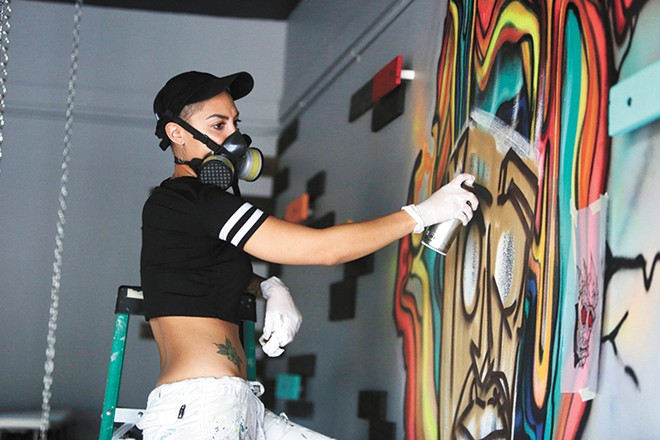 It's hard for artist Amber Hoit to describe her style, in part because she doesn't want to be pinned down to just one thing.

Her art, often mural work now, is part pop art, part pop culture, part realism, part surrealism. It's not unusual to see a black background with neon pops of color and a focus on Afrocentric characters.

The 30-year-old self-trained artist says art was initially an outlet for her as a teenager while moving from school to school, from Spokane to Seattle and back. She was interested in punk and skating culture, and from that "skate or die" mentality she says she adopted her own "art or die" mantra, which she scribbled over and over in sketchbooks.

"A lot of my stuff was morbid art, and that's where I was back then," Hoit says.

But that's also about the time she started developing a character of sorts who's evolved in her artwork over the years. At first, it was a girl loosely based on herself, with curly bubble hair and often a dazed look, Hoit says.

"It's weird for me to explain now, but back then it was very race-related for me. I felt very out of place a lot. I'm mixed — I'm half Black, half White, and living in Spokane and Seattle, I've always felt kind of displaced," Hoit says. "That was kind of my way to describe how I felt inside, like I had to put on a face. It's kind of this clown character."

Over time, the character, which embodied how Hoit didn't feel White or Black enough, went from clown-like to a sort of pop-art cartoon with flowing, colorful hair.

"It went from that, to looking more like a clown, to a more Afrocentric style. I think it was a little more of me wanting to accept the other side of me or a mixture of both," Hoit says. "People responded really well when I kind of mixed those styles together."

Now, Hoit says she rarely uses skin tones in her artwork, instead opting for colors like bright blues or greens when working on portraits. For commissioned work, she's often asked to paint characters from TV shows or comic books, where she regularly implements those bright colors.

Recently, her work has included more murals around Spokane. She was asked to be one of 16 artists who helped paint the Black Lives Matter mural on the Seven2 and 14Four building downtown this summer, which she says was powerful to work on.

"I was so honored," Hoit says.

In her piece, Hoit chose to highlight activist Angela Davis. The piece in some ways blends her pop art character with her skill for portraiture, with Davis depicted with bright teal skin on a pink letter C.

"I put up top, 'Wanted by the FBI,'" Hoit says. "I wanted to be a little in your face, like this is ridiculous, they're calling people Antifa, terrorists. ... Angela Davis is just the most iconic fighter for everybody."

For the most part, Hoit says her experience painting the mural was positive, even as that time was extremely emotionally draining. Many came by while she was up on the scissor lift painting to say thanks and share their support.

But not everyone responded well. Some drove by shouting, "All lives matter!" One day when Hoit was up on the lift alone, someone parked near the end of the mural for a long time.

"I was scared for my life. ... I stopped painting and I'm hyper aware now," Hoit says. "The guy gets out of the car, ruffles in the back seat, and I don't know what he's doing. So I stand there and watch, because if he pulls out a gun, I don't know what I'm gonna do. It felt like an eternity."

Luckily, a man pulled into the parking lot with his daughter to thank her, and Hoit says she asked him to stay. The man instantly understood and remained until it was clear the other man wasn't there to hurt her.

When the mural was finally finished and people came to see it, Hoit says she watched a woman show up with her entire family for an emotional, quiet moment.

"This is a Black family, and they started crying," Hoit says. "I'm pretty feisty and tough for the most part. I don't really cry, but I was just done. I started bawling in my car. It was heavy."

Unfortunately, only a few short days later vandals threw red, white and blue paint across the word "Black" on the mural. Hoit and the other artists were asked to restore the artwork they'd so painstakingly put up.

But in reflecting on the power of art, the support that artists gave one another through the project, and the recognition that artists of color are getting in this moment, Hoit sees some positives.

"I think it inspires people to keep going and to not back down, which is really scary right now because I feel like they really want us to shut up and be quiet," Hoit says. "I think that art is a protest in itself."

She hopes people won't just hire Black artists because of this moment, but because they are talented and deserve to be seen and heard. In general, she sees more regional artists getting recognition, which is powerful.

"Spokane Arts and Terrain have both really been pushing art here," Hoit says. "I start getting resentful of Spokane, but it makes me want to stay. It may be slow sometimes, but the progression is there. I don't think I would stay in this town if the arts weren't promoted as much." ♦

Hoit offers her work through her painting business AOD Painting (for both "art of design" and a little throwback to "art or die"), and some of her pieces can be seen on her Instagram page @aodpainting. Her angel wing murals and others can be found at establishments around the community.