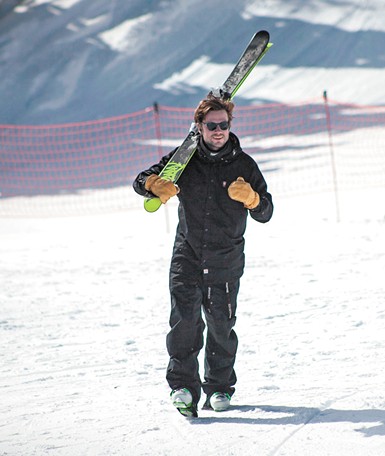 Pete Arneson polished his skills at Schweitzer and Mt. Spokane.

I learned how to slide a rail in a backyard before I actually made a turn on a pair of skis.

That's not the most conventional way to start skiing, but it obviously worked for professional slopestyle skiing judge Pete Arneson. Raised in Spokane, Pete has been judging slopestyle events for almost 10 years. He's one of the guys you see on TV judging ski events like the X-Games, Dew Tour and the Olympics' skiers run.

Pete's skiing and ski-coaching background made for an easy transition into judging competition ski runs.

In his early teens Pete was a snowboarder, but with some persuasion — coercion, maybe — by his childhood friend, Pete put on some snow skis.

"I had a friend named Jason Guthrie who invited me to his condo at Schweitzer," Pete recalls. "Jason told me that I wasn't allowed to snowboard and that he was going to teach me how to ski. That was my first time. I was 14 and I was pretty much hooked after that. I mowed lawns all that summer and bought myself my first skis, a pair of 169 K2 Public Enemies."

Hooked and determined to be a good skier, Pete spent the weekends at Schweitzer and many evenings after school under the lights night skiing at Mt. Spokane. Pete was infatuated with skiing where he also tried to gather as much information about skis from the Sports Creel, the local ski shop in the Valley.

"When I was 15 and 16 years old, I would just sit at the shop, probably annoying them more than ever, watching ski videos, never buying anything and just watching them work and learning about skis," Pete said. "Then I worked there for four years, started tuning skis and working in the back. That instilled a lot of the love of skiing for me."

Raised playing traditional competitive sports like baseball and football, Pete's transition into competitive skiing was a natural one where he started competing in local events.

"I started in all the local comps put on around Spokane and Sandpoint, anything and everything, because all my friends were going. We all wanted to try and win a pair of poles or whatever," he remembers.

After graduating high school from Lewis and Clark in 2007, Pete moved onto college sports and played football for University of Montana Western in Dillon. It didn't take long for Pete to figure out where his real passion lie. "I played for a year at Montana Western and realized that I loved skiing a little bit more than living in Dillon. A small town in Montana wasn't necessarily for me at 18 years old," he says with a laugh.

Pete ended up moving back to the area, where he lived at the base of Schweitzer Mountain Resort. All of Pete's time was either spent working on getting his associate's degree from North Idaho College or shredding Schweitzer's Stomping Grounds Terrain Park.

On the weekends Pete would coach for Schweitzer Alpine Racing Freeride Program and he also started doing a little bit of filming with ski movie makers like Poor Boyz and Toy Soldier Productions.

Through his coaching, Pete was asked by some of the local judges if he could help out and judge some of the local ski events. Pete ended up going through a certification clinic hosted by the United States of America Snowboard and Freeski Association, but soon found himself helping instruct the clinic.

As Pete told me, "They sent out a representative from USASA to put on the clinic. He was a snowboarder but was also teaching the freestyle skiing side of things. During the course, I ended up teaching the majority of the course as far as how things work because he didn't know the terminology as much."

Through progression Pete started judging locally, then regionally, then nationally where he judged the U.S. Nationals. This is where he met Steele Spence, head representative for the Association of Freeskiing Professionals. At that time, AFP was the main governing body for freestyle judging, which included half-pipe and slopestyle. This organization was trying to do something a little different by having a panel of judges that were all ex pros creating a judging format of what the athletes actually wanted to be judged on.

Pete moved onward and upward and went through the next phase of judging certifications with the AFP. This clinic was put on by Steele and former Coeur d'Alene resident Josh Loubek.

"Because I tested highly, they told me it's a possibility they would get me judging some of these bigger contests. I'm 21 years old, I have hair probably halfway down my back, I didn't really want to judge a lot of these contests because the majority of them were my friends who were still competing. At this point, I was torn between judging the contest, the bigger contest, or just float around doing it in the local circuit and enjoying it," he recalls.

"I did the Grand Prix at Copper. That was my first major contest," he continues. "It was half-pipe. I had never judged half-pipe before in my life. I was on a panel full of freestyle ski legends and then me, this goofy kid wearing double XL clothes who had really no idea how to judge half-pipe. They just threw me in there."

Fast forward several years, Pete has judged the X-Games eight times, all the major World Cup events, all qualifying events for the Olympics and an array of other high-profile events around the globe.

"It's been a cool thing," Pete says. "I've been able to travel all over Europe for judging, France, Spain, Switzerland. I went to the 2014 Olympics in Sochi where I lived for a month. I worked for NBC as their freestyle ski expert. I sat in a research room and talked to producers and announcers explaining to them why someone was going to win and what tricks work."

Nowadays Pete has sort of retired from the heavy travel of judging and now spends some time announcing at a few of the high-profile events like the X-Games and Dew Tour.

"Judging was putting its toll on my love for freeskiing because I just overanalyzed every single thing I saw, whether it was my own skiing or other people's skiing," he says. "Stopping that, I've been able to ski a whole bunch more just with friends and family."

Pete is now working on bringing in the next generation of skiers by getting his nieces and nephew out as much as possible.

"I have a whole lot more time to take them up to Mt. Spokane and Schweitzer and get them going," he says. "It's been a pretty cool experience. I've been able to ski with people who I idolize growing up and travel the world going to way more places than I ever could have imagined. Yeah, it's been cool." ♦

The original print version of this article was headlined "Freestyle Judging"

'Tis the season to give the gift of mountain accessories

Remembering the planks that made us