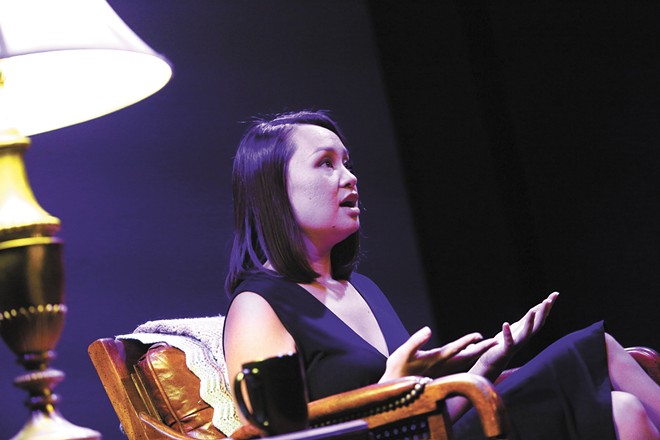 Mental illness, addiction, and trying to find a sense of balance and control.

Sharon, the woman at the heart of Stage Left Theater's new streaming production Squeamish, is dealing with all of these themes — as well as being off her meds in a small town far from her New York City home — in a compelling addition to the theater's "Alone Together" series. It's a blend of horror, dark comedy and psychological thriller rarely seen in live theater.

Squeamish, written by Aaron Mark and published in 2017, is a one-woman play that tells the story of a woman working as a therapist who takes a trip to visit her family for her nephew's funeral. Over the course of the play, Sharon embarks on a journey of self-discovery to regain a sense of control over her life, although how she tries to find control takes a dark turn.

Directing is Lisa Edwards, a local theater artist who has been involved with both Stage Left and Spokane Civic Theatre, and currently serves on Stage Left's board of directors. Squeamish will be the first full-length show she's directed in Spokane.

Squeamish was chosen for the "Alone Together" virtual programming series because not only are Sharon's struggles in the play relatable, Edwards says, it goes outside the box in terms of what audiences might expect.

"It's a little edgy, pushing the boundaries, makes you think, makes you feel," Edwards says, adding that she wants audiences to know that there are a lot of potential triggers in the content of the play, and that audiences should know this is a horror play and not suitable for children.

Since the show will be livestreamed, Edwards says she had to adjust her directorial style to fit the way the play will be filmed. This includes working to meet challenges that might arise when directing a show for the camera instead of a live audience.

Edwards says that when she lived in New York, she was able to see a few horror plays, which was an interesting experience because the audience shared a feeling of discomfort.

"It's different than, like, you see a horror movie, and that's on the screen, that's not live, you know," she says. "Actors [are] doing that in front of you, and so [audiences have] that shared connection."

Young Kwak photo
Squeamish is the first full-length play directed in Spokane by Lisa Edwards, and it's a multi-media challenge.

For Dana Sammond, the actress playing Sharon, the experience of performing in a one-woman show is a whole new ball game.

Sammond says she enjoys the collaborative aspect of theater, how different people come together to work on a show, so she initially put a lot of pressure on herself for Squeamish given that she's the only performer. She was nervous to accept the role of Sharon, but everyone at Stage Left was supportive and encouraging.

She says this show has helped her grow as an actor and not be as harsh of a critic of her own work. Reminding herself that Sharon is just a person telling her story and imitating other people in telling it has helped Sammond on the development of the character as well.

"Every rehearsal, Lisa and I, we always find nuances in the script, there's so many layers in it, you know, and it's so juicy...it really draws you in and the time just goes in a snap," Sammond said.

To Sammond, themes that stand out in Squeamish are trauma, compulsion, identity and relationships. She finds it interesting how each character's relationship to Sharon changes throughout the play, and she enjoys how well-written it is.

"Sharon thinks she is doing what is right for her, but as the audience you're like, 'What the f-word is happening?'"

The added layer of Squeamish being a horror play makes it so that Sammond must remain completely present in whichever part of the show she is in, so as to not get ahead of herself and to keep the genuine aspect of the performance, she says. Although she never imagined she would perform a one-woman horror play, she feels a sense of accomplishment in doing so and has enjoyed the experience.

Sammond hopes audience members recognize that although parts of the play can be grotesque and that many of the characters have severe mental health problems, they are still human beings. For her, Squeamish forces her to confront the depth of humanity, and she hopes audiences feel the same.

"It poses these ethical and moral conflicts in the show, and Sharon thinks she is doing what is right for her, but as the audience you're like, 'What the f-word is happening?'" Sammond says. "It's like a train wreck that you can't look away from."

Edwards wants audiences to enjoy the experience and appreciate Squeamish for what it is, even if it's not light viewing.

"I want people to push through the discomfort that they will feel while watching it and appreciate it for the work of art that it is, and the beautifully crafted story and the beautiful acting that Dana is bringing to the piece. And it has comedic moments, too, it's a dark comedy, so it's okay to find moments funny in this really dark story," Edwards says. "I hope they leave feeling like they've watched something that made them think." ♦

The original print version of this article was headlined "Terror Trip"