If you're sitting close enough to the stage,

you can hear their breathing, just barely, over the music. It comes in short inhales and languid exhales, sometimes in unison and sometimes from a lone member of the quartet signaling winds of change in tempo or mood.

On this crisp Sunday afternoon in January — the one where the Seahawks clinch the NFC championship — the Spokane String Quartet, all clad in black, breathes life into a nearly 250-year-old Mozart composition in the Martin Woldson Theater at the Fox. They sit in a semicircle, constantly working off one another and building on an already rapid pace. Just two violins, one viola and a cello, they are a cohesive, virtuosic unit. Nearing the end of the piece's final movement, the growing tempo seems in danger of derailing at any moment. But reaching the final notes, they've pulled it off spectacularly. Smiles all around, they come to their feet and fold themselves in half for a bow. The audience, mostly older than the players, who range in age from 36 to 58, claps approvingly.

It's rare what this ensemble has, especially for a city the size of Spokane. These four musicians — this configuration together for the past four seasons — exist under their own nonprofit, the Spokane Chamber Music Association. This means there are no governing symphonies or universities to answer to, and they have complete artistic control of their repertoire.

For performing an art form that's supposedly dying, the Spokane String Quartet association has masterfully stayed afloat since 1979, working from a budget held together by donations and ticket sales. What these artists produce appears effortless, but it took a combined thousands of hours of individual practice time and seven university music degrees among them to get here. 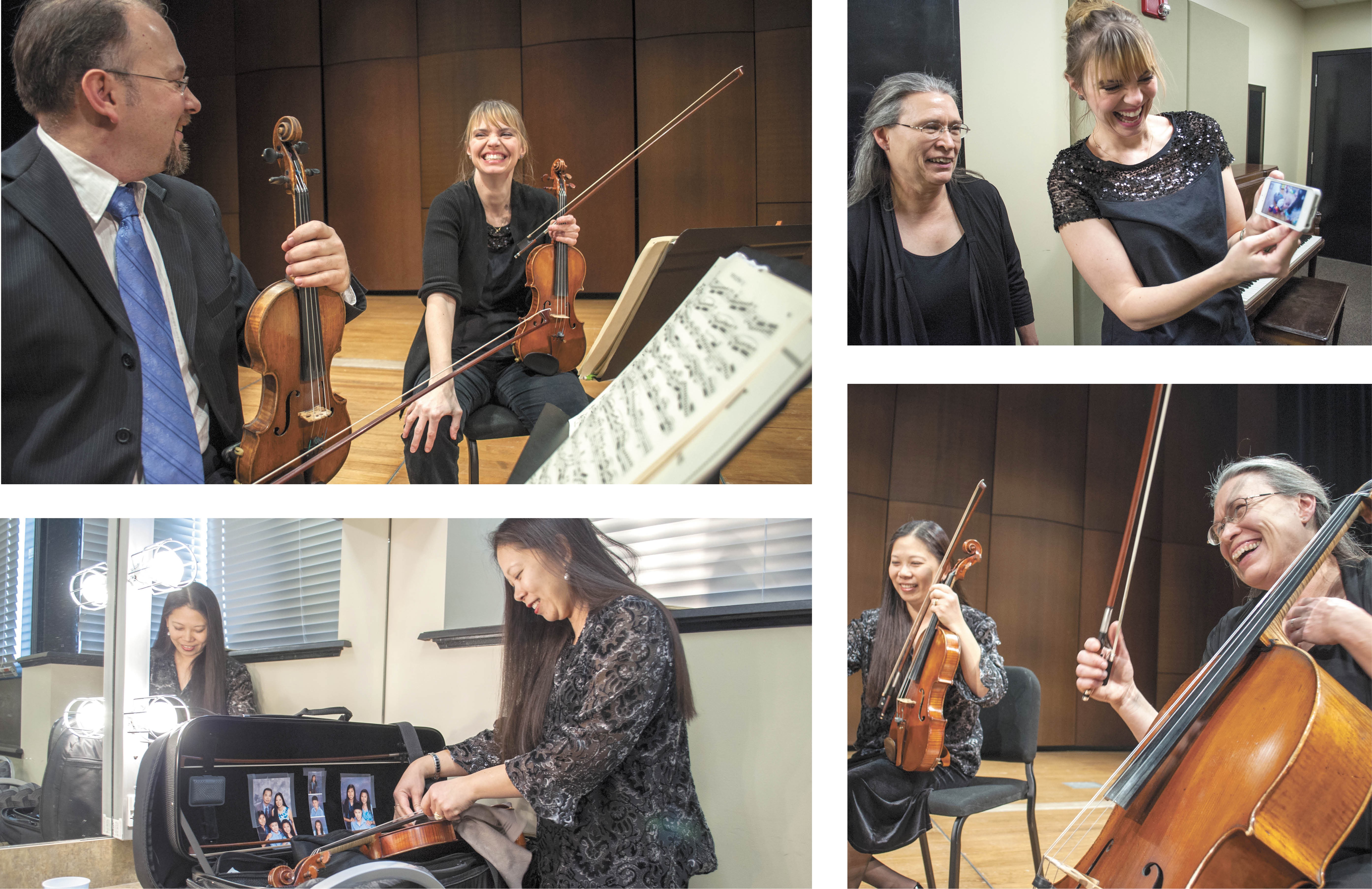 in their cases, the quartet sits around first violinist Mateusz Wolski's dining room table a couple of weeks after their Mozart performance. It's the first time in months they've allowed themselves to just hang out together. There's a Trader Joe's-purchased lunch spread and a tea kettle boiling in the kitchen. Second violinist Amanda "Mandy" Howard-Phillips pops a raspberry into her mouth.

"Why don't we do this more often?" she asks, pulling her long blonde hair behind her shoulder.

"We should," says cellist Helen Byrne, the veteran of the group.

But it's obvious why they don't — they're too busy. Wolski and Howard-Phillips teach, and all are members of the Spokane Symphony. They'd like to see their families, too.

They practice for upcoming quartet performances in this unassuming South Hill home — working up five programs a year, most of which they play twice, once in a theater setting to an average of 250 people and also in local homes. Every Tuesday and Thursday morning they'll push through the noise-blocking concrete door into the basement studio, which Wolski must dust every few days, otherwise violist Jeannette Wee-Yang's nasal allergies will act up. Rehearsals are a relaxed mix of scattered laughter, playing and serious chatter. They listen to one another, everyone's voice equally important. In four years together, there's never been a fight.

Wolski grew up in Poland

"behind the Iron Curtain," during a time when the only means of escape came from athletics or the arts. His parents put him in music lessons as a kid to pump some rhythm into him.

"My mother called me a sturdy child. She worried I wouldn't live to 21 because I kept bumping into everything," Wolski recalls.

His passion for chamber music began in fourth grade when a friend invited him to play in his string quartet. That same friend would go on to win a quartet scholarship at the Manhattan School of Music and invited Wolski to come along. College led to playing second violin with one of the world's top symphonies, the New York Philharmonic. But the constant hustle of NYC didn't make him happy. Invited to audition for the Spokane Symphony's concertmaster position by conductor Eckart Preu, he leapt at the chance. He soon joined the quartet in 2007, taking over the spot vacated by the recently retired Kelly Farris.

Farris, the symphony concertmaster for 37 years and longtime professor at Eastern Washington University, started the ensemble essentially as a quartet-in-residence for the university (all of the members were also faculty in the beginning). It was Farris who started the idea of a governing body for the organization mostly held by the musicians and their friends; that way they would always maintain control.

Especially in recent years, the second violinist position has rotated as musicians move away, but Howard-Phillips, whose husband plays clarinet for the Spokane Symphony, plans to stay put. She has been in the area for about a decade, but only with the quartet for four seasons, and she was the last to join of the current configuration.

Howard-Phillips, who holds a Master's degree from the Cleveland Institute of Music, was raised on Bainbridge Island, growing up ferrying to various violin lessons and Seattle Youth Symphony rehearsals. She was 15 when she first fell in love with Schubert's famed Death and the Maiden quartet at a summer camp. All of its dramatic, ever-changing emotion moved her. She decided then she'd play classical music professionally.

"I had a teacher who said that the string quartet was the most perfect vehicle for human expression — the range of human experience," Howard-Phillips explains. "Just look at what was written for the string quartet; it's some of the best out there. I love playing with the symphony and solo stuff ... but nothing else reaches that level."

This music was performed for kings

and royalty in palaces and halls in the 18th century. Moving into the 20th century, full-time quartets, such as the Guarneri, Juilliard and Cleveland, were able to make a living touring worldwide. The same holds true today, though making money is challenging — which is why many quartets take wedding gigs.

Like the Spokane Symphony, the Spokane String Quartet attracts an older audience, one that traditionally appreciates classical music, or at least believes they should. The quartet members have multiple theories for why younger people aren't as into it. There's the intimidation factor first, but also the idea that finesse comes with age, like learning to appreciate fine wine or expensive French mushrooms. But they maintain that anyone can experience their concerts.

"You don't need to know the history or the technique or what the composer was trying to do. If you hate it or you like it or it grosses you out — all of that's OK," Howard-Phillips says. "If you find your mind drifting off or you're watching the musicians' fingers, that's part of your experience."

when she announced she would be a violist. Herself a concert pianist, she knew how challenging it would be for her daughter to make it as a musician. Wee-Yang's family immigrated to Vancouver, B.C., from Singapore when she was just 8 and they expected much for their daughter.

"My mom said, 'You won't be happy if your siblings are making more money than you are.' My older sister is a doctor and then my younger is a pharmacist," says Wee-Yang, who switched from violin at 13 when her ensemble group needed a viola player. "But then I married a doctor, but she didn't know that at the time. She was a tiger mom; she wanted us to learn a skill but not actually go into it."

Last October, Wee-Yang, a mother of three, was diagnosed with early stages of breast cancer. Removal surgery meant missing one quartet performance. Six weeks later she was back playing with the symphony in late December.

The rest of the quartet nods in agreement around the table.

Wee-Yang did attend the one concert she had to sit out, sitting in the audience for the first time since she joined in 2004. She said the time made her reevaluate what she wanted to do with her life.

"I had cancer, and it's all fine, I'm fine now," she says quietly. "With the limited amount of time you have on this planet, what do you want to do? I realized I'm glad to be a musician; this is what I love doing."

Byrne didn't have that same tranquil reaction when listening to her string quartet from the audience at the most recent concert (two cellists performed as guest artists for one piece).

"It felt like they were cheating on me," Byrne recalls.

In the group since 2000 and with the symphony for 33 years, Byrne, 58, has a penchant for saying whatever she wants. Growing up in Spokane, she started cello in fifth grade. "I wanted to spare my parents from having to listen to that terrible squeaky violin," she says. But she didn't consider being a professional musician until a scholarship came from Northwestern University.

"I knew I was in real trouble when I went to Chicago for school and absolutely hated it," Byrne admits. "I thought, 'What the hell am I doing trying to be a musician, because I'll have to be in a big city for that?'"

But, she says, there wasn't anything else she wanted to do, and she ended up back in Spokane. For now, they're all here. They've made Spokane, and all of its outdoor wonders, their home. That they play in this quartet factors into that decision.

Soon, the party breaks up as Wolski's first violin student of the day is set to arrive any minute. He says he'll scarf down a nutrition bar and some yogurt to get through seven hours straight of violin lessons, his longest stretch of the week.

It's the day of the January concert

, about an hour to showtime, and they're on the stage running through the Mozart piece. In four minutes they'll have to exit the performance area, leaving only enough time to attack the hard parts.

Moments later, while the auditorium fills with people, the violist and cellist are safely ensconced in a dressing room backstage, while the violins take their own solo rooms.

"Jeannette always wants me to brush my hair," says Byrne, looking into a lighted mirror at her long gray hair.

"I just want her to look good out there," Wee-Yang says with a laugh as she pulls her own long, black locks away from her face. She doesn't touch her viola at this point. She's been playing since noon and there's nothing she can improve now, she says. Byrne has other ideas.

"I'm working on some cello tricks over here," she says, floating through a couple of the thorny parts in her music.

Meanwhile, over in violinland, Howard-Phillips is cooing over iPhone photos of her then-7-month-old son in her practice room, trying to relax. Wolski smooths out parts he says aren't perfect yet (not that the average ear could tell).

Finally, there are 10 minutes to go before the show starts. The players' nervous excitement fills the darkness of stage right, wiggling fingers and wrists. Byrne leaves to wash her hands.

The stage manager (who understandably has the NFC championship game muted on his backstage TV) signals that it's almost time for them to get out there. They form a tight circle.

They collectively take a deep breath and Byrne leads them out into the hot lights and refined applause. ♦