Spokane's most famous couponer shows how to take advantage of the system. 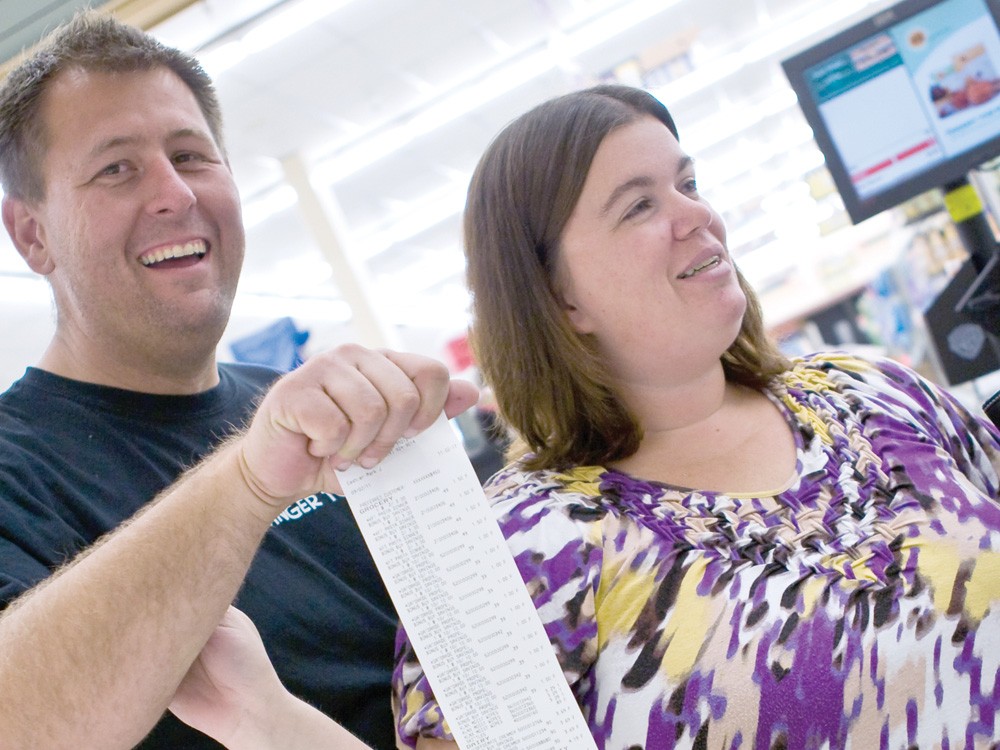 Stephen Schlange
Wanna save? You could learn something from John and Tammilee Tillison.

The 10-pound coupon binder gives Tammilee Tillison away. The behemoth black book is one of two that she carries wherever she goes. Today, it serves as the command center of her cart, beneath a purse and pile of re-usable bags.

At 9:30 am, she cruises a Spokane Valley grocery store (which asked to keep its identity unnamed in this article) in flip-flops and floral-painted toes. Her husband, John, wears a T-shirt that reads “Have you hugged a park ranger today?” The store manager runs up, greets them by name, and hands them a coupon he just received today: $1 dollar off Starbucks Frappuccinos.

“We’re pretty excited about this one,” John says. The Medical Lake couple are extreme couponers, and this store is one of six in their “regular loop” of stops. “I’ll go anywhere if the deal is good enough,” Tammilee says.

Technically speaking, Tammilee is the couponer. Her husband is a park ranger for Washington state whose “specialty is beer rebating” and today, they’re drinking for free.

John found a coupon on a pyramid of Pabst Blue Ribbon. The coupon offers free beer with the purchase of $100 in groceries. Tammilee can do that.

“Free beer tastes so good,” she says. Getting deals has become a lifestyle for Tammilee, a stay-at-home coupon blogger. She’s analytical, impeccably organized, and bubbly. Two and a half years ago, her job as a risk management specialist relocated. She chose to stay at home instead and put her MBA to good use by penny-pinching and clipping coupons.

“I started with one coupon that was worth a quarter at the Safeway on Sprague. Afterwards I walked to my car and told my husband I saved a quarter and he thought I had lost my mind.”

But last year, the couple saved more than $10,000. Tammilee inputs her receipts in an Excel spreadsheet that calculates her savings, and the couple puts a percentage of their savings to good use: a new house, trips to Maui, the Baltic Sea and the Caribbean Islands.

And last year, the couple also donated almost 500 pounds of food to the Medical Lake Food Bank. Their goal this year is 1,000 pounds; the $1.50-per-pound tax write-off is a nice incentive, too.

In May, the couple was featured on TLC’s Extreme Couponing. In the episode at the Fred Meyer on South Thor Street, Tammilee flipped a $640.84 grocery bill into $17.71. John says he ate food from that shopping trip for lunch just yesterday.

“Shopping for the show was definitely not normal. I lived in Fred Meyer for about a week and a half before they filmed to make sure my coupons were in order.”

Today’s trip is different than that. “Raw shrimp for only $5.99 a pound!” a woman blares from the speakers. The entire store smells like seafood. Tammilee “soaks in the air conditioning” on the hot day and heads first to the hygiene aisle for four bottles of Pantene Pro-V. She flips through her binder and fans coupons in her hand like a deck of cards.

John follows, two steps behind. “When she first started using coupons, she would accidentally leave a trail just like breadcrumbs behind her,” he says. “It was a lot easier to find her.”

Now he mostly knows to follow and to ask questions. “How many do I get?” he asks, referring to frozen Italian meals.

“Four,” she says “Sweet,” he replies. She giggles.

Tammilee says that couponing has changed her perception of money.

Her goal is to make couponing easy for someone who works 40- to 60-hour weeks like she used to. Tammilee’s website, Tammileetips. com, posts links to online printable coupons. She explains coupon terminology, coupon scams, and the easy mistakes to make. Viewers can even print her shopping list and the associated coupons for the day.

“I probably check 10-12 daily deal sites a day,” she says. “I have a special email for coupons and rebates.” Websites like Facebook, Groupon, LivingSocial, SaveMore, and Restaurants.Com are among her favorites. She also receives four copies of the Sunday Spokesman-Review and mentally files away the sale dates.

“She has a memory like you wouldn’t believe,” John says. “Unfortunately for him,” Tammilee says, giggling. She clips and organizes coupons while they watch TV at night. She blogs about couponing. She teaches couponing classes for free at local libraries.

She tosses two bags of salad greens and a bunch of bananas into the cart. The couple make their way to the cashier and place frozen pizzas, Propel Water, Coffee Mate, shampoo, pasta and soy milk onto the circular black belt at the register.