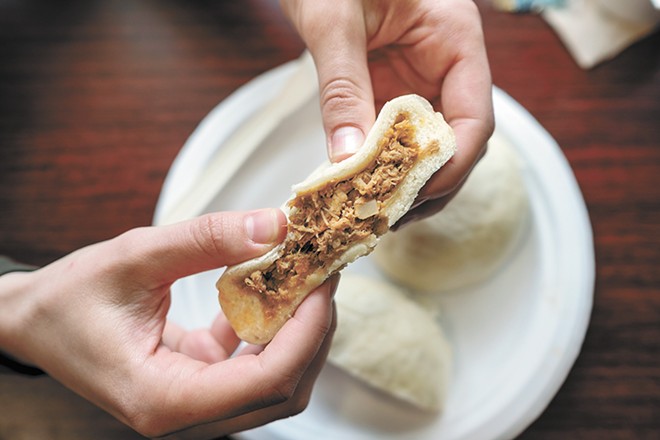 Jeff Skaife invited his friends over for dinner with one rule: They had to tell the truth. How'd the food taste?

Bringing out one bun after the next, Skaife handed them notecards to write comments and suggestions about his newest recipes.

That "how could this be better" thinking is how Tasty Bun, the new small eatery located just off of Gonzaga University's campus, got started.

When visiting Seattle's Chinatown, the Tasty Bun chef and owner ate steamed buns — also known as bao or baozi — at a restaurant and left disappointed. He didn't enjoy the texture of the dough, or the size of the buns, so he decided to experiment.

Working as a cook as a young adult around Spokane familiarized Skaife with classic recipes that gave him the basics to put his own spin on the palm-sized provision fusing American flavors with Asian cuisine.

Soft, puffy bao buns are made from a flour-based dough that's formed into round balls after rising, and then stuffed with filling, pinched close and steamed to cook.

What Skaife came up with for Tasty Bun are four far-from-traditional fillings, all priced at $3 each. The vegan bun is filled with ginger-infused barley, mushrooms and carrots, creating a flavor that truly rivals a steamed pork bun. Tasty Bun's Asian pulled pork offers a hearty taste of Skaife's own kitchen, fusing barbecue and manapua; the latter is Hawaii's version of char siu bao. Two other bun fillings are Skaife's recipes for sloppy Joes and Swedish meatballs.

Most recently before opening Tasty Bun, Skaife was a carpenter for Spokane Public Schools and was unhappy with his daily work. Despite the financial risks involved with opening a new restaurant, the 56-year-old took a chance on pursuing happiness and opened Tasty Bun.

"It's kind of one of those things where if you wait for everything to be perfect you're never going to do it," Skaife says. "So I talked to my wife... and you know life's too short, so we said 'OK, let's do this.'"

The couple found a small space near Gonzaga's campus and knew it had exactly what they were looking for — a community.

"I've just been so happy with the interactions with the kids and everybody," Skaife says. "It's fun to just get to be yourself and be proud of something that you've done."

In the first few weeks after opening, Tasty Bun already accumulated a crew of regulars. Skaife cherishes those developing friendships.

"Just getting to know the young people, like a girl named Emma," Skaife says. "I know what she's going to order when she comes in, and she always stands at the counter and we always talk. Like I know what she gave up for Lent. You just get to know the people and that's kind of what we were looking for." ♦