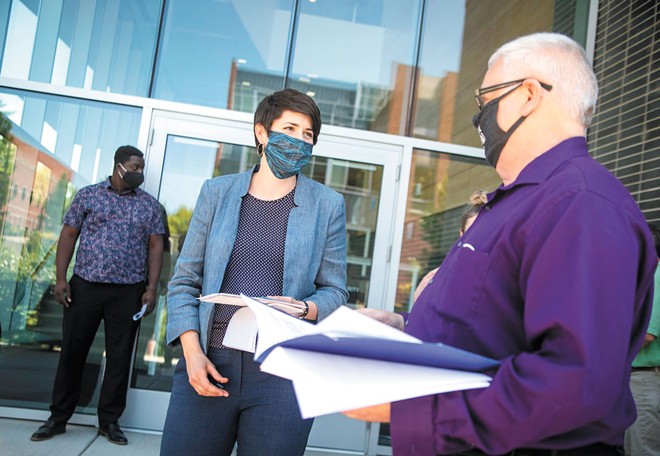 Libby Kamrowski photo
Katie Zinler (center) is a lead organizer with the Spokane Alliance, a coalition of 30 progressive groups.

The Spokane Alliance isn't just one organization: It's a coalition of 30. They include left-leaning churches, like Salem Lutheran Church and the Unitarian Universalist Church of Spokane. They include labor groups, like the Spokane Education Association, Washington State Nurses Association, and the local firefighter's union.

In total, that's about 30,000 people in Spokane represented.

For 19 years, they've been fighting for a wide variety of progressive causes: Back in 2015, they rallied support for mandating safe and sick leave for most businesses in Spokane.

"When we started, 40,000 people in Spokane couldn't take time off," says Katie Zinler, lead organizer with the Spokane Alliance.

The next year, Washington state voters approved an initiative that required not only a more ambitious sick leave policy, but a hike in the minimum wage.

"Because Spokane had passed that legislation, it was a signal that the whole state of Washington could," Zinler says.

The alliance doesn't just lead these campaigns, it trains their members to become more savvy about launching their own activist efforts. The group has pushed to ensure that developer incentives rewarded low-income housing in the West Central neighborhood and has sought ways to push back against the distribution of racist flyers.

Recently, the group lobbied the Spokane Board of County Commissioners to try to ensure that the $90 million in federal funding provided by the CARES Act didn't just go to stabilizing businesses, but also issues like housing and child care.

After all, child care was an investment in business, the group argued.

"If all of these child care centers close, we won't be able to have an economy when people go back to work," Zinler says. ♦

The original print version of this article was headlined "Allied Forces"