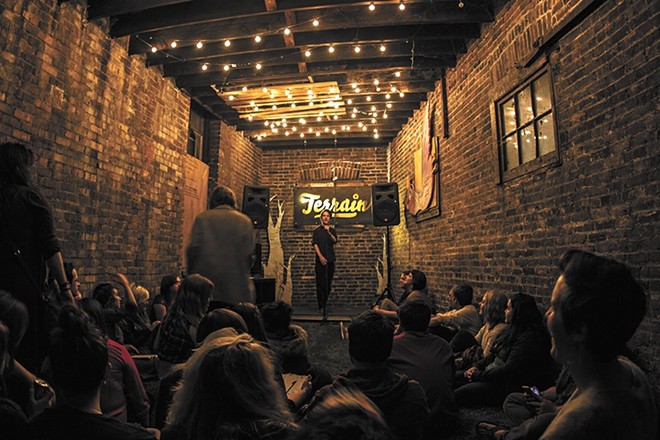 Young Kwak
Terrain is navigating how to survive through the current crisis while still serving the region's artists.
The onset of the coronavirus pandemic and its assorted closures, postponements and delays has been particularly stressful on the arts community and its supporters.

Beyond music gigs, First Fridays and gallery shows being canceled, many artists are part of the service industry and so-called "gig economy," both of which are being hammered, too, through this economic and health crisis.

For Terrain — the Spokane arts organization that hosts large-scale events like its namesake festival and operates a gallery and retail store devoted to local artists — coronavirus is challenging how it can serve the artist community that relies on Terrain to find customers for its work, and even its own survival as an organization. 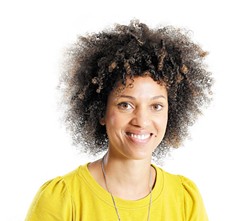 "I'm struggling in a couple of different ways," says Ginger Ewing, Terrain's executive director. "I'm struggling to keep Terrain afloat, the actual entity afloat, in all of this. And I'm also struggling to get artists the resources they need."

The artists she's talked to express the "concerns, worries and frustrations" many of us feel at just not knowing whether or when the crisis will pass. Some artists who already have a fairly strong online sales presence might be able to weather the storm, "but that isn't the vast majority of artists on the whole," Ewing says.

Terrain, through its various events and its River Park Square retail store, From Here, was able to put nearly $500,000 directly in the pockets of artists in 2019, Ewing says. If large gatherings are banned for any length of time that would cancel Terrain's summer Bazaar event or its annual fall festival, you can imagine the economic ripple effects for local artists.

From Here was feeling the pinch of the pandemic even before Washington Gov. Jay Inslee closed all nonessential retail outlets. The store had proactively closed to the public until the end of March, forcing Ewing to lay off four employees, "which was absolutely gut-wrenching. I had to learn how to lay off employees on the fly." At the same time, Ewing had to plan for the store to potentially reopen April 1, so she was doing online interviews for a new store manager (a process that had begun before the virus emergency) at the same time.

It's an emotional rollercoaster, certainly, amid a situation seems to change almost hourly. Ewing says she's been in near-constant touch with artists and groups like Washington's Artist Trust, as well as chatting in Facebook groups of arts administrators, "sharing resources and information" on how best to navigate the crisis.

As she's watched the political sphere discuss how to address the economic damage being done by the pandemic, Ewing's seen a lot of talk about helping everyone from small businesses to large corporations, but not as much about nonprofits, "and specifically arts nonprofits."

"Oftentimes the arts — and we're really advocating and trying hard to change this narrative — they're seen as a nicety versus a necessity, or that they're just entertainment," Ewing says. "We believe really strongly that it's the heart and soul of our city."

Even as there have been moments of deep despair, Ewing says, there have also been some "really incredible things happening. Individual people who have immediately written checks to our organization, people who've reached out and asked how they can support us, how can they help support artists."

To that end, there are a few ways you can help support Terrain and the artists it works with:

MORE GROUPS THAT COULD USE A HAND

Spokane Arts has established the Spokane Artists & Creatives Emergency Fund to provide small grants to artists who lost income due to canceled gigs, events and shows.

The Bing Crosby Theater encourages donations to the Friends of the Bing to offset losses to canceled shows.

The Northwest Museum of Arts & Culture had to cancel its April fundraising gala, but you can buy a tax-deductible “virtual ticket” or “virtual table” to support the museum.

The Art Spirit Gallery in Coeur d’Alene has its staff working for free for the next 30-60 days, but they could use donations at their GoFundMe page to keep their doors open.

Emerge in Coeur d'Alene suffered a fire a January and have actually just found a new home for its gallery and class spaces. Emerge is still raising money to replace what was lost and to prepare its new home, via a GoFundMe page and by selling gift certificates.