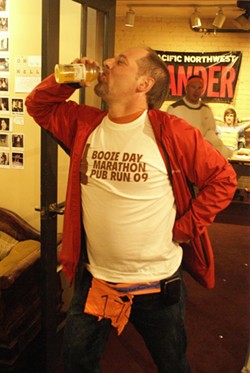 Break out your bowler hat and monocle for tonight's steampunk-themed release party of Thuy-Dzuong Nguyen's multimedia novel The Truth Lenders at Empyrean. Nguyen's book weaves a crazy story about free speech, crustacean vending machines and talking pterodactyls. And the musicians who made music for her book will play tonight's party: Kevin Long and Band, Ross Robinette and former Spokane musician/producer Joe Varela. (Note: Dane Ueland has canceled his appearance at the show.) Read our story about Nguyen's book here. All-ages. $5. 7 pm.

She's a lady but she's tough on the mic. Jaeda, the sole lady in local hip-hop collective Bad Penmanship, takes the stage tonight at Sunset Junction to support One Gun Galleria's CD release show. One Gun — the musical project of Elijah Mink — was supposed to release this CD months ago but put the brakes on for various reasons. He says it's on for real tonight. Read our review of Mink's record, If You Hear Birds Chirping it's Going to Be Clear here. 9 pm. $5. 21

Cannibalistic spirits and warring frost-clans collide tomorrow night at the Blvd. It's your one-stop-shop for pure, unadulterated metal ecstasy: Priestess, Bison BC, Black Cobra and High on Fire. The feeble-minded will not survive. The madness starts at 7 pm. $10. 21 .

For those willing to run Bloomsday with a hangover (or for those just looking to wear a silly workout costume and get drunk), Booze Day has arrived. It's a downtown bar pub crawl that starts and stops at Empyrean, and if you complete it you get a t-shirt and a dance party by the Booze Fighters, Voodoo Church and the Longnecks. The "run" starts at 5:30 pm and will cost you $12. Gotta be 21 to run.