The night before that I performed at a place named 5th St. Cornucopia in Eugene, Oregon.  This was my first show I have ever played in Eugene, so I wasn’t sure what to expect. Fortunately, I have a cousin and a few friends who live there and they were able to supply a healthy amount of people. The crowd was a fun and rambunctious, but they were also very attentive and kind. It was a very fun show!

The days leading up to that show were filled with sight-seeing and touristic tendencies such as riding a trolley in San Francisco and going to the pier in Santa Monica. When I was booking this tour, my girlfriend and I had decided it would be fun if she flew down and met me in San Diego and then we would drive back home together and visit some cool places.  So we did… and it was a good time! 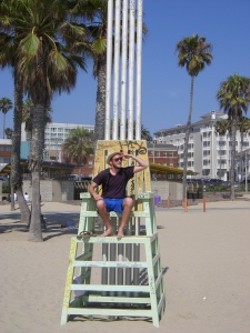 This was my first real tour that I did all by myself, playing my songs and selling my CDs. I was a little apprehensive and unsure of how it all would turn out. Final verdict: It was great! Traveling by myself for most of the time was at times peaceful and at times lonely, but the people who I met along the way made me feel like I had friends I never knew of, in towns such as Santa Cruz, Sacramento and Ashland.

Granted, the way I scheduled the tour was a little different in that many of my closest friends from Spokane were down in San Diego for a wedding, so I kind of cheated when comes to the whole "lonesome traveling troubadour traversing the California coast with nothing but a guitar and a voice" thing.

Overall, every show was better than expected … but I had very low expectations. I was encouraged to continue writing and performing with every show. I am new at this touring thing, so I am not yet tainted by "the road." I hope I never become that way, but if I do, I guess that means my career is going well, right?

There were a few times during some of the longer drives that I thought about what it is that I am doing: I drive somewhere I have never been before and then I stand in front of strangers and sing songs that I wrote and then they clap for me. I talk to them if they want to talk, they might buy a CD or just say ‘good job and thank you for coming to my town.’  How lucky am I? Very.